Home » Archive » Top News » Conagher Gets His Shot, Saratoga's Allen Jerkens Up Next

Conagher Gets His Shot, Saratoga's Allen Jerkens Up Next 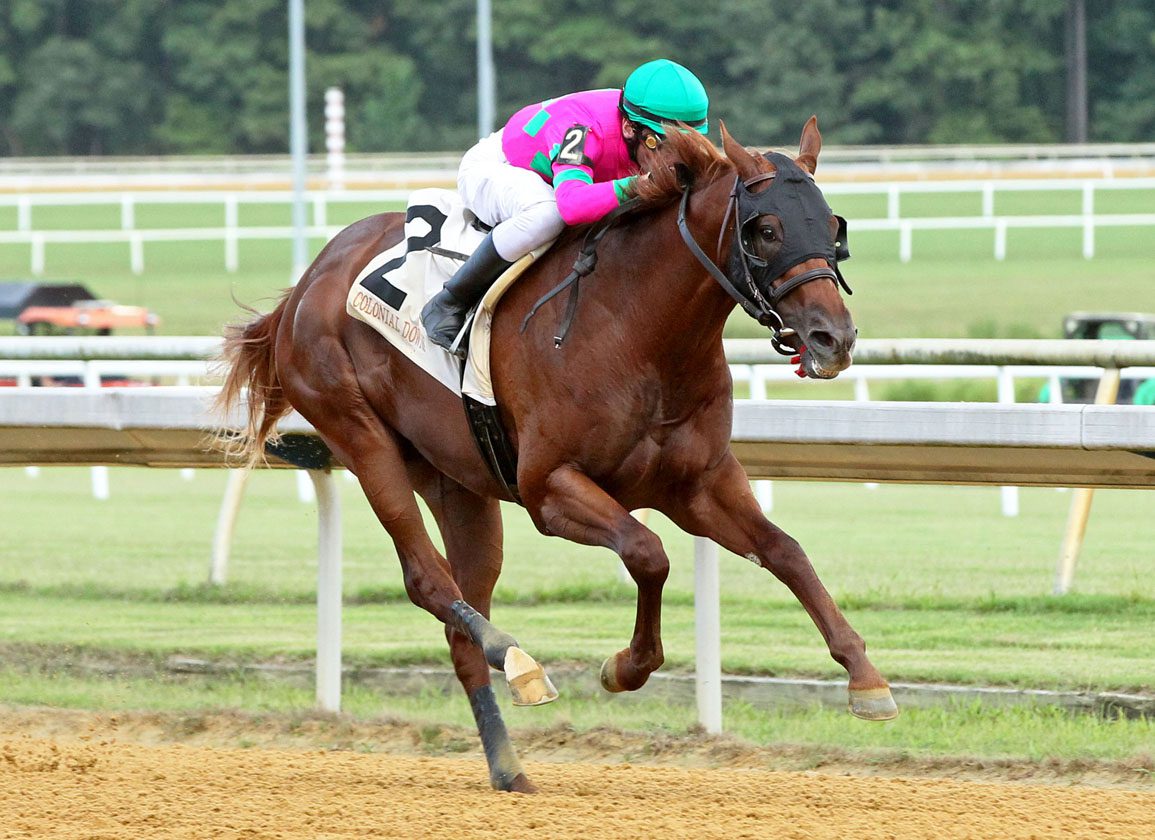 The speedy sophomore Conagher (c, 3, Jimmy Creed–You Should Be Here, by Niagara Causeway), a very sharp wire-to-wire winner of Monday's Housebuster Overnight H. at Colonial Downs, will get his chance at the big leagues in the GI H. Allen Jerkens Memorial S. at Saratoga Aug. 27.

“We'll find out how high we can go with him,” trainer Michael Tomlinson said. “Saratoga is an exciting and fun place to be. The atmosphere is unmatched, that's for sure.”

Off as the 2-5 favorite from his inside draw, Conagher flashed his usual speed and was hounded through early fractions of :22.37 and :44.44. He began to shake loose as they straightened for home and kept finding in the stretch beneath Joe Rocco, Jr. to score by 2 1/4 lengths while stopping the timer for seven furlongs in an eye-catching 1:21.42.

“This horse is probably as fast a horse that I've ever trained,” Tomlinson said.

For comparison, the only 3-year-olds to run faster races around one turn this term are Jack Christopher (Munnings) (107 Beyer/GI Woody Stephens S.) and Charge It (Tapit) (111 Beyer/GIII Dwyer S.), respectively.

Conagher is likely to face off again with last year's aforementioned GI Hopeful S. winner Gunite as well as the ultra-talented Jack Christopher in the highly coveted stallion-making race at the Spa later this month.

“We obviously beat a good horse in Gunite,” Tomlinson said.

“That was his first race off a layoff, but we beat him the right way. So, we'll see. It sure looks like Gunite likes Saratoga, his record there is impeccable. Then you've probably got Jack Christopher coming back [after a third-place finish in the GI Haskell]. Might be a big challenge for us. It's gonna be a loaded race for sure.”

Conagher was turning back in distance for the Housebuster after giving two turns a shot while making his stakes debut in the Iowa Derby July 9. After leading by four lengths in the stretch, he held his own in defeat, finishing second behind next-out Iowa Stallion S. winner Ain't Life Grand (Not This Time).

“We weren't disappointed, but just decided that he's a better sprinter than he is going two turns, so we backed him up,” Tomlinson said. “We wanted to give him a prep race before we went to New York. I thought the race fell in line timing wise just fine. Just felt like he needed a little sharpener as opposed to having to work him two or three extra times.”

“I've known Bobby and Jason McCutchen for a long time and have bought several horses off them,” Tomlinson said. “When I was told that Bobby was high on this horse, I ventured over to Keeneland and took a look at him after he ran that one time. We made a deal and purchased him for two of my good owners. I put them together and the rest is history. They sure have had a lot of fun since.”

Bred in Kentucky by La Bahia Stud Inc., Conagher sports a record of 9-4-3-1 and career earnings of $312,353. His lone off-the-board finish took place while making his 3-year-old debut on the Gulfstream grass in February. That was his first start since graduating at fourth asking over the Colonial lawn last July.

“He just needed some time,” Tomlinson said of the layoff. “Little 2-year-old infirmities, so we gave him all the time he needed. It felt like he was a nice colt all long.”

Since launching his training career in 1991, the Louisville-based Tomlinson has tightened the girth on 635 winners, led by graded stakes winners like Barbados (Speightstown), Jordan's Henny (Henny Hughes), Kettleoneup (Victory Gallop), Sir Cherokee (Cherokee Run) and others. Barbados, winner of the 2015 GIII Hutcheson S., also finished third as the favorite for Tomlinson in that term's GII Amsterdam S. at Saratoga.

“I'm kind of a little guy,” Tomlinson concluded. “I have a medium-sized stable with about 40 head. We've had some good horses in the past. But we've had a little bit of a drought for a few years. It's kind of refreshing to have a good one for a change.”