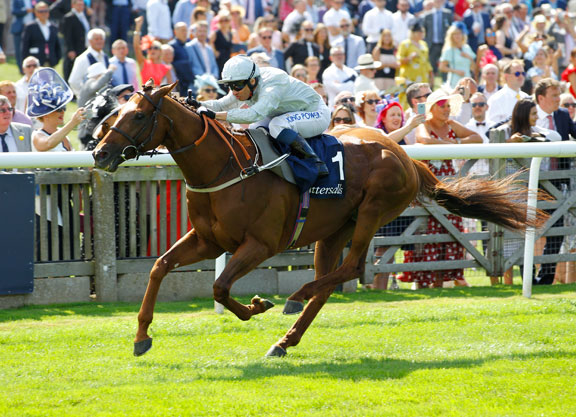 If his success in the G2 Jockey Club S. was put down to a fluke, Communique (Ire) (Casamento {Ire}) proved in Thursday’s G2 Princess of Wales’s S. that he must now be taken seriously as he defied a three-pound penalty with a degree of authority. Having surprised the subsequent G1 Coronation Cup and G2 Hardwicke S. winner Defoe (Ire) (Dalakhani {Ire}) and the eventual G1 Grand Prix de Saint-Cloud heroine Coronet (GB) (Dubawi {Ire}) when making all in the May 4 Jockey Club on Newmarket’s Rowley Mile venue, Sheikh Hamdan bin Mohammed Al Maktoum’s imposing 4-year-old was forced to carry the extra burden as a result in this July Course feature. Always content tracking the 3-year-old Dashing Willoughby (GB) (Nathaniel {Ire}) in second, the 11-1 shot was sent past that G2 Queen’s Vase winner by Silvestre de Sousa approaching the final two furlongs and stayed on strongly to keep Mirage Dancer (GB) (Frankel {GB}) at bay and record a 1 3/4-length success.

Communique, who had beaten the potentially top-class Zaaki (GB) (Leroidesanimaux {Brz}) by a short head receiving 12 pounds from that subsequent G3 Diomed S. winner on his first visit to Newmarket in a 10-furlong handicap at this meeting a year ago, also captured the 12-furlong Listed Godolphin S. on the Rowley Mile in September which helps make a 100% record on the county’s two tracks. Not as effective at Epsom, as he proved when fourth in the May 31 Coronation Cup having set out to make all there, he had excuses for his Royal Ascot flop as he lost a front shoe when last of eight in the June 22 Hardwicke. Trainer Mark Johnston excels with types such as him and there is still more to come from the industrious winner. “He’s had a couple of goes in Group 1s and come up short, but on his day he’s that class,” he said. “He’ll get another shot at a Group 1 some time soon. He is in one at Hoppegarten and another Group 1 in Germany. That would be the sort of stepping stone before having a go at another Group 1 in England.”

Khalid Abdullah’s racing manager Teddy Grimthorpe said of Mirage Dancer, who was runner-up in this for the second consecutive season, “He has run a good race, but he couldn’t find that turn of foot. Again he has been consistent considering where we were at Christmas. He is still rolling and hopefully will go on some more. I would certainly look at going back to Goodwood, as he has won a few times there. They didn’t go quite fast enough for him. He will get there one day in a race like this.”

The jury is out on last year’s G1 Epsom Derby hero Masar (Ire) (New Approach {Ire}), who was again too free and faded to be last of the sextet. “He was in as good a nick as we could have him. He was fit and well,” trainer Charlie Appleby said. “I hate to use an excuse when a race doesn’t pan out for you, but they didn’t go much of a gallop and he was just unfortunately over-racing on the outside and it paid in the end. As usual we hope he comes out all right, then we will make a decision on what we do with him. There are no immediate decisions.

“On his bit of work last Wednesday, I had no excuses coming into today. He had ticked every box. The great thing about this game is that it levels you. With any of these horses coming off a lay-off, you want to get some confidence behind them and get their head back in front. That is what I was hoping to achieve today. Unfortunately it has not happened so we will have to regroup.”