Come Dancing Back On Home Court For Vagrancy 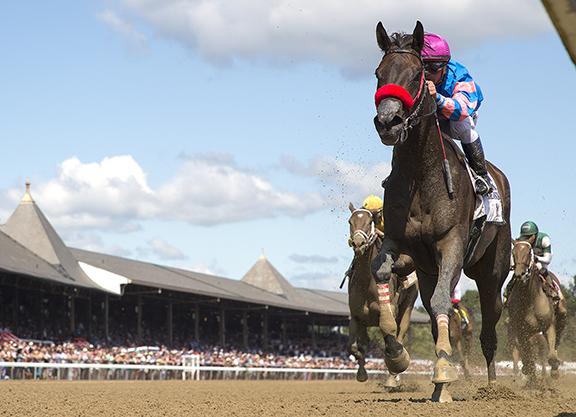 Come Dancing (Malibu Moon), a five-time stakes winner in New York, returns to the Empire State after making her last two starts elsewhere as the likely favorite in the GIII Vagrancy H. in Belmont. Winner of the GIII Distaff H. and GII Ruffian S. last spring, the dark bay checked in second to champion Midnight Bisou (Midnight Lute) in this venue's GII Ogden Phipps S. last June. Returning to winning ways with a dominant score in the GI Ballerina S. at Saratoga in August, she followed suit with a decisive score in the GII Gallant Bloom H. at Belmont a month later and finished off 2019 with a sixth in the GI Breeders' Cup F/M Sprint S. Nov. 2. Come Dancing made her last start under the name of Hall of Fame legend D. Wayne Lukas, fading to last in the GI Apple Blossom H. at Oaklawn Apr. 18, but has since returned home to the barn of Carlos Martin. Come Dancing enters off a pair of bullet works in Elmont, most recently breezing five panels in :57 4/5 June 15.

“We wanted to just keep her fresh,” Martin said. “It didn't look like she was out of a canter. She was just so smooth. It's just one of those things where the track is extremely fast and she came out of it great.”

A close runner-up in the 2018 Breeders' Cup F/M Sprint, Chalon (Dialed In) was second in both the GIII Bed O'Roses S. and GII Honorable Miss H. last term, but returned to winning ways in the Roamin Rachel S. at Parx Sept. 2. She was fourth when last seen in Keeneland's GII Thoroughbred Club of America S. Oct. 5.

Dual graded winner Royal Charlotte (Cairo Prince) looks to return to the winner's circle in this spot. Capturing the GII Prioress S. at Saratoga Aug. 1, the gray was off the board in the GII Raven Run S. at Keeneland Oct. 19 and was subsequently shelved for the season. She finished second as the favorite in her seasonal bow in the mud in Belmont's Harmony Lodge S. June 5.

Also exiting the Harmony Lodge is the Bob Baffert-trained Mother Mother (Pioneerof the Nile), who finished fourth in that test and stuck around town for this one. Third in the GI La Brea S. Dec. 28 at Santa Anita, she won the Kalookan Queen S. there next out Jan. 12 and was second to La Brea winner Hard Not to Love (Hard Spun) in the GII Santa Monica S. Feb. 15. Mother Mother was fourth, but promoted to third in the GIII Desert Stormer S. in Arcadia May 17 prior to her last out effort here.