Collmus to 'Pinch Hit' at Del Mar This Summer 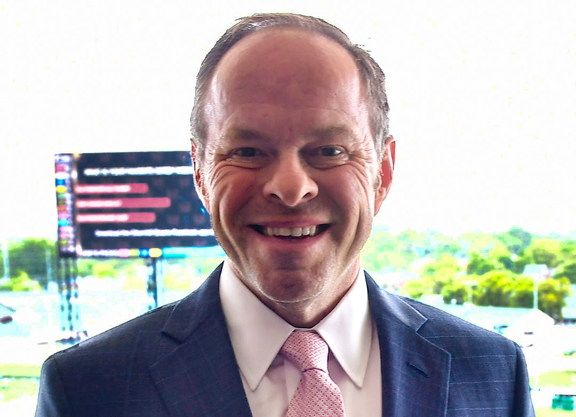 Larry Collmus, the voice of the Triple Crown and the Breeders' Cup on NBC, will become the announcer at Del Mar this summer when he steps in on a “pinch hitting” assignment for the track's regular caller, Trevor Denman. Stemming from health concerns surrounding the COVID-19 pandemic, Denman, who has been Del Mar's announcer for 36 years, recently informed Del Mar officials that he and his wife, Robin, would remain at their Minnesota farm this summer.

“When Trevor told us of his situation, we naturally had to respect what he was feeling,” said Josh Rubinstein, Del Mar Thoroughbred Club's president and COO. “We immediately worked up a short list of possible replacements and Larry was the man we zeroed in on. Happily, he said he was available and would be delighted to call our meet. We're very pleased to be able to have him be the guy in our booth when we're off and running on July 10.”

Collmus, 53, has manned the mic at various racetracks including Golden Gate Fields, all three NYRA tracks, Gulfstream Park, Churchill Downs and Monmouth Park. Prior to this summer's stint, Collmus also called the Breeders' Cup races at Del Mar in 2017.

Denman, who has called every race at Del Mar since taking over for the late Harry Henson in 1984, will return to the seaside track for its fall season scheduled from Oct. 31 to Nov. 29.