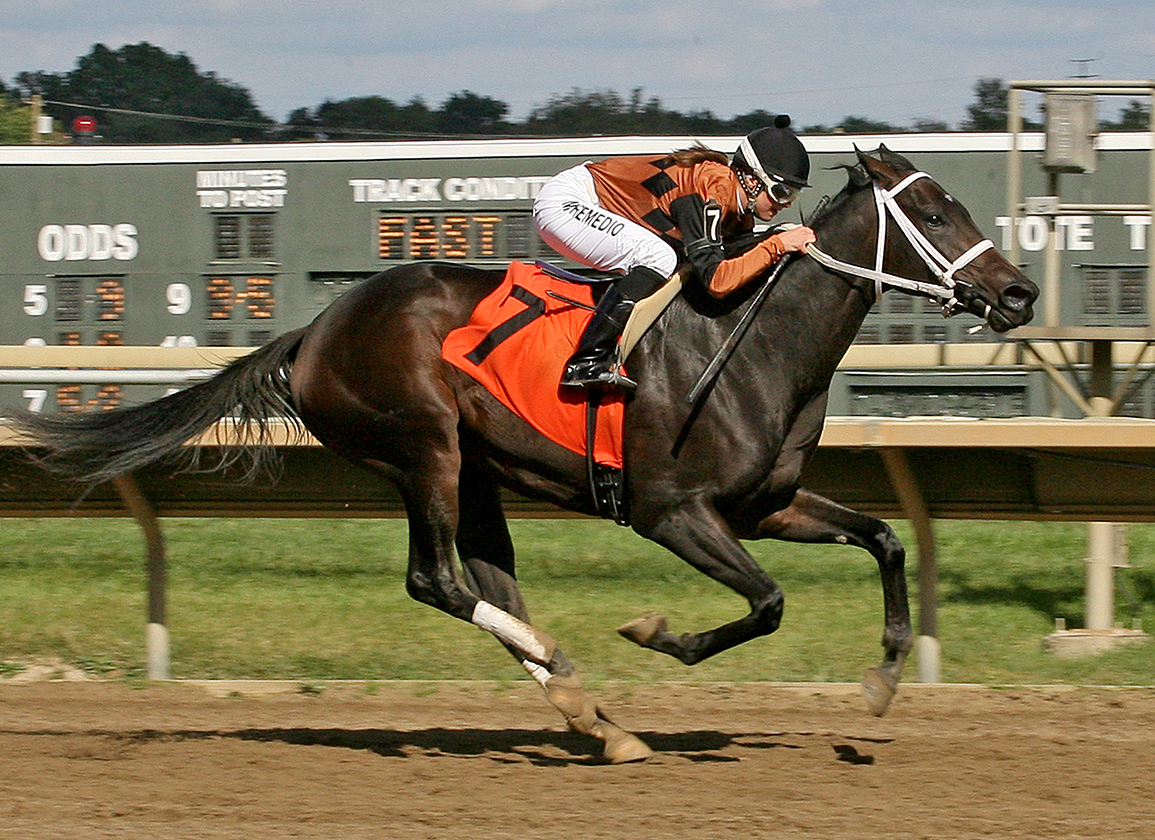 A fairytale, and an authentic story of “true love”, came to a heartbreaking end Thursday when Tom and Sue McGrath of Swilcan Stable lost Vero Amore (Mineshaft), the rags-to-riches dam of champion Vequist (Nyquist).

Her abrupt surrender to colic came as a terrible shock: Vero Amore was in her prime, having just turned 11, and was carrying a sister to the 2020 Eclipse Award-winning 2-year-old filly.     Tom McGrath stressed his thanks to Brookdale Farm, where she was a long-term boarder, for their characteristically alert and prompt attention; and also huge sympathy for Glenn Bennet, a great friend who had bought into the mare only last summer.

That investment has obviously proved desperate luck, for Bennet, but equally there could be no deeper grief over Vero Amore than for McGrath, who raced her in the Swilcan silks after trainer Robert E. “Butch” Reid Jr. found her for just $15,000 at the Timonium 2-Year-Old Sale in 2013. She managed serial stakes placings, including second in the GII Black-Eyed Susan S.

McGrath believes that her third foal, from the first crop of Nyquist, was never even vetted when a $120,000 RNA at the Keeneland September Yearling Sale. Vero Amore herself, after all, was responsible for the only black-type under the first three dams. After her debut at Parx, however, there was a lot more interest and he accepted an approach from Gary Barber and Adam Wachtel while retaining a leg. McGrath duly enjoyed the ride as Vequist won the GI Spinaway S. by nearly 10 lengths and ran second in the GI Frizette S. before confirming herself class leader at the Breeders' Cup. Though confined to a single sophomore start, she joined the Spendthrift broodmare band at Fasig-Tipton in November for $3.4 million.

But just as the unpredictability of the Thoroughbred yielded this fantastic dividend, now McGrath has had to absorb this “gut punch” out of nowhere.

“Yes, it's a double-edged sword, isn't it?” he reflected Friday. “She was a blue-collar girl, picked up for $15,000, and yet she's got the moxie to do all that. I don't want for much in life, but I also grew up blue-collar–and this kind of thing just doesn't happen. People spend incredible amounts of money trying to duplicate what we did on a shoestring.”

He remembers Reid calling and saying: “Got a cheapie for you!”

“But he loved her,” McGrath recalls. “And with these horses, you start the dream machine on the first ticket. You punch the clock and start dreaming–and she never let us down. There could be no more perfect animal. She was a sweetheart, she did everything right, she was a great mom. She didn't know what she cost, she was an all-star. The places she took us, it was just crazy.”

Vero Amore was not very big, but she was a golden nugget: all heart.

“It was like a passion she had,” McGrath said. “That way she thrived with her racing, the way she would always just try. That was what made me want to carry on with her. You don't just go breed, without a notion. It's not cheap: you get your monthlies, your stud fees, and it's a two- or three-year commitment. But even setting Vequist aside, this has been a whole other side of the business that a lot of people don't get to experience, and it's been wonderful to see the way people put their lives and emotions into it all. And I'm very proud of what she achieved.”

Foremost among those dedicated horsemen have been Fred Seitz and his team at Brookdale, who had some tough calls to make this week.

“The first one was a shock, for sure,” McGrath said. “But it's typical of the way they operate that they were all over it before anyone would normally be concerned. She just wasn't regular, and he was like, 'I don't like this, mares have super immunity when they're carrying, I want to send her get to looked at.' And where better could she have been than Rood and Riddle? And it did look like she was getting better, she was on fluids, she seemed to be stabilizing. But then it suddenly went the other way.”

Happily Vero Amore's propensity to throw fillies has allowed McGrath to keep all bar one of her other daughters–including 'TDN Rising Star' Mainstay (Astern), who finished runner-up in the GIII Schuylerville S. on her second start last year, and is closing on a return to the track. So perhaps there may yet be a legacy beyond whatever Vequist can do for Spendthrift.

“Her foal was a filly, so a full sister to Vequist, and that would have been something,” McGrath said. “After you take a punch you've got to get up off the canvas, dust yourself off, and walk back to the corner. But we're taking a moment out to remember her, for sure, because she was absolutely special. Sometimes when you pass the mile marker, you have to just stop, realize the beauty that's been around you, and count your blessings. That's what today is all about.”