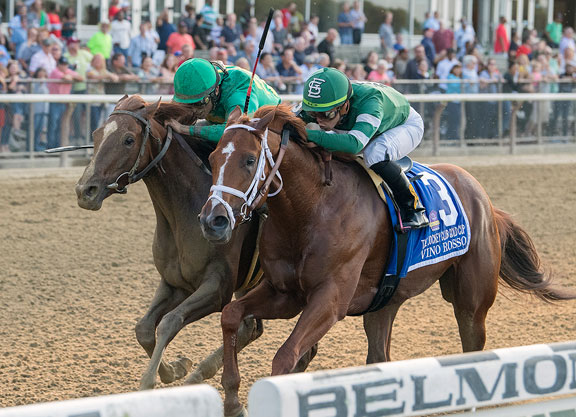 Code of Honor (outside) and Vino Rosso | Sarah Andrew

W.S. Farish’s Code of Honor (Noble Mission {GB}), put up via a controversial disqualification in Saturday’s GI Jockey Club Gold Cup at Belmont, came out of his victory in good order Sunday morning according to trainer Shug McGaughey.

“He came back fine,” said McGaughey, who picked up his fourth JCGC win, but first since 1993. “He looked good last night, and he looked good this morning. We’ll see as we go along.”

The presumed next start for Code of Honor would be in the GI Breeders’ Cup Classic Nov. 2 at Santa Anita, but McGaughey made no such commitments in the Gold Cup aftermath.

“I’ll see how he comes out of it and talk to Mr. Farish as the week goes along and we’ll make up our mind,” McGaughey said. “I’ll possibly give him some time and try and bring him back in the spring. Maybe the [GI] Carter at Aqueduct and the [GIII] Westchester here.”

McGaughey believes the Gold Cup score put Code of Honor atop a 3-year-old division that has seldom had a clear leader throughout the year.

“I would think so,” McGaughey said. “I was very confident going into the Travers. I was confident going into this race that he was going to run his race, but stepping up against some nice older horses you never know until you try. I was very pleased with the way he ran and to step it up against some accomplished older horses was a big accomplishment for Code of Honor.”

Meanwhile, Todd Pletcher, trainer of the demoted Vino Rosso (Curlin), said he was disappointed with the stewards’ decision.

“To me, it was a classic horse race from the top of the stretch to the finish line. Two horses hooked up and they brushed, but to me, no horse was ever knocked off stride and neither horse lost momentum because of it,” said Pletcher. “It was a piece of race riding; Irad drifted out a little bit, Johnny drifted in a little bit. I’ve watched a lot of races and I felt pretty comfortable watching the head on there would not be a disqualification and I was surprised when there was.”

Pletcher said, however, that there would be no appeal of the stewards’ decision coming from co-owners Repole Stable and St. Elias Stable.

“I don’t believe there will be an appeal. I spoke to both owners last night and they were sort of split,” said Pletcher. “They agreed they would not appeal but I plan to meet with the stewards today as well to get an explanation of what they saw. I didn’t feel like I saw the same thing, but seldom in these appeal situations does anything ever come out of it.”