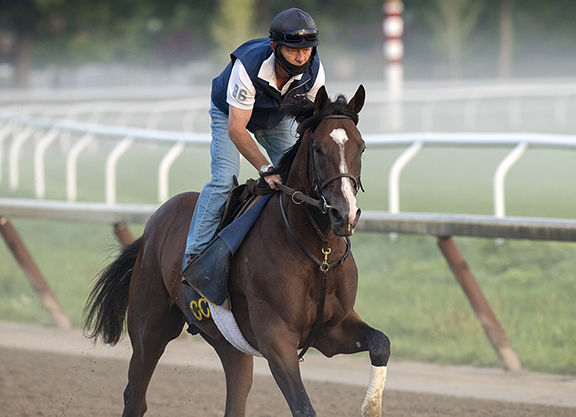 On fire trough the first half of the Saratoga meet, trainer Christophe Clement sends out a two-pronged attack in Saturday's Saratoga Derby Invitational S., presented as the first leg of this season's New York Turf Triple. Leading the Clement charge is West Point Thoroughbreds, William Freeman, William Sandbrook and Cheryl Manning's Decorated Invader (Declaration of War). Winner of last year's GI Summer S. at Woodbine and a troubled fourth in the GI Breeders' Cup Juvenile Turf at Santa Anita, the colt kicked off 2020 with

1 1/4-length score in the one-mile Cutler Bay in March at Gulfstream Park before besting Proven Strategies (Sky Mesa) in Belmont's GII Pennine Ridge S. June 20. Most recently, he faced nine furlongs for the first time and handled the task with aplomb, winning the July 18 GII Hall of Fame S. by 1 1/4 lengths.

“I'm very happy with how he's been training,” affirmed Clement. “He looks great. He's been training with [stablemate] Gufo and they continue to work well and help each other. They work very willingly, so I'm excited to see both of them run.”

Joel Rosario, aboard for his last three wins, gets the call while exiting post two.

Coming into the Saratoga Derby off a four-race win streak is Team Clement's other entrant, Otter Bend Stables' Gufo (Declaration of War). The flashy chestnut captured the

1 1/16-mile English Channel S. in May at Gulfstream before closing strongly to take the nine-furlong GIII Kent S. at Delaware July 4.

“The farther, the better for him,” said Clement. “He's a little different kind of horse. He always shows less speed in his races than Decorated Invader, but he has a really good turn-of-foot.”

Hall of Famer John Velazquez will ride Gufo for the first time.

Robert and Lawana Low's Colonel Liam (Liam's Map), a $1.2-million OBS juvenile graduate, ascended to the win following the disqualification of next-out scorer Per Capita (Tapit) in a one-mile dirt test at Gulfstream in April before finishing third in the slop at the Hallandale oval May 24. Given his chance while trying older rivals on the Saratoga turf July 22, he proved he was up to the task with a 2 3/4-length victory.

“I've been very pleased,” said trainer Todd Pletcher. “He was the only 3-year-old in that race. It was really competitive and he handled it well, so I was happy with that.”

Since that effort, the gray breezed five furlongs over Saratoga's Oklahoma turf course in a bullet 1:00.8 Aug. 8.

“I was also happy with the way he breezed back,” said Pletcher. “It seems like we found what we were looking for putting him on the turf.”

Breaking from post six, he will now pick up the services of Hall of Fame jockey Javier Castellano.

“He's always given me the impression that longer distances won't hurt him,” Pletcher opined. “The key is if he can settle as well as he did in the last race.”