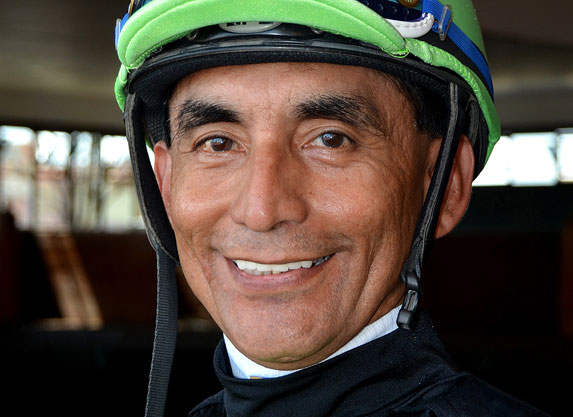 Four months after jockey Jose Flores was killed after falling head-first from his mount while on the lead in a race at Parx, just-released toxicology findings show that the horse he was riding subsequently tested “negative for the presence of foreign substances.”

In addition, a necropsy conducted by the Pennsylvania Animal Diagnostic Laboratory System at New Bolton Center has determined that Flores's mount, Love Rules (Not For Love), sustained a “catastrophic left humeral fracture” (an acute bone break between the shoulder and elbow joints). That in-race injury on Mar 19 is what triggered the three-horse spill from which Flores never recovered.

Flores, 56, the all-time leading money-earning jockey at Parx, suffered severe neurological trauma and did not regain consciousness after he hit the ground hard and was trampled by a trailing horse. At the request of his family, Flores was removed from life-support machinery at a Philadelphia hospital three days after the spill. Love Rules was euthanized on the track. The other horses and riders escaped serious injury.

These details–plus supporting findings that indicate Love Rules had no pre-existing veterinary red flags that would have precluded the 6-year-old horse from racing–have been gleaned from a 19-page Pennsylvania State Horse Racing Commission (PHRC) investigation that was completed July 16. TDN obtained a copy of it by filing a Right-to-Know Law request with the Pennsylvania Department of Agriculture.

The report neither absolves nor assigns blame to anyone. No sanctions to individuals or recommended changes to procedures at Parx are listed. The report contains narrative accounts from 29 persons, including other jockeys in the race, track officials, veterinary and ambulance responders, plus the trainer and stable employee who attended to Love Rules before and after the fatal spill. On page one of the document, the case is described as “approved/closed.” A detective from the Bensalem Police Department assigned to the case is quoted as saying he is writing up the incident “basically as an accident.”

Deborah Lamparter, the Parx-employed veterinarian who conducted the pre-race exam on Love Rules prior to the Mar. 19 race, told PHRC investigators that she recalled having conducted the same sort of pre-race check on Love Rules for a Jan. 9 race (four starts previously), and that the horse passed with no problems at that time. When she made the comparative check for the Mar. 19 race, she noted “Love Rules was clean-legged, legs were cold. There was no inflammation, and no pressure. The legs flexed normal.”

The investigator wrote that during that Mar 19 vet check, Lamparter recalled “a conversation with [stable employee Doug Gillis] in which they commented that the horse was really clean for a 6-year-old.”

Lamparter, according to the report, later watched the horses warm up prior to Race 9 and was stationed at the gate for the start, where she observed no adverse issues with Love Rules.

Harold Wyner, the trainer of Love Rules, described his horse to PHRC investigators as being “very clean-legged and having a good disposition.” The report notes that when Wyner claimed Love Rules for $25,000 on Sept. 14, 2017, “the new connections had the horse's teeth floated after the claim, and hocks injected in December.”

Love Rules compiled a 1-2-1 record from seven starts under Wyner's care prior to the fatal Mar. 19 start. According to the investigative report, Wyner customarily galloped Love Rules himself on a daily basis, and when the horse worked out and raced, Flores was usually aboard. Flores, Wyner added, had galloped Love Rules two days prior to his final race. The jockey had reported to the trainer that “the horse felt great, and he thought he had a chance to win.”

The necropsy section of the report noted that Love Rules had the appearance of “a robust Thoroughbred stallion [whose] postmortem condition is good.”