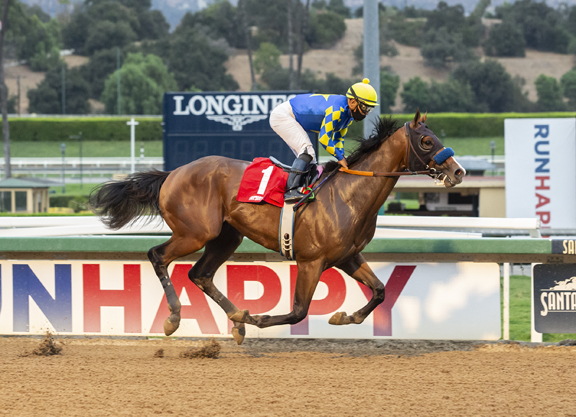 Having tuned up for this with a head-turning six-furlong work from the gate on Monday (6f, 1:12.40, 1/3, XBTV Video), the bay was let go at generous 7-2 odds as two foes with experience took more attention. Off a bit sluggishly from his rail draw, Classier quickly recovered to take command and zip away take a clear lead. He blew the race apart through a :45.68 half, and was never for catching as he continued on to the wire four lengths clear in a display of speed reminiscent of the connections' 2019 GI American Pharoah S. winner and 'Rising Star' Eight Rings (Empire Maker). Second timer Go On (Nyquist) completed the exacta.

Classier is out of a half-sister to the dam of French and U.S. GSW/MGISP Homerique (Exchange Rate). His third dam produced Group 1 winner White Moonstone (Dynaformer). Dam Class Will Tell, by one of the hottest broodmare sires on the planet in Bernardini, has a yearling colt by Tiznow who sold for just $12,000 at KEESEP and a foal filly by Union Rags. Her dam was bred back to More Than Ready for 2021. For coverage on Classier's sale at Keeneland, see SF, Starlight, Madaket Continue Building Their Empire.