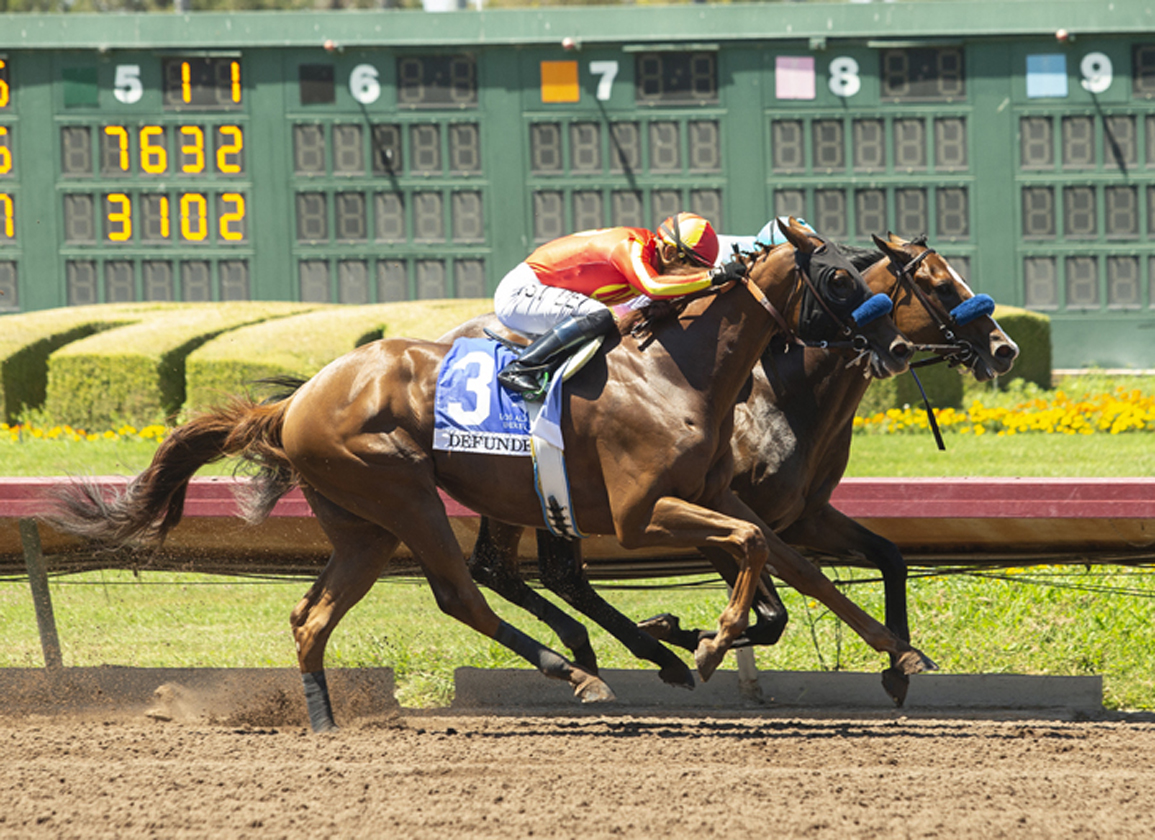 Classier (inside) holds off Defunded | Benoit

Classier went wire-to-wire and resolutely held off stablemate Defunded to give trainer Bob Baffert his fifth straight win in the GIII Los Alamitos Derby Sunday. Sent off at 6-5, Classier was on the lead through fractions of :22.98 and :47.01. Defunded, the 3-5 favorite, rolled up to challenge the pacesetter after three-quarters in 1:11.08 and, while Classier began inching away in upper stretch, the favorite battled back in a stirring stretch battle to the wire. Classier refused to yield and earned his first graded victory in determined fashion.

“I waited until the eighth pole to ask him and when he saw [Defunded] he really dug in,” winning rider Mike Smith said. “This is a big colt with a lot to him and he is going to get even better.”

Baffert added, “I really thought–and the rider [Abel Cedillo] thought–Defunded had him the whole way. It was pretty exciting and I was really hoping for a dead heat because I've always wanted one of those in a stakes so you don't have to make that other call.

Classier went wire-to-wire to win his 6 1/2-furlong debut at Santa Anita last October and was immediately thrown into the deep end where he finished a well-beaten eighth in the Nov. 6 GI Breeders' Cup Juvenile. After a stumbling start, he finished third behind The Chosen Vron (Vronsky) and Defunded while making his return to the races in the June 13 GIII Affirmed S. last time out.

Classier earned his start in Sunday's Los Al Derby with a half-mile work in :47 1/5 at Santa Anita last Thursday.

“I wasn't going to run [Classier] in this race,” Baffert admitted. “I talked to the ownership group and told them I was going to work him and if he worked well I'd run him. He worked very well, so we decided to go. We thought he'd be on the lead last time, but he stumbled leaving the gate and he really needed the race. He's going to improve off this. I can take my time with him now and figure out a spot because he is bred to be superstar.”

Breeder Mary Sullivan purchased Class Will Tell for $300,000 at the 2013 Keeneland September Yearling Sale. The mare, a half-sister to the dam of multiple Group 1 placed Homerique (Exchange Rate), has a yearling filly by Union Rags and produced a colt by More Than Ready this year.