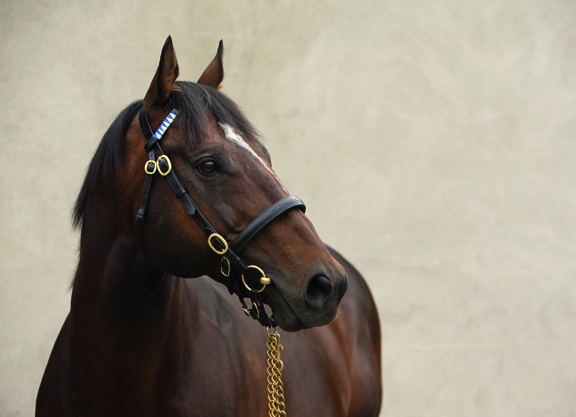 Dual French Classic winner and leading sire Shamardal (Giant’s Causeway–Helsinki {GB}, by Machiavellian) has been euthanised at the age of 18 after dealing with “a range of health issues.”

Announcing the news on Thursday, Joe Osborne, managing director of Godolphin Ireland, paid tribute to Kildangan Stud’s flagship stallion. “Shamardal embodied mental and physical toughness—as a racehorse and as a stallion,” he said. “As the racing world has seen over the past 15 years, he passed those qualities on to his progeny.

“He contended with a range of health issues over recent years and did so with fortitude and resilience. It’s a tough day for us saying goodbye to him. This is an appropriate time to thank our team of stallion personnel and support professionals who cared for him so well and so kindly throughout his time here at Kildangan Stud.”

Unbeaten on turf and found wanting only once in his seven-race career when contesting the G2 UAE Derby on dirt, the bold front-running Shamardal was bred in Kentucky by Brilliant Stable and was bought as a yearling by the late Sheikh Maktoum al Maktoum’s Gainsborough Stud Management. Racing initially for Abdulla Buhaleeba when trained by Mark Johnston, he burst onto the scene in his trainer’s home nation of Scotland, winning an Ayr maiden in emphatic fashion, leading from start to finish and passing the post eight lengths clear.

From Ayr, it was straight to Glorious Goodwood just over a fortnight later, where he beat subsequent GI Breeders’ Cup Juvenile winner Wilko (Awesome Again) by 2 1/2 lengths when landing the G2 Veuve Clicquot Vintage S. in the hands of Joe Fanning.

By the time Shamardal returned to the track in mid-October for a crack at the G1 Darley Dewhurst S., Kevin Darley was aboard to guide the colt, who now bore Sheikh Maktoum’s silks, to another commanding all-the-way victory.

The leading juvenile colt in Europe for 2004 and a Cartier Award winner, Shamardal moved from Johnston’s Yorkshire stable over the winter to join Saeed Bin Suroor’s team in Dubai. His one start at Nad Al Sheba, when fading to ninth in the UAE Derby, transpired to be the only time Shamardal’s colours would be lowered and ensured that he would return to Europe for his Classic year rather than being aimed at the Kentucky Derby.

With stablemate Dubawi (Ire) being prepared for the G1 2000 Guineas in Newmarket, Shamardal was dispatched to Longchamp where he swiftly made amends for his disappointing resumption with a narrow victory over Indestachel (Ire) in the G1 Poule d’Essai des Poulains. He had subsequent G1 Prix de l’Arc de Triomphe winner Hurricane Run (Ire) a neck behind him when annexing his second Classic at Chantilly in the G1 Prix du Jockey Club in the first year that the race was reduced in distance to 2100 metres.

Returning to a mile just nine days later for what would prove to be his final start, Shamardal again made all to emulate his sire Giant’s Causeway by winning the G1 St James’s Palace S. when Royal Ascot was held at York. Dubawi, by that time the winner of the Irish 2000 Guineas, had been scratched from the race for unsuitably fast ground.

Scheduled to meet Derby winner Motivator (GB) in a hotly anticipated clash for the G1 Coral-Eclipse S., Shamardal was found to be lame two days before the race and a chip in his fetlock brought about his swift retirement. Coming at a relatively early stage in the season, he was able to enter quarantine to stand his first season in the Southern Hemisphere at Darley’s Australian base.

“We were all very sad to hear of the passing of Shamardal,” said his former trainer Saeed Bin Suroor. “He was a champion 2-year-old and became one of Godolphin’s best horses, winning two Classics in France as well as the St James’s Palace S.

“He went on to establish himself as a top sire, producing exceptional horses throughout the world, and everyone is going to miss him. It is a sad day but I am sure that his progeny will continue his legacy both on the racecourse and in the breeding sheds.”

From the first crop of Giant’s Causeway, Shamardal was a terrific advertisement for the stallion prowess of the ‘Iron Horse’ and both father and son went on to forge stud careers every bit as impressive as their racing days. Shamardal’s successful dual career as both racehorse and sire had perhaps seemed unlikely in his early days. He had been bought in at $485,000 when offered as a foal at Keeneland then fetched only 50,000gns at Tattersalls’ Houghton Yearling Sale having reportedly been misdiagnosed as a ‘wobbler.’

That success also owes plenty to his dam side, however. His dam Helsinki, a winner and listed-placed in France, was a daughter of the Irish Oaks winner Helen Street (GB) (Troy {GB}) and a full-sister to Street Cry (Ire), who had won the G1 Dubai World Cup for Sheikh Mohammed in the year Shamardal was born. Helsinki was sold to Coolmore for $3.9-million the month after her son had won the Dewhurst and she went on to produce the G2 Beresford S. winner Geoffrey Chaucer (Montjeu {Ire}).

Shamardal’s shuttle career was brought to a premature halt in 2012 when injury prevented his return to the Hunter Valley, but he had been quick off the mark in both hemispheres. In Australia, his first-crop daughter Faint Perfume (Aus) won the G1 VRC Oaks and G1 Vinery Stud S., while G3 Solario S. winner Shakespearean (Ire) helped him on his way to leading first-season sire honours in Europe.

Since then, his stud career—at Kildangan throughout except in 2008 when he stood at Dalham Hall Stud in Newmarket—has been liberally sprinkled with sons and daughters of the highest calibre. While not a stakes winner at two, Lope De Vega (Ire) swiftly proved himself to be the most illustrious member of Shamardal’s first crop, emulating his father with his French Classic double before becoming a highly respected stallion in his own right.

Shamardal’s list of 25 Group 1 winners will surely be augmented posthumously and it was given a terrific boost last season with the addition of three unbeaten juvenile colts. Pinatubo (Ire), Godolphin’s homebred European champion 2-year-old, looms largest, and he was joined by the Andre Fabre-trained pair Earthlight (Ire) and Victor Ludorum (Ire), all of whom ran in the royal blue of Godolphin. It is particularly to his credit that he could come up with three such talented juveniles in one crop bearing in mind that in recent years he has been covering restricted books of mares so he was denied the numerical advantage given to some of his busier rivals.

Sam Bullard, Darley’s director of stallions, said, “Shamardal has been the mainstay of our Irish stallion roster for many years and will be sorely missed by the team at Kildangan. His record as a sire speaks for itself and we have enjoyed many great days on the racecourse courtesy of his sons and daughters. Led by the imperious Pinatubo, Shamardal’s juvenile crop of last year was truly outstanding, siring three unbeaten Group 1-winning juvenile colts, a feat never achieved before since the start of the pattern.”

The three top-class juveniles were not the only stars last season for Shamardal, as his son Blue Point (Ire), who bears close physical resemblance to him, lit up Royal Ascot with a Group 1 sprint double before retiring to stand alongside him at Kildangan.

Shamardal became famed for passing on his somewhat plain head but if that was unappealing to the aesthetes of the Thoroughbred world, he quickly proved, through deed and gene, that handsome is as handsome does. For, along with that noble, old-fashioned head came a propensity for toughness, mingled pleasingly regularly with a touch of brilliance. And that is how we will remember him.