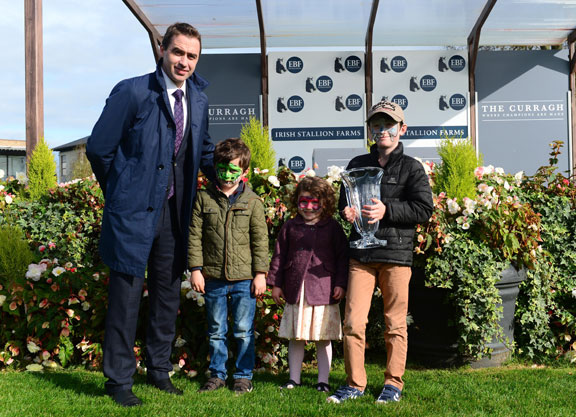 There are good reasons for smaller trainers, owners and breeders to do their equine shopping at the drafts of the major breeding operations at horses-in-training and breeding stock sales. If buying a filly or young broodmare there is the potential for updates from well-managed families, members of which likely remain in their breeders’ broodmare bands. For the colts and geldings there is always the hope that a slower-maturing individual may well just have been deemed surplus to requirements and can go on to be a star in another stable over time. There are umpteen examples of this—the £2,800 purchase Sceptical (GB) (Exceed And Excel {Aus}) being just one who has made headlines since being bought from Godolphin and continuing his career for James McAuley and trainer Denis Hogan.

Juddmonte, Shadwell and Godolphin routinely have large drafts catalogued for formal sales as well as conducting private transactions for certain individuals and, while a number of Ballydoyle trainees will be offered at the Tattersalls Horses-in-Training Sale each autumn, many more will be sold privately throughout the season.

It is not uncommon for there to be multiple runners from Ballydoyle in some of the top races in Europe. The best fillies naturally eventually retire to the Coolmore broodmare band, but only a handful of the very best colts will secure a berth in the stallion yard. Those below that level, however, can present some decent opportunities for other connections, as the recent G2 Derby Italiano victory of Tuscan Gaze (Ire) (Galileo {Ire}) highlighted.

The colt, who was bred by Coolmore in partnership with Lady Bamford’s Daylesford Stud, was previously unbeaten in two starts for John Gosden and was bought by jockey-turned-bloodstock agent Freddy Tylicki for Italian-based Mag Horse Racing SRL just weeks before his Classic success.

Jamie Moriarty of Coolmore’s racing office is in regular contact with agents and trainers on the lookout for such prospects. He says, “Some may be of the opinion that we wouldn’t be overjoyed at selling winners like that but in fact nothing could be further from the truth. Results like this bolster the relationships we are continually seeking to develop and maintain, and of course there’s also the pedigree update for the horse’s dam and relatives at home. So all in all, we couldn’t be happier for everyone concerned.”

He adds, “Tuscan Gaze’s recent success in the Italian Derby has received some great coverage, and rightly so. I suppose it could be perceived as something of a fairytale, and for none more so than Freddy Tylicki, but in reality we would like to think that this fairytale is played out with increasing regularity.”

There has long been a flow of horses from Ballydoyle to the Australian stable of leading owners Lloyd and Nick Williams, whose thirst to win the Melbourne Cup appears to be unquenchable. Rekindling (GB) (High Chaparral {Ire}) provided the father and son with their sixth victory in the Cup and was a memorable first for Joseph O’Brien, whose stable he has recently rejoined after a stint in Australia under the care of Liam Howley, who now trains the G2 Herbert Power S. winner Yucatan (Ire) (Galileo {Ire}). Last year’s eye-catching third-place finisher Il Paradiso (Galileo {Ire}), who was just a neck behind the winner Vow And Declare (Aus) (Declaration Of War), has remained in Australia and has joined Chris Waller’s stable after being sold to a syndicate which includes Ozzie Kheir. Among the other Ballydoyle graduates now in Australia are Galileo’s sons Southern France (Ire), who won the G2 Zipping Classic for Ciaron Maher and David Eustace, and G1 Caulfied S. winner Cape Of Good Hope (Ire), who is now trained by David and Ben Hayes and Tom Dabernig.

“Many will remember Rekindling and Johannes Vermeer going head-to-head in the Melbourne Cup, two Coolmore horses that had been sold to Australians Lloyd and Nick Williams,” says Moriarty. “The Melbourne Cup provides one of the best examples through the likes of Rekindling, Johannes Vermeer and Il Paradiso, a horse I suspect will be very much in the reckoning again this year.”

He adds, “As we retire only two or three new stallions each year to Coolmore, there are plenty of horses for sale and this presents terrific opportunities for clients old and new to get involved.

“Our team here takes calls and enquiries every day from the most far-reaching countries about prospective sales of racehorses and breeding stock alike. If clients have races they would like to target, be it on turf or dirt, Northern or Southern Hemisphere we will have plenty of options for them. Freddy had a week to find an Italian Derby winner and we were able to work it out.”

A little closer to home, the one-time Derby fancy Amedeo Modigliani (Ire) (Galileo {Ire}) is now in the stable of Spain’s champion trainer Guillermo Arizkorreta and has won his only start in Spain’s premier mile race, the Gran Premio Claudio Carudel.

“If you look at any of the bigger races across the globe, you will note Coolmore graduates amongst the rolls of honour,” says Moriarty. “Master of Hounds, Mikhail Glinka (GB), Stagelight (Ire) and Viscount Nelson went on to score at the highest levels in Dubai. Joshua Tree (Ire), Ballingarry (Ire), Frost Giant, Tannery (Ire), Heatseeker (Ire) and Brahms were all at the top of their game on the other side of the Atlantic. So whether it’s a Canadian International, a Singapore, Hollywood, Hong Kong or Italian Derby winner you’re looking for, we have been lucky enough to have them through our hands. Not to mention of course the Cheltenham and Grade 1 winners over jumps.”

Ah, yes. For an outfit so focused on winning Europe’s top middle-distance races, there will be plenty among them with sufficient stamina to excel in the National Hunt division, such as G1 JCB Triumph Hurdle winner Ivanovich Gorbatov (Ire) (Montjeu {Ire}).

“As the primary focus of Ballydoyle each year is to retire the next Sadler’s Wells or Galileo we would rarely have a gelding in training there, although in plenty of instances there will be improvement to come from these animals when they are gelded,” says Moriarty. “We don’t strictly sell colts only. The broodmare band takes continual management and, like the racehorse string, we can’t keep them all. There are a number of fillies that are offered privately each year. In cases where we have the dam and maybe a sister or two at home we would offer some for sale. This is where some of the best opportunities lie.”

One recent fortunate beneficiary of this is the new owner of Peach Tree (Ire) (Galileo {Ire}), who was already a Group 3 winner in her own right when sold less than 12 months ago. Since then, her full-sister Love (Ire) has announced herself as arguably the best 3-year-old filly in training.

Another daughter of Galileo was a similarly good purchase for Australian breeder Bob Scarborough, whose purchase of Cabaret (Ire) and her subsequent mating with Invincible Spirit (Ire) resulted in him breeding the 2000 Guineas winner Magna Grecia (Ire), who was bought by MV Magnier for 340,000gns.

Moriarty adds, “We have since gone back to buy a couple of her progeny, including Magna Grecia and the very promising St Mark’s Basilica who looked a smart sort on his debut last week.”