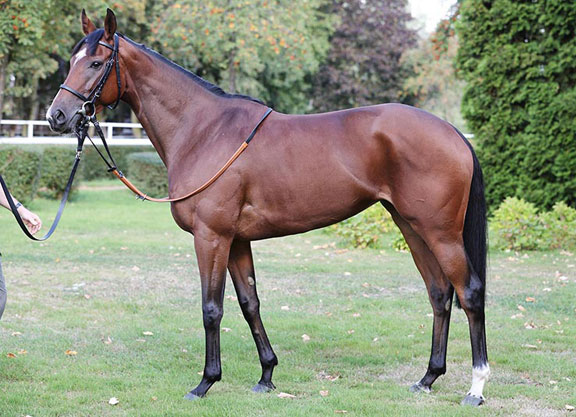 Arqana staged its annual boutique Arc Sale of horses in training at Saint-Cloud Racecourse on Saturday evening following a day's racing at ParisLongchamp, and it was a current star of the German turf that proved the breakout horse, with Virginia Joy (Ger) (Soldier Hollow {GB}) (lot 24) selling to Michel Zerolo's Oceanic Bloodstock for €975,000. Having raced thus far as a homebred for Gestut Auenquelle, Virginia Joy won the July 12 G3 Mehl-Mulhens-Trophy by a head before finishing third, beaten three-quarters of a length, in the G1 Preis Der Diana on Aug. 2. She was runner-up when last seen in the G2 T von Zastrow Stutenpreis on Sept. 12.

Coeursamba (Fr) (The Wow Signal {Ire}) (lot 13) is declared for Sunday's G1 Prix Marcel Boussac, and should she line up at ParisLongchamp she will be racing for new connections, having been bought by Haras du Saubous for €400,000 on Saturday evening. Trained by Jean-Claude Rouget, Coeursamba broke her maiden at second asking on June 30 and has since been third in the G3 Prix Six Perfections and the G3 Prix d'Aumale.

Emmanuel de Seroux of Narvick International stepped up to sign for four of the 11 lots sold on the evening, and the dearest of those was the 3-year-old colt Step By Step (Fr) (Sidestep {Aus}) (lot 25) for €320,000. Step By Step took the Listed Derby du Languedoc on June 12 before finishing second in the 3000 metre G3 Prix de Lutece on Sept. 3 for trainer Yann Barberot. Barberot was also the seller of the 3-year-old gelding Dick Whittington (Fr) (War Command) (lot 12), and that listed-placed runner was also bought by Narvick for €270,000.