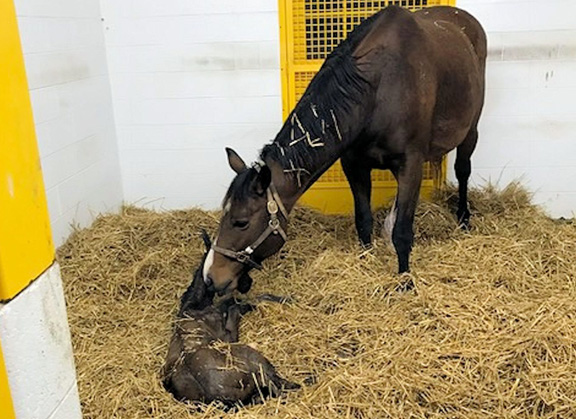 After being forced to postpone all farm tours at the historic Claiborne Farm, the top Bluegrass attraction and Thoroughbred fan destination announced that they would be conducting a live virtual stallion tour through Instagram beginning Tuesday, Mar. 17.

The idea was a huge success, with over 200 fans tuning in live on Instagram and thousands more watching the recording later on Instagram, Facebook, and YouTube. The recording has already received 12,000 views and 300 shares on Facebook. (Watch the video of the tour below).

“It's normally a really busy time for us the time of year not only in the foaling barn and breeding shed, but also with tours,” said Claiborne president Walker Hancock. “With so many people having to cancel their tours, we felt bad and wanted to brighten some people's day. We know that a lot of people are stuck at home with their spirits down a bit, so we thought this might be able to cheer people up.”

Stallion groom Kevin Lay kicked off the virtual tour in the Claiborne gift shop. “Welcome to Claiborne Farm. I hope you that we find you well and healthy. We wish that we could be doing this in person, but we are going to do our best to bring the farm to you.”

The tour went into the history of the farm, mentioning when Bold Ruler and Round Table, eventual Horse of the Year recipients in 1957 and 1958 respectively, were born on the same night at Claiborne.

The tour made stops at the breeding shed and the main barns, as well as the paddocks of multiple stallions including Algorithms, Mastery, War Front, Catholic Boy, and Runhappy, where treats were distributed to all. It also stopped by the stallion cemetery, visiting the burial sites of the likes of Swale, Riva Ridge, and Secretariat. The tour concluded with a visit with “the infamous” teaser Don Julio.

Fans were able to ask questions in real time. Question topics ranged from stallion's exercise and grooming regiments to the purchase price and stud fees of the stallions.
The video garnered hundreds of comments, with fans expressing their gratitude, along with their excitement to be a part of the unique opportunity. One viewer wrote on Facebook, “This video was bright spot in this gloomy time,” and another wrote, “I was so excited, I even set an alarm so I could watch live.”

“I logged on to Instagram to see people's reactions and everyone seemed so appreciative and thankful,” Hancock said. “People were recalling memories of when they had visited in the past, and others were saying how they hoped to visit soon. It was really cool to see people come together and share some good times during some dreaded times.”

Claiborne plans on holding virtual tours of the foaling barn, the nursery, the aftercare facility, as well a tour of Marchmont cemetery, the burial site of Claiborne's famous broodmares.

Hancock said, “We look forward to doing more in the coming weeks and hope to have another great reception like we had this past Tuesday.