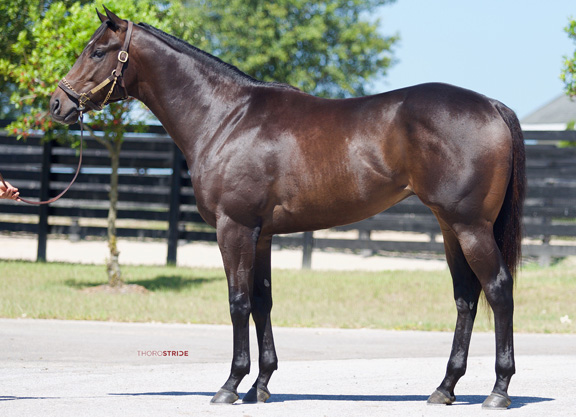 A filly by City Zip turned in the fastest furlong breeze and a colt by Daredevil had the fastest quarter-mile work during Wednesday’s first under-tack preview session ahead of next week’s Ocala Breeders’ Sales Company’s June Sale of 2-Year-Olds in Training. Consignor Mark White sent out hip 199 to earn the bullet furlong time of :9 4/5. The filly by City Zip is out of Court Appeal (Candy Ride {Arg}), a half-sister to Grade I winner Mani Bhavan (Storm Boot), graded winner Hear the Ghost (Ghostzapper) and stakes-winning and Grade I-placed Closing Bell (Tapit). She was a $7,000 Keeneland September acquisition.

“We were delighted with the work,” said White, who is consigning the filly on behalf of North Carolina-based client J D Osgood. “I knew she was fast, but I didn’t know she was that fast. I thought she would go in :10 or :10 1/5 and the track was getting a little slow when she went up there, with the heat out here. So I was absolutely delighted with her.”

White said of the filly, “She is not overly big, but she’s like a Quarter Horse. She’s as wide as she is tall. She has a butt on her that is the width of the shedrow and she is built for speed.”

White has had the filly since December and he has been impressed by her development.

“We were thinking of taking her to the April sale, but I didn’t get her until December and she was a little immature,” he said. “I have another filly for the same guy, so we decided rather than pushing them, we’d take our time and get her to June. As fast as she is, she could have gone to April or June, but the extra five weeks has done her the world of good.”

White, who was longtime farm manager for Another Episode Farm, is consigning only two horses to auction this year. He also sent out a filly by Hard Spun (hip 74) to work a quarter in :21 2/5 Wednesday at OBS.

“I was a farm manager for Another Episode Farm for 12 years and then Johanne Everard sold the farm, so I kept a few clients and went out on my own,” White explained. “I’m not a big, big guy, I just have six or seven horses every year. These are the only two I’m selling this year, the rest all go to the racetrack.”

A colt from the first crop of Grade I winner Daredevil (More Than Ready) (hip 100) turned in Wednesday’s fastest quarter-mile work of :20 3/5. Consigned by Wavertree Stables, the dark bay juvenile is out of Bible (U S Ranger) and from the family of Corinthian. He was purchased for $72,000 at last year’s Fasig-Tipton July sale by Ciaran Dunne’s Redwings pinhooking partnership and had originally been targeted at the OBS April sale. Click for ThoroStride video inspection.

“He is a nice horse, he’s always been a nice horse,” Dunne said. “We had huge expectations going into April with him. He had a little curb right before his final work, so he made the decision for us that we had to wait for here. We pinfired the curb and gave him some time. He’s had two breezes since, both of which have been out of this world, so we weren’t surprised by this work.”

Wavertree has had success offering offspring by first-crop sires this spring, notably selling a $1.2-million son of Liam’s Map at the OBS April sale.

“We have always tended to play in that market,” Dunne explained. “Usually, they are the ones that they’ll let you buy. The proven stallions go to the end-users and we need to take chances on horses that are unproven. We just stick with the physical that works for us.”

The under-tack preview show continues through Sunday with sessions beginning daily at 7:30 a.m. The sale will be held next Wednesday through Friday. Bidding begins each day at 10 a.m.