City of Light Ready to Shine in Saratoga with First Yearlings 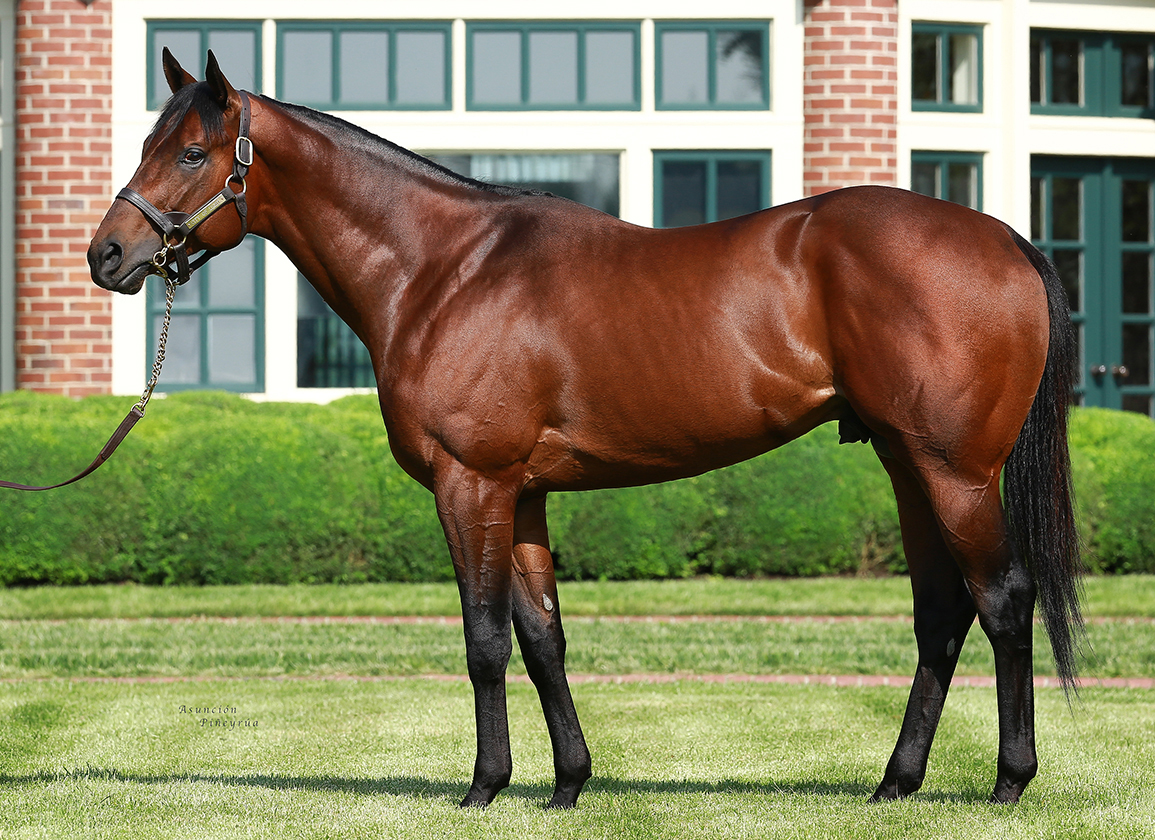 In 2015, the son of Quality Road bred by Ann Marie Farm topped the sixth session of the Keeneland September Sale by a landslide when he sold for $710,000 to Mark Reid of Walnut Green. It was the largest ticket price for a Keeneland Book 3 horse since 2007.

Allaire Ryan recalls watching City of Light develop at Lane's End Farm in the days leading up to his purchase.

“Physically, by the time the sale came around, he was a stunning individual,” she said. “He started out with a big, rangy, raw frame and truly blossomed as he came into himself over the course of sales prep. By the time Book 3 rolled around, he was in prime placement to be received by end users and pinhookers. Anybody that looked at him, he was a horse that stayed on your short list.”

A similar thought was had by breeders a few years later when he first began his stud career at Lane's End in 2019. The Breeders' Cup champion and multi-millionaire filled a 146-mare book in his first year off a $35,000 stud fee. When his fee was increased to $40,000 the following season, he bred the same number of mares.

“He's been overwhelmingly supported at stud,” Ryan said of the young stallion who was just as popular this year holding a $40,000 stud fee. “As far as getting off to a good start, we couldn't be happier with how he's done thus far.”

And just as City of Light blossomed during sales prep as a yearling, Ryan said the eye-catching bay has bettered himself physically as he's let down as a stallion.

Campaigned by Mr. and Mrs. William K. Warren Jr., City of Light captured the GI Malibu S. as a sophomore in his first start against stakes company. The Michael McCarthy pupil returned at four to annex consecutive wins in the GI Triple Bend S. and GII Oaklawn H. After placing in two Grade I competitions in his next starts, he took the 2018 GI Breeders' Cup Dirt Mile and then capped off his career the following January with a 5 3/4-length victory over a sloppy track in the GI Pegasus World Cup Invitational S.

“The fact that he's a Grade I winner at three, four and five is pretty remarkable,” Ryan said. “He was just a classy individual from the get-go. He had the drive, determination and class factor to rise above the competition.”

City of Light's first crop of weanlings were well received last year with 20 of 23 sold to average $190, 875 and place their sire at the top of the first-crop stallion ranks behind only Triple Crown winner Justify in terms of weanling average.

His top lot, a colt out of the Into Mischief mare Breaking Beauty, was the highest-priced weanling of the Fasig-Tipton November Sale when he was purchased by Oxo Equine LLC for $600,000. Larry Best's Oxo Equine purchased another top-priced member of City of Light's first crop at the Keeneland January Sale, going to $400,000 for a filly out of I'll Show Me (Bernardini) from the family of champion Proud Spell (Proud Citizen).

“In last year's market there were a lot uncertainties, but we were certainly encouraged by the support buyers showed for his first-sale yearlings,” Ryan said. “Consistent support from end users and pinhookers is always encouraging, especially for a new stallion, so to receive that kind of support certainly made us feel like we were heading into the right direction coming into the yearling sales season.” 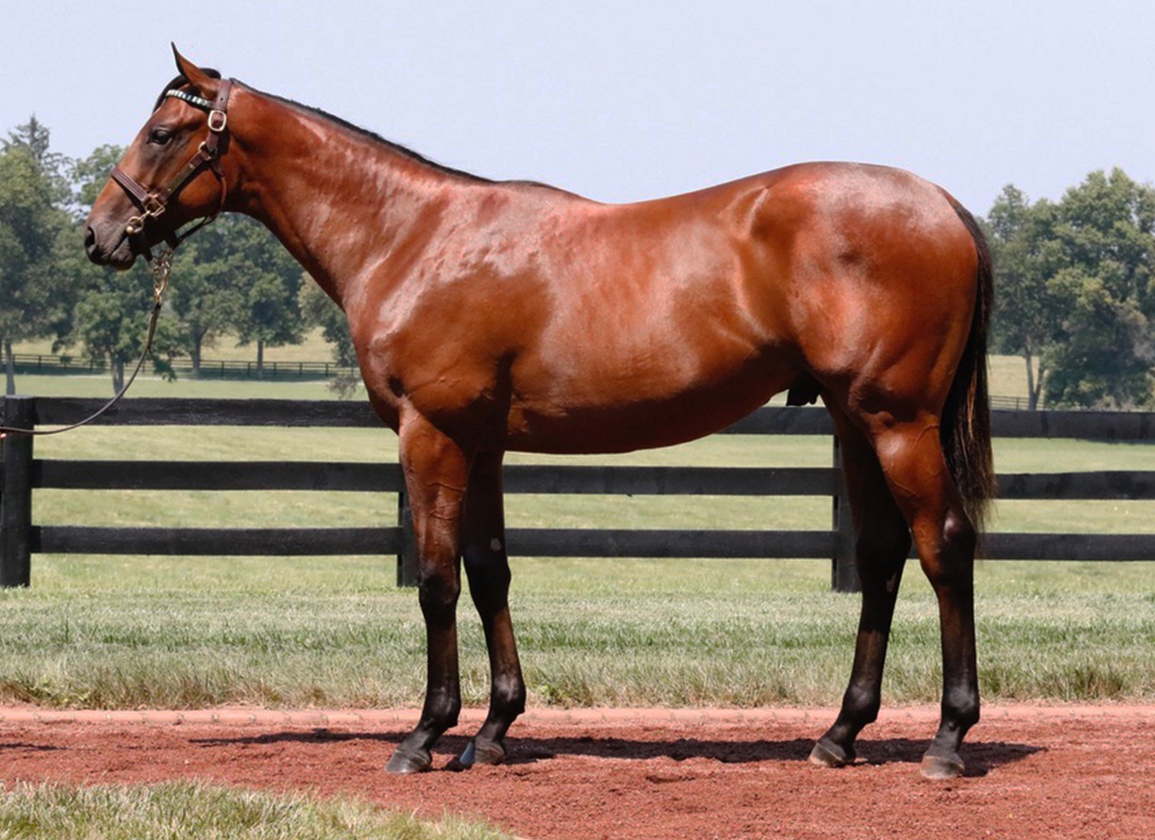 Ryan said the physicals City of Light is throwing lend to the yearlings' commercial appeal in the sales ring.

“City of Light is a very dominant stallion from a physical standpoint,” she said. “He's extremely consistent in what he's throwing. Like him, they have size and beautifully-balanced frames. They have scope and a bit of style and elegance to them. A City of Light yearling comes out and they have presence. They catch your eye. On top of that, they use themselves beautifully. They have a tremendous range of motion and they cover the ground effortlessly with their stride. So from a commercial aspect, they have everything you want in a yearling prospect.”

The young sire has seven first-crop yearlings cataloged for the upcoming Fasig-Tipton Saratoga Select Sale on Aug.  9 and 10. Lane's End will be representing two of those youngsters.

The first, a colt selling as Hip 33, is a son of dual stakes winner Adorable Miss (Kitten's Joy), a full-sister to GIIISW Noble Beauty.

“He's a homebred here for the farm and has been a forward individual from day one,” Ryan explained. “He's got size, length, scope and a quality frame. He has a handsome head and eye, beautiful length to his neck and a nice range of motion. He carries himself effortlessly for a big, two-turn sort of colt.”

The second Lane's End-consigned City of Light, a filly selling as Hip 154, is out of the A.P. Indy mare Modesty Blaise, a daughter of Group I winner and Grade I producer Chimes of Freedom (Private Account). The filly is a half-sister to stakes winners High Noon Rider (Distorted Humor) and Poupee Flash (Elusive Quality).

“This filly oozes class and quality,” Ryan noted. “She has the residual value in her female family to back her up so I think heading into the sale, she'll be very well-received.” 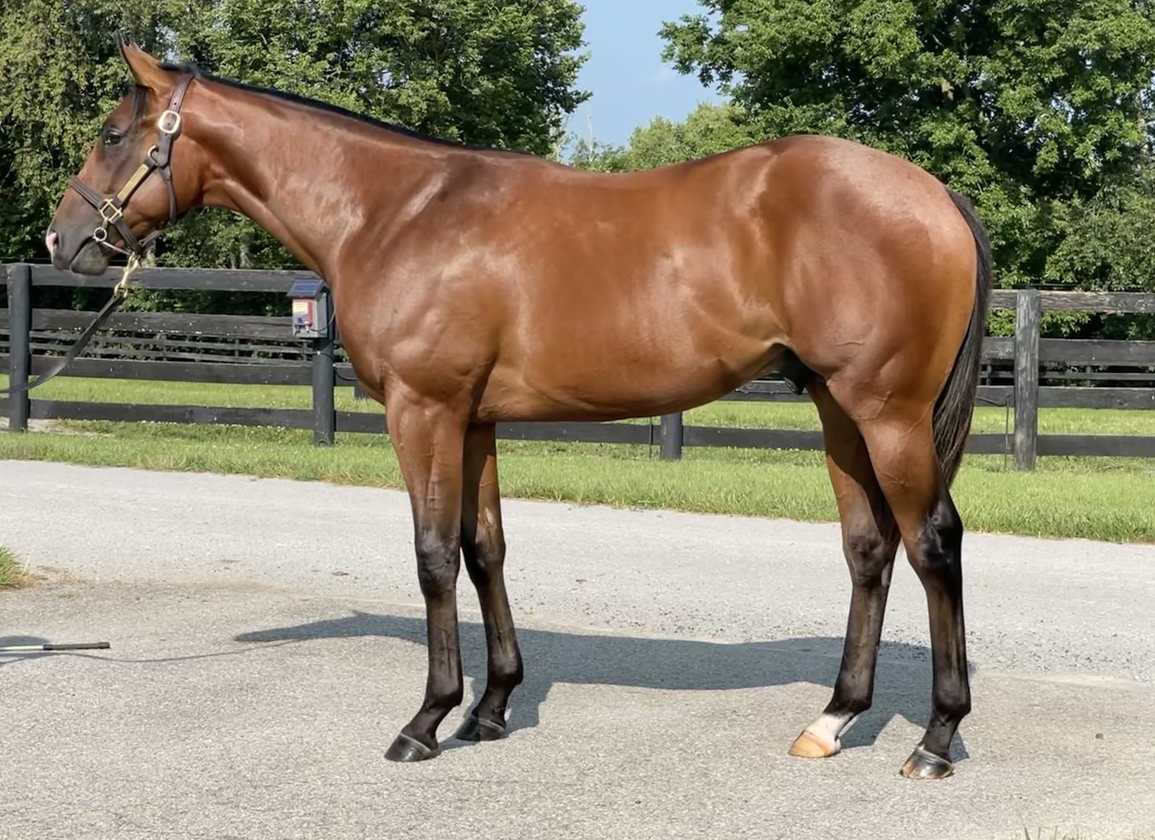 Chris Welker has been on the ride of a lifetime over the past year as the co-breeder of dual graded stakes winner Travel Column (Frosted). The filly's half-brother by American Pharoah, now named Corton Charlemagne, brought $1.25 million at the 2020 Fasig-Tipton Selected Yearlings Showcase. This year, Welker is looking forward to offering their half-brother by City of Light as Hip 209 at the upcoming Fasig-Tipton Saratoga Sale.

“What don't I like about him?” Welker asked about the colt that will be consigned with Denali Stud. “As he's gotten older, he reminds me a lot of City of Light. This colt has a very good mind, a beautiful walk and he's very smooth. He has a beautiful head on him and is everything I had hoped he would be.”

Regarding the decision to send Swingit to City of Light, Welker said, “We loved the way he was bred and the races he won were brilliant. He was a brilliant horse. The first time we saw him run, I got really excited about how beautiful he was. At that time Swingit wasn't what she is now so the timing was perfect that when he went to stud, her offspring had done what they've done and we were able to [breed to him].

With just one week until her colt is set to go through the ring in Saratoga, Welker is growing more and more excited to find out how he will be received by the market.

City of Light's other yearlings at the upcoming Fasig-Tipton Saratoga Select Sale include a half-brother to GISP Mr. Crow (Tapizar), a half-brother to GIISW Merneith (American Pharoah) out of SW Flattermewithroses (Flatter), a half-sister to GIIISW Share the Ride (Candy Ride {Arg}) out of three-time stakes winner Belle of the Hall (Graeme Hall), as well as a son of stakes-placed Sca Doodle (Scat Daddy).