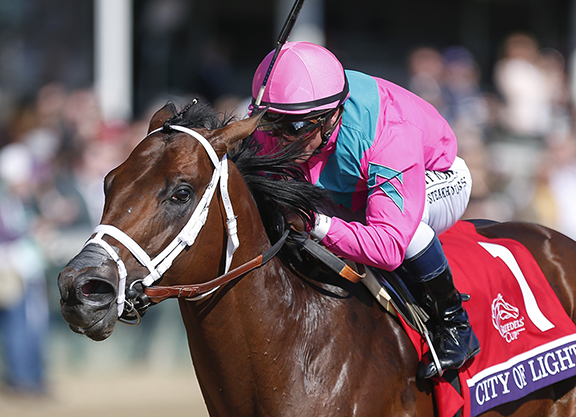 City of Light (Quality Road) left the stalls running and never gave anybody else a chance posting a dominating performance, his third at the highest level, in the GI Breeders' Cup Dirt Mile. It was 2 3/4 lengths back to Seeking the Soul (Perfect Soul {Ire}) in second. Bravazo (Awesome Again) was third.

Previously unbeaten Catalina Cruiser (Union Rags), off to an awkward beginning after veering out at the start from his nine draw, was a very disappointing sixth as the 4-5 favorite.

“It feels great,” Michael McCarthy, a former assistant to trainer Todd Pletcher, said after saddling his first Breeders' Cup winner. “I've been part of a lot of these with Todd Pletcher, so it's great to have one of my own. It means a lot to me. We loved the post, Javier [Castellano] rode a great race and it was no secret that we were going to run away from there. At the three-eighths, I knew it was over.”

Hustled to the front by Castellano from his rail draw, City of Light was on the engine through sharp early fractions of :22.64 and :45.16. Challengers began to line up at the top of the stretch, but the 5-2 shot had plenty left in the tank, drawing off down the lane to win for fun.

“I let him break out of the gate a little bit with speed,” Castellano said. “He set the pace, and it worked out great for me today. He's a very special horse the way he did it today.”

Horse of the Year Saint Liam carried these same fuchsia colors of the Warrens to a popular win in the 2005 GI Breeders' Cup Classic at Belmont Park.

“We have so much fun with him,” winning owner William K. Warren Jr. said. “He's like part of the family. We go to the barn early in the morning and my wife just loves to tease him.”

Warren continued, “I would have to say I'm never calm in these races because it's so exciting to the Warren family. And I'm so proud that my two sons and wife are owners of City of Light with me. That makes it so special. I'm just so proud of our horse.”

City of Light, winner of last December's GI Malibu S., followed up with a tally in the GI Triple Bend S. Mar. 10. He successfully stretched to 1 1/8 miles with a game neck tally over Accelerate (Lookin At Lucky) in the GII Oaklawn H. Apr. 14. Third as the favorite in the GI Gold Cup at Santa Anita May 26, he entered the Breeders' Cup off a runner-up finish with a wide trip in Saratoga's GI Forego S. Aug. 25.

Warren added that the GI Cigar Mile at Aqueduct may be next for City of Light.

City of Light, slated to join the Lane's End stallion roster upon retirement next year, becomes the third Breeders' Cup winner for leading young sire Quality Road off the heels of Caledonia Road (2017 Juvenile Fillies) and Hootenanny (2014 Juvenile Turf). City of Light, a $710,000 KEESEP yearling and the most expensive of his sire's yearlings to sell in 2015, is bred on a similar cross to MGISW Abel Tasman (Quality Road). City of Light is the final foal out of unraced Paris Notion, who was picked up for $52,000 by Ann Marie Farm as a Fasig-Tipton Summer yearling in 1999 and is a half-sister to 1997 GI Test S. heroine Fabulously Fast (Deputy Minister). Second dam Fabulous Notion won the GI Santa Susana S. and is a half to GISW Cacoethes (Alydar). Deeper in the female family reside champion Fiji (GB) (Rainbow Quest) and MGISW Subordination (Mt. Livermore).