Churchill Filly Leads The Way At The SGA Yearling Sale 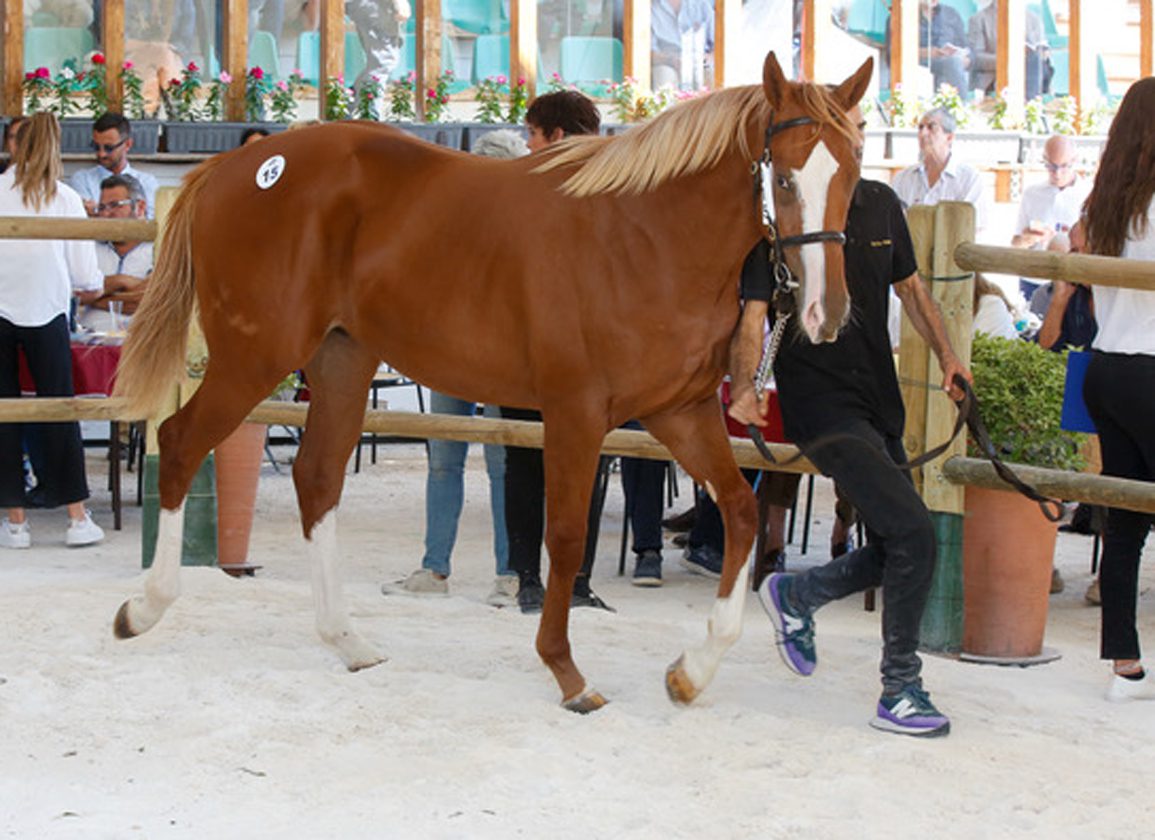 A Zoffany colt, who was the second highest lot on the day | Giulia Filippini/SGA

A filly by Churchill (Ire) out of the dual listed-placed Rabiosa Fiore (GB) (Sakhee's Secret {GB}) emerged as the €200,000 top lot during Saturday's SGA Yearling Sale in Milan. Consigned by Razza Vedano, the Mar. 6 foal (lot 28), named Rinnovati (Ity), is a half-sister to the two-time stakes winner Amalaura (Ire) (Raven's Pass). Another half-sister, the Saxon Warrior (Jpn) filly Rage Of Bamby (Ire) graduated at Leicester on Sept. 6. Marco Bozzi was in action for the relative of French Classic heroine East Of The Moon (Private Account).

Bozzi also struck for seven other lots on Saturday, shelling out €90,000 for another Vedano draftee in lot 25, a son of Sea The Stars (Ire) out of Listed Premio Terme di Merano heroine Orange Sun (GB) (Duke Of Marmalade {Ire}). That sire had topped the 2021 edition of the sale with a €120,000 colt. Originally a 30,000gns Tatteralls December foal, the colt is a half-brother to a pair of winners. Third dam Field Of Hope (Ire) (Selkirk)'s best day in the sun was a victory in the 1999 G1 Prix de la Foret.

Also from Vedano was lot 15, the Zoffany (Ire) colt Interstellar (Ity), out of the Group 3-placed Irene Watts (GB) (Miswaki Tern), who hammered for €100,000 to Micchiche' Gaetano. He is a half-brother to Il Grande Gatsby (Ire) (Churchill {Ire}), who has won at the listed level in Italy and ran third in the G3 Premio Parioli.

Another Coolmore sire was in the limelight shortly thereafter, as lot 12, a Le.Gi.-consigned filly by Wootton Bassett (GB) named Snow Roses (Ity) caught the eye of Powerstown Stud at €70,000. She had passed through the Arqana December ring for €85,000 as a foal. Her dam was twice stakes-placed, and is a half-sister to group winners Voice Of Love (Ire) (Poet's Voice {GB}) and Time Chant (GB) (War Chant).

Le.Gi. was also the consignor on record for lot 32, a Gleneagles (Ire) filly, who made €76,000 on the bid of Immobiliare Casa Paola. She had been a €30,000 Goffs November buyback last year. The daughter of Sopran Enery (Ire) (Montjeu {Ire}) is a half-sister to the G2 Premio Oaks d'Italia winner Auyantepui (GB) (Night Of Thunder {Ire}), while under the G3 Italian 1000 Guineas-winning second dam Sopran Londa (Ire) (Danehill) is the G1 Italian Derby hero Cima De Triomphe (Ire) (Galileo {Ire}) among others.