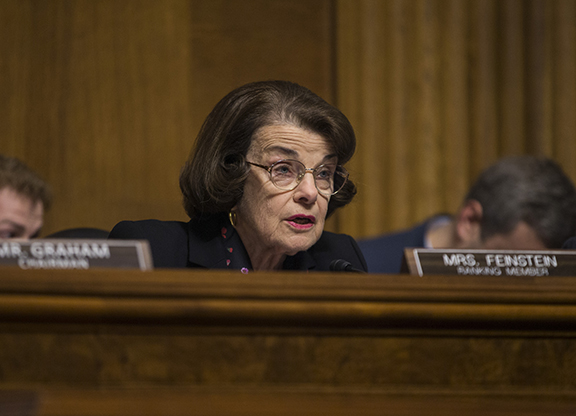 California Horse Racing Board (CHRB) chairman Chuck Winner said that he had a conversation with California Senator Dianne Feinstein's chief of staff Wednesday, and that he is planning to meet with the senator or a member of her senior staff. This, after the senator called for racing to be suspended at Santa Anita until an investigation into the 23 horses that have died at the track since late December has been completed.

“I believe that racing at Santa Anita should be suspended until the cause or causes of these deaths can be fully investigated,” wrote Feinstein, in Tuesday's letter to the CHRB. “I also ask for more information about what the California Horse Racing Board is doing to both investigate this matter and address some of the concerns that these incidents have rightly raised.”

As to when the meeting might take place, Winner said, “the ball is in their court.” Winner described the conversation as positive and collegial. “They understand that what I've said publicly is a fact, that we don't have the authority to suspend racing. I reiterated that, and they understood it, and appreciated that. They know that I've called a meeting [April] 12, at which time we'll be discussing all the various options that we have.”

On Tuesday, the CHRB announced a special meeting on Friday, Apr. 12 to discuss a possible relocation of race dates granted to Santa Anita. According to Winner, “there's no planned action for that meeting. That will be determined at the meeting.”

The Stronach Group COO Tim Ritvo told the TDN that racing was “running” as scheduled this weekend, beginning Thursday. The weekend's card contains the $1 million GI Santa Anita Derby and the G1 Santa Anita “Big Cap” H.; the latter was to be run in March, but was rescheduled due to a hiatus of racing of nearly a month at the facility while investigations into the track surface were conducted.

The resumption of racing last weekend at Santa Anita was marred Sunday by the fatal injury sustained by the Peter Miller-trained Arms Runner.

About the upcoming four days of racing at Santa Anita, Winner said “we all are hopeful of course that everything goes well, and we have a great weekend.”

Announcement of the rescheduled CHRB meeting sent the rumor mill into over-drive. New York Times reporter Joe Drape tweeted that Santa Anita is “asking the California Horse Racing Board to allow its remaining dates” to be transferred to Golden Gate Fields, another Stronach Group owned facility in Northern California.

In an email, Ritvo called this a “totally false story,” and added that Santa Anita has not been in talks with any other parties about possibly transferring its remaining winter/spring meet race-dates elsewhere.

Jack Liebau, vice president of the Los Alamitos Racing Association, confirmed that Los Alamitos has not submitted an application to receive dates from Santa Anita.

CHRB executive director Rick Baedeker previously explained to the TDN that the board has the authority to transfer race dates from one track to another track if it receives approval from both participating tracks. If the CHRB doesn't receive approval from both tracks, then the board has the authority to unilaterally move race dates around, but only if it receives a race dates application which is subsequently posted for at least 10 days. If necessary, the board can hold an unscheduled board meeting at the end of those 10 days.

In a further development Wednesday, the DRF reported that racing on the track's 6 1/2-furlong downhill turf course has been temporarily suspended. This follows the catastrophic injury Arms Runner suffered Sunday in the GIII San Simeon S. on the same course. Four races–one on Thursday, one on Friday, and two on Sunday–will instead be run on the main track, and no date has been given as to when racing might resume on the downhill turf course, the DRF reported.

In her open letter to the CHRB, Feinstein wrote that she is “appalled that almost two dozen horses have died in just four months.” She also mentioned the pending Barr-Tonko bill–The Horse Racing Integrity Act of 2019–which, if passed, would implement a national uniform medication program. “I would appreciate your views on this legislation and whether additional provisions should be added to strengthen it,” Feinstein wrote.

“I understand the Board recently approved measures to strictly limit the use of whips on horses and to phase out the use of race day medications,” Feinstein wrote. “While these are positive initial steps, please let me know whether the Board is considering other actions that have been proposed by trainers and animal welfare advocates, including the complete elimination of medications such as Lasix and the use of synthetic track surfaces. In your view, would these or other steps be reasonable measures to prevent horse injuries and death?”

Winner said that the investigation into the 23 fatalities is ongoing.

“There's a lot going on,” he said. “As you know, we're working with the district attorney, and there are subpoenas out. There are 21 necropsies that are back and being studied and evaluated. And so, we are proceeding as fast as we possible can to try to determine what if anything can be pin-pointed as a cause or the cause.”

The loss of one horse is “one horse too many,” said Winner. “But we also have to care about and do care about the human factor. All this talk about moving or cancelling, you have to think about the thousands of jobs at stake–people who have to feed their families, who work on the back stretch, or the concessions stands, or the valets, or the tractor drivers. All the support on the farms. People tend to forget that.”