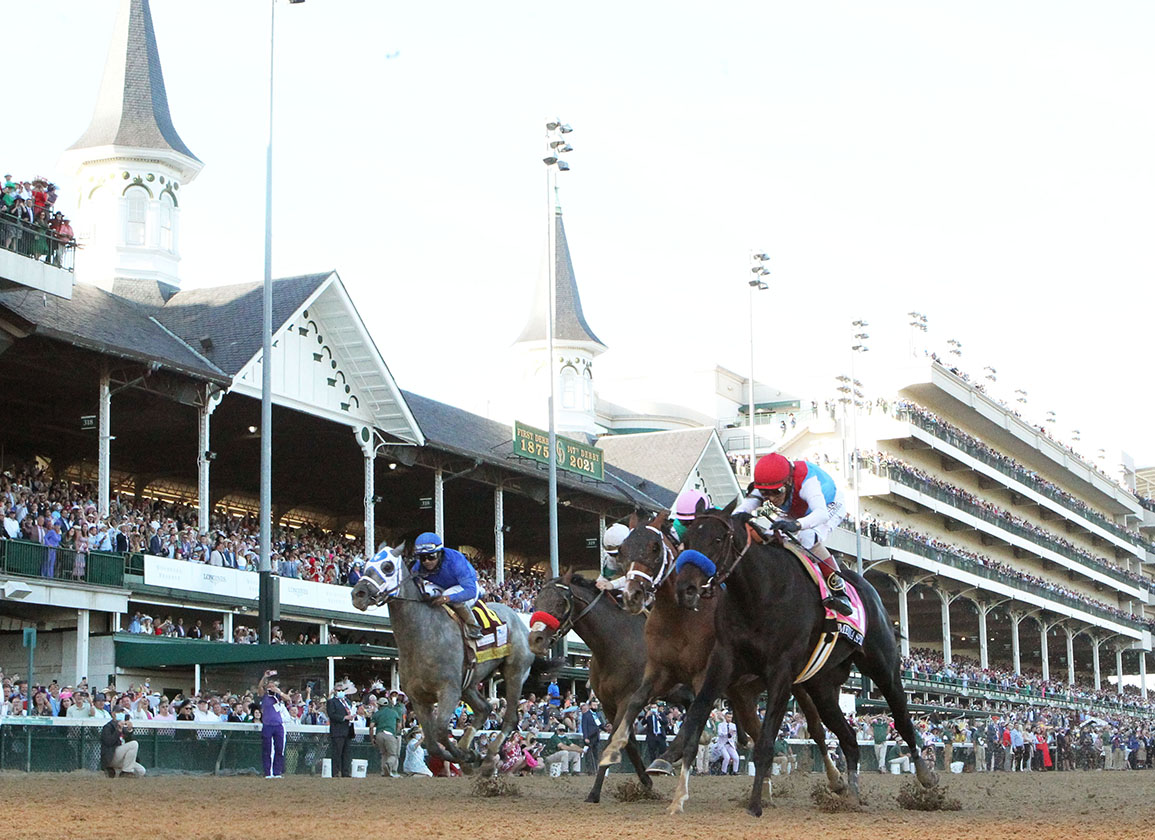 The cause of GI Kentucky Derby winner Medina Spirit's (Protonico) sudden death on Dec. 6 at Santa Anita remains undetermined, according to the findings of a necropsy on the horse.

In a news release issued in tandem with the necropsy report Friday, the California Horse Racing Board (CHRB) stated that a “definitive cause of death was not established despite extensive testing.”

As per the CHRB news release, while omeprazole—an anti-ulcer medication—and the ubiquitous diuretic Lasix were detected in blood and urine samples, these findings were consistent with the medication report filed with CHRB by the attending veterinarian.

“No other drugs, heavy metals (including cobalt), or toxicants were detected,” wrote the CHRB.

The necropsy report itself summarises the findings of the study, which experts say are indicative of sudden cardiac events in racehorses.

“The most remarkable gross and microscopic changes were pulmonary congestion and edema, with milder hemorrhage. There were also congestion and small hemorrhages in multiple organs. No significant evidence of prior episodes of pulmonary hemorrhage other than a single and mild focus of hemosiderosis was observed,” the necropsy report states.

According to the report, “detailed microscopic examination” of the heart revealed minimal changes in the myocardium, the muscular layer of the heart.

“Although the significance of this finding remains undetermined, it is likely incidental because of the limited extension and severity, and also because similar changes have been seen before in horses dying of non-cardiac related causes (e.g. euthanasia). In addition, mild remodeling (thickening of the adventitia) of the intra-pulmonary veins was observed. This is also likely an incidental finding,” the report states.

“Considered altogether, the results of the post-mortem examination, histopathology, and ancillary testing, are supportive of a sudden cardiorespiratory arrest as it may occur with acute cardiac failure. A defect in the cardiac conduction system should be considered as a possible cause of cardiac failure,” the report states.

Unrelated to the sudden death, the pathologists discovered degenerative joint disease in Medina Spirit's four fetlocks and both elbow joints. These sorts of issues are typical in racehorses.

The necropsy was performed at the California Animal Health and Food Safety (CAHFS) San Bernardino laboratory, by a team who form part of the diagnostic laboratory system of the University of California-Davis (UC Davis) School of Veterinary Medicine.

In its news release, the CHRB outlined the mechanics of the necropsy, which included the collection and examination of tissue samples from the heart, lungs, liver, spleen, kidney, stomach, intestines, muscle, brain, spinal cord, testicles, and other glands. Additionally:

–       A blood sample was sent to Cornell University to be tested for thyroxine.

–       Blood, urine, and aqueous humor samples were screened for “hundreds” of legal and illegal drugs and substances, including erythropoietin (EPO), clenbuterol, and betamethasone.

–       Heart tissue samples were sent to the University of Minnesota and to the UC Davis Veterinary Genetics Laboratory as part of ongoing collaborative research program with the CHRB investigating possible genetic causes of sudden death in racehorses.

In his response in the necropsy report, Grant Maxie of the University of Guelph, explains how cases of sudden unexpected death in racehorses are “frustrating to deal with, and frequently remain unresolved, as in this case.”

and dysrhythmia, but such comments are speculative in postmortem cases.”

Marked acute pulmonary congestion and edema in this case is “consistent with acute heart failure,” he writes.

During a media Q&A Friday morning after the release of the report, representatives of UC Davis explained how the necropsy performed on Medina Spirit mirrored those performed on other racehorses who have died in California, except for one difference: US Davis sent the report for peer review.

“We tried to find somebody to look at the drug test but we weren't able to,” said Hill, who explained that the university they approached raised liability concerns.

“We weren't able to get the contract turned around in a timely manner, and we thought it was more important to get the results out,” Hill said.

The Bob Baffert-trained Medina Spirit collapsed and died after a scheduled workout on Dec. 6 at Santa Anita.

Medina Spirit's death triggered a wave of international headlines, not only because the horse faces possible disqualification from the Derby after a post-race sample tested positive for betamethasone, but also because seven Baffert trained horses infamously died suddenly during training or racing between 2011 and 2013.

A subsequent CHRB report found that those horses had been uniformly administered thyroxine-a thyroid hormone used to treat hypothyroid conditions-and that use of thyroxine is “concerning in horses with suspected cardiac failure.”

During the Q&A, UC Davis's Francisco Uzal explained that while the blood sample sent to Cornell University showed thyroxine levels below the limit of detection, he was unable to confirm if that result was “significant” as such blood samples are typically collected from live animals.

“If this was blood from a live horse, you could speculate that this horse was producing very little thyroid hormone. But because it came from a dead horse, we don't know how to interpret that,” Uzal said.

As highlighted in this TDN article from 2018, a host of unknowns typically surround instances of sudden death in racehorses—a term that comprises many different causes, not simply issues related to the heart.

Sudden death includes massive bleeding in the lungs or abdomen, fractures of the skull or neck, and hemorrhaging from a pelvic fracture-all these injuries can prove swiftly fatal in a manner that, outwardly, resembles a cardiac issue.

Even when post-mortems are performed, when it comes to sudden cardiac death, oftentimes there are no lesions, ruptured arteries or damaged heart tissue that pathologists can point to with authority and say this or that caused the heart to stop.

In a 10-year period between 2007 and 2017 in California, 8.2% of all training and racing related fatalities were sudden deaths. So, what are the possible causes of so-called equine heart attacks? Answers aren't always easy to come by.

This comprehensive 2011 international review study points out that pathologists were only able to make a definite diagnosis in 53% of cases, a presumptive diagnosis in 25% cases, with 22% of cases left unexplained.

Indeed, rupture of the aorta-the largest artery in the body-is “anecdotally thought to be a common cause of exercise-related sudden death in horses,” but that it occurs in only 1% of cases, the study found.

There are other possible causes. Unlike human heart attacks due to clogged arteries, the sheer size of the equine heart makes them susceptible to electrical irregularities, like arrhythmias—an irregular heartbeat—and heart murmurs, the presence of irregular heartbeat sounds.

Experts point to a possible connection between the use of substances like clenbuterol, calcium, magnesium and cobalt—those that can alter equine cardiac muscle—and sudden cardiac death. But that connection hasn't been made definitively.

What's more, there have been efforts to try to identify a possible connection between certain genes in horses and a higher susceptibility towards cardiac problems. But again, this is a sphere of research with a lot more leg-work needed.

The investigation into Medina Spirit's death isn't over, however.

A review of the necropsy report will now be performed by official veterinarian Alina Vale, a CHRB safety steward and a member of the Board of Stewards. The CHRB will eventually publish this separate report.

“Any potential rule violations uncovered in this process will be investigated by the CHRB and would result in a complaint and possible disciplinary action.  This process takes place for every fatality occurring at a CHRB regulated facility,” according to the CHRB.