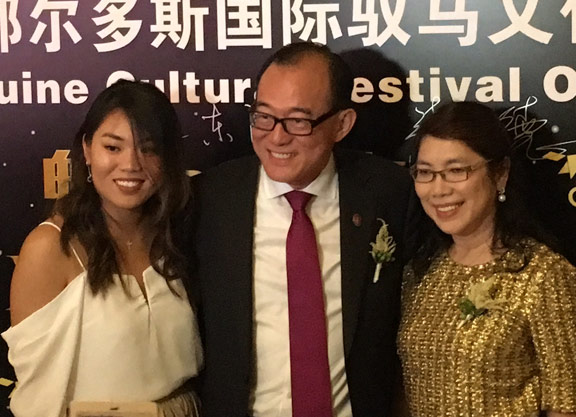 “With a mantra of 'Bring the World to China, China to the World,' we are blessed to welcome guests, partners, sponsors, jockeys, and racing officials from all across China as well as from Europe, America, Asia, Australasia, and the Caribbean,” said Teo, the chairman and founder of the China Horse Club. “The diversity of this event is instrumental in creating wonderful occasions and interactions.”

Starting with drinks and appetizers, the welcome party served as a way to let all of the participants mix and mingle before turning their attention to racing. After being ushered into a dramatically lit room, Eden Harrington, the vice president of the China Horse Club, served as the host for the evening.

During the party, awards were handed out; art work was auctioned off for a charity; traditional dress was displayed in a fashion show; sponsors, trainers, owners, and jockeys were thanked; and a new Yitai desert song titled “Heroes Are Flying” debuted.

Among those listening to Harrington's words were Elliott Walden, the president of WinStar Farm and a regular partner with the China Horse Club, as well as representatives from the likes of the Australian Turf Club, New Zealand Bloodstock, Goffs, Tattersalls, Inglis, Magic Millions, Ocala Breeders' Sales Company, and Keeneland.

Additionally, renowned artists Li Xiaoling, Cai Zhisong, Shize, Huqing and Pushi–who each contributed their work for the charity auction–were part of the 250 or so people in attendance.

The highest honor of the night, the Lifetime Achievement Award, went to John Warren, who is both the bloodstock advisor for Queen Elizabeth II as well as the chairman for the China Horse Club's International Advisory Council.

First held in 2013, the CECF has grown exponentially as Khing works to make Thoroughbred racing an accepted sport in China. As the signature event created by China Horse Club, the CECF has been designed to cater to the social and business requirements of the club's elite membership group while appealing to a mass market audience through Thoroughbred racing and other cultural events.

In 2016, the first year the CECF was held in Ordos, the four-race card drew over 20,000 people, which surprised even the organizers. Their expectations for this year's races remain modest, although the indicators are there that another large crowd will be on hand.

“We take pride in whatever we plan and execute,” said Teo. “Anything more than a crowd of 10,000 is deemed as a major event in communist China. We did not expect that our CECF the first year in Ordos would draw more than 20,000. We expected 8,000. We purposely wanted 8,000 because that falls below the rudder, and we wanted to classify as a small event, but it exploded into a large event.

“There is a lot of pressure this year. The crowd is just one indicator. I think the quality of the event itself should continue to evolve and take care of the needs of the people who come.”

Part of the Bigger Picture

Having the CECF is an integral part of meeting the lifestyle promises of the China Horse Club to its members, but so is success at major racing events around the world.

It started with a bang in Europe with champion Australia (Galileo), and followed with Australian Horse of the Year Dissident (Sebring). This year, the club is making headlines in the United States with GI Kentucky Oaks heroine Abel Tasman (Quality Road), who is a current front runner for end of year honors. In all, the club has won more than 250 races worldwide.

“We try to explain to all of our members to not get over excited, but so far I think in our five-year program the word to explain it is we are very lucky,” said Teo. “For example, our specific plan for the United States spanned three to five years, but within two years things happened. Here came Abel Tasman and Good Samaritan (Harlan's Holiday) and the members got excited. That's the most important thing. Our program in the U.S. has had to be fast-tracked.

“Just like Australia–the first year we enter racing, we get the English Derby winner. We were caught and surprised. We learned from the Australia experience, and now I think from Abel and others, we have learned and we have something to be proud of.”

Looking forward, the China Horse Club has its eye on attending both the Breeders' Cup World Championships in California as well as the first ever running of The Everest in Australia, which aims to be the richest turf race in the world. First though, comes the humbler but vitally important day of races at Ordos.

“I think Breeders' Cup in November we are going to see some healthy crowds, and before that, we are talking about perhaps taking part in the experience for the Everest in Sydney,” said Teo. “I think October and November will be two highlights for us, after our meet here.

“The China Horse Club is now a brand, and they are now asking whether they can join. We still have a youth membership, and they say, 'What is the age?' and I say, 'It is 65 and below.' We have been systematically, step-by-step introducing the concept of racing to China.”