Cheekaboo Crashes The Party In Honeymoon 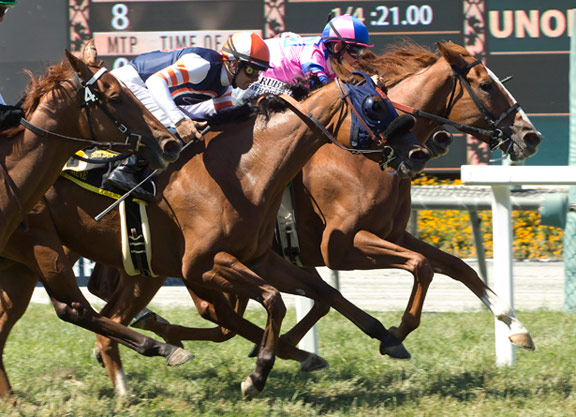 The California-bred Cheekaboo blew up the tote at odds of 23-1 to capture the GII Honeymoon S. in just her second try against open company Sunday. Away well, the chestnut sat well back off the early pace in seventh under a patient Mike Smith as Gone to Bali (Gone Astray) ticked off opening splits of :22.72 and :45.92. Closing in a bit on the fence, but still left with plenty to do approaching the far turn, she split rivals in mid-stretch and got up between favored rivals Stays in Vegas and Be Mine just in time to score. Smith also captured Saturday’s feature race, the GII Summetime Oaks, aboard undefeated champion Songbird (Medaglia d’Oro).

“Wasn’t that awesome? I don’t know what it looked like, but it was fun as hell to ride,” Smith enthused. “I kind of feel like, ‘Ok, now people can see I can ride a little bit. I can do more than just hang on to Songbird.'”

The Hall of Famer continued, “I followed [trainer] Pete [Eurton]’s instructions, almost to a T.’ I saved all the ground that I could and I cut every corner and he told me to go for broke’ and to see if we could get lucky, get through, or in between. He said I should ride it that way, so I did. I have to give him the credit.”

Second in her first two turf attempts last fall, including a debut against open company, Cheekaboo graduated in a state-bred test on the main track here Jan. 10 and returned just 20 days later to finish third behind “TDN Rising Star” Pacific Heat (Unusual Heat) in the California Cup Oaks over the local lawn. Fifth in a Cal-bred allowance back on the Arcadia dirt Mar. 17, she earned her first black-type victory in the turfy state-bred Campanile S. at Golden Gate May 1 and was third last time behind undefeated Cal-bred Enola Gray (Grazen) in the Melair S. back on this venue’s main track May 28.

The winner has a 2-year-old full-brother named Cheekaboomboom and a yearling half-sister named Pulpacheeks (Lucky Pulpit). Her dam produced another full-sister to Cheekaboo Mar. 4.