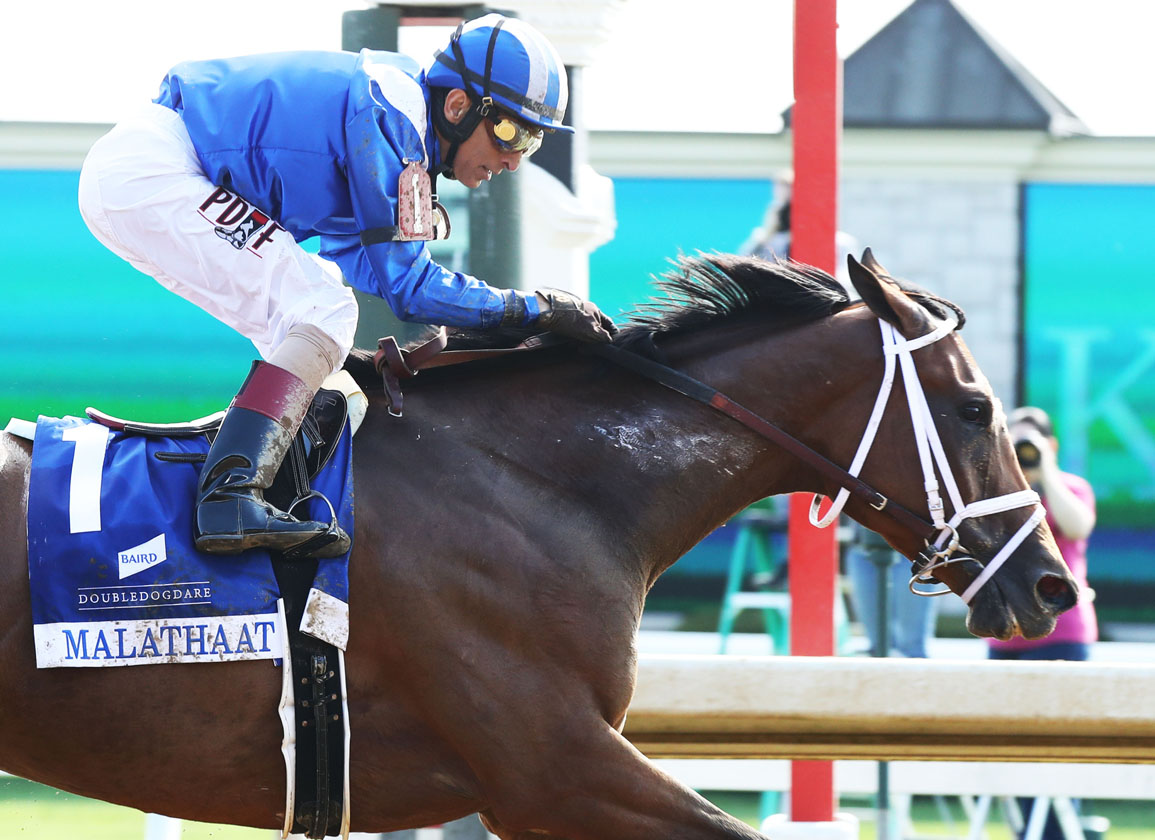 Champion and 'TDN Rising Star' Malathaat (f, 4, Curlin–Dreaming of Julia, by A.P. Indy), last seen rallying for third in the GI Breeders' Cup Distaff at Del Mar Nov. 6, kicked off her 4-year-old campaign with a hard-fought win as the 1-5 favorite in Friday's GIII Baird Doubledogdare S. at Keeneland.

Drawn on the fence in this six-horse affair, she was guided out and into the clear in the two path by John Velazquez rounding the clubhouse turn. Fourth heading down the backstretch, Malathaat began to edge closer rounding the far turn and made a three-wide bid at the top of the short stretch. She took over shortly thereafter, hung on her left lead in the lane, switched over close to home and had a 3/4-of-a-length over Bonny South (Munnings) at the wire. Super Quick (Super Saver) and Lady Mystify (Bernardini) dead-heated for third.

“She got some time off at Shadwell after the Breeders' Cup and they did a great job with her–she came in looking super,” winning trainer Todd Pletcher said. “We didn't want to overdo it for her first start of the year, and we had it in the back of our minds not only that she won the Ashland here, but [this year's] Breeders' Cup is here as well.”

Pletcher added, “[Velazquez] thought he was a little too far back and then all of a sudden, he got there, maybe a little sooner than he expected, but she was all class in the end.”

Malathaat is the second foal from her dam, the 2012 GI Frizette S. winner who romped by 21 3/4 lengths in the GII Gulfstream Oaks, but could do no better than a troubled fourth as the favorite to upset-minded stablemate Princess of Sylmar (Majestic Warrior) in the GI Kentucky Oaks.

Second dam Dream Rush won the GI Darley Test S. in 2007 and was subsequently sold to Halsey Minor for $3.3 million at that year's Fasig-Tipton November Sale. She remained in training into early 2009, but was retired and covered by A.P. Indy for her first cover. Dreaming of Julia was foaled Mar. 3, 2010, and Dream Rush would go on to produce SW 'TDN Rising Star' Atreides (Medaglia d'Oro) and MGSW 'Rising Star' Dream Pauline (Tapit).

Malathaat is one of any number of top-class runners bred on the Curlin-A.P. Indy cross, which includes Grade I winners Stellar Wind, Global Campaign, Paris Lights and Idol.

Dreaming of Julia is the dam of a 2-year-old full-sister to Malathaat, a Medaglia d'Oro yearling filly and a filly by Curlin of this year.