Champion Jackie's Warrior Returns a Winner in the Count Fleet 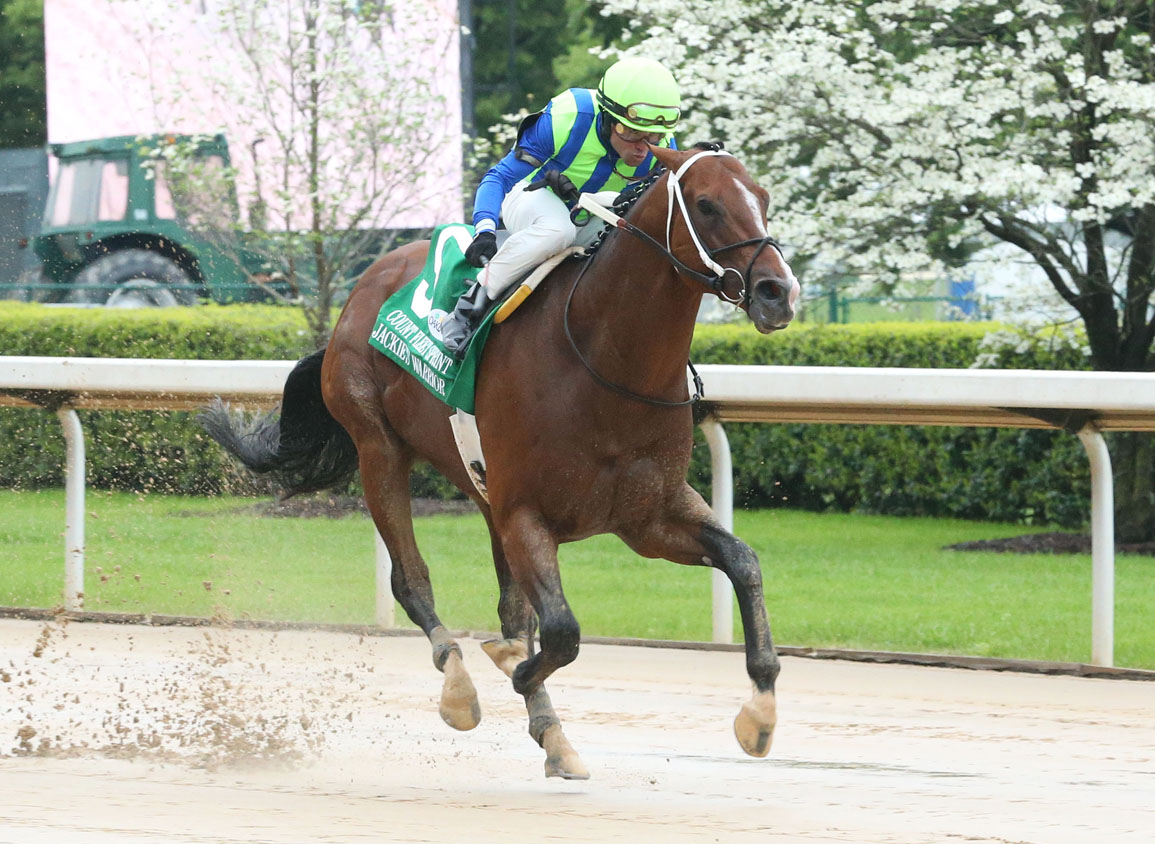 Champion Jackie's Warrior (Maclean's Music) returned as good ever, taking the GIII Count Fleet Sprint H. in gate-to-wire fashion Saturday at Oaklawn. Receiving first-time Lasix for this seasonal bow, the 1-2 chalk took up his preferred position at the head of affairs, zipping out to a clear lead. He was quickly joined by 28-1 shot Empire of Gold (Goldencents), who pressed the Eclipse winner through a sharp first quarter in :21.61. Jackie's Warrior tugged a bit clear of the longshot through a :44.51 half-mile and turned for home in front. The bay was still on cruise control in early stretch, but the field closed in entering the final sixteenth and Joel Rosario shook the reins at Jackie's Warrior. He showed his typical guts and grit, forging clear for a one-length success over a late-flying Letsgetlucky (Munnings).

“Joel [Rosario] let's him do what he wants to do, but he's responded to Joel,” trainer Steve Asmussen said. “I think that he needed the race and that is apparent. But what a great starting point for a champion.”

Asmussen indicated Jackie's Warrior will make his next start in the GI Churchill Downs S. May 7.

Capturing the GII Pat Day Mile at Churchill May 1 after a failed attempt at two turns in the GIII Southwest S., Jackie's Warrior did all the dirty work in the GI Woody Stephens S. in June, but was overtaken late by Drain the Clock (Maclean's Music), finishing a neck second. A dominant winner of the GII Amsterdam S. next out at Saratoga Aug. 1, the $95,000 KEESEP buy battled next-out GI Breeders' Cup Dirt Mile winner Life is Good (Into Mischief) stride-for-stride down the Saratoga stretch in the GI H. Allen Jerkens Memorial S. Aug. 28, gamely fending off that foe by a neck in what was arguably the most exciting race of the year. The easiest of winners in the GII Gallant Bob S. at Parx Sept. 25, Jackie's Warrior was favored to take the GI Breeders' Cup Sprint at Del Mar Nov. 6 and led through the first half-mile, but eventually faded to sixth.

Much has been written of Hill 'n' Dale's stallion Maclean's Music, from his sole brilliant race start that earned a 114 Beyer Speed Figure to his equally quick start at stud with a first-crop Classic winner in GI Preakness S. hero Cloud Computing. But unlike his “one and done” race career, Maclean's Music has continued to churn out the stakes winners, with 25 black-type winners–six graded–to date. In addition to Cloud Computing, Maclean's Music's sons Drain the Clock, Complexity, and Jackie's Warrior are all Grade I winners, with the Count Fleet winner the most productive of the bunch as a three-time GISW and last year's champion male sprinter.

Much has also been written about Jackie's Warrior's dam, Unicorn Girl, from the detailing of her career with Carlo Vaccarezza to what led to her sale at Keeneland November in 2020 for $850,000 to Arthur Hoyeau. The mare has a 2-year-old colt by American Pharoah, who brought $600,000 at the 2020 Keeneland November sale from M.V. Magnier, and a Mar. 18 filly by Into Mischief. Unicorn Girl traces directly to the 1869 blue hen Devotion (GB) (Stockwell {GB}), whose descendants included U.S. Triple Crown winner Gallant Fox and English Triple Crown winner Rock Sand (GB), as well as Classic winners in France and Germany.

Unicorn Girl's sire, the MGSP A. P. Five Hundred, has spent most of his stud career in Chile, but produced a single U.S. crop in 2005, of which Unicorn Girl was a member. Jackie's Warrior is the sole U.S.-bred stakes winner out of his daughters.