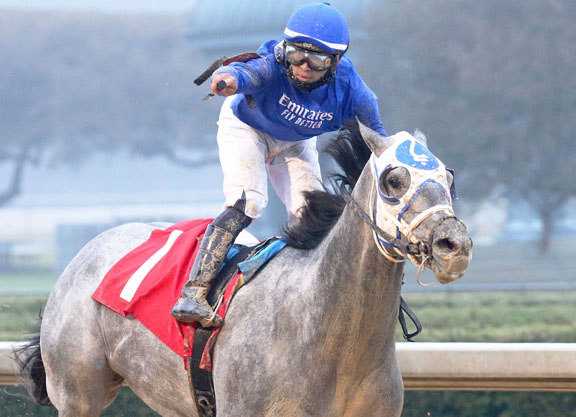 Mother Nature did her level best over the last couple of weeks to try to wreak havoc with the seasonal debut of Godolphin's undefeated Eclipse Award winner and 'TDN Rising Star' Essential Quality (Tapit).

An atypically cold and snowy stretch of weather in and around Hot Springs left the track closed for several days and set maintenance crews the monumental task of first clearing the better part of a foot of snow, then caring for the strip which bore a resemblance more to a construction site than it did Thoroughbred horse track. Oaklawn triumphantly welcomed the return of racing this past Thursday, and Saturday, hosted a potentially mouthwatering match-up between the champ and the outstanding MGISW Jackie's Warrior (Maclean's Music). In the end, however, it was a one-horse show, as Essential Quality belied a near four-month absence and an interrupted training regimen to consolidate his position atop most every Derby poll with a sound defeat of California raider Spielberg (Union Rags). Jackie's Warrior was a valiant, albeit well-beaten third.

“He showed up and ran his race. It was somewhat of a relief to get this race over with,” said trainer Brad Cox. “The delay of the race, the track condition, just a lot of obstacles to overcome. Good horses do overcome, but it doesn't mean the trainer doesn't worry. We just want to wrap him in bubble wrap and get to the next race.”

Favored at 90 cents on the dollar while making his first start since securing the 2-year-old championship in the Nov. 7 GI Breeders' Cup Juvenile at Keeneland, Essential Quality jumped neatly from gate one and was almost immediately guided away from the inside by Luis Saez, as 6-5 Jackie's Warrior made the running from the two path in advance of the progressive Woodhouse (Speightstown). As he did with Mystic Guide in the Razorback a few races earlier, Saez kept the gray colt in the clear and out of harm's way while tugging against him through the middle stages before allowing him to take closer order on the second turn. Handled confidently while asked to win his race three wide off the final corner, Essential Quality eased alongside the dueling pacesetters after six furlongs in 1:13.59, easily claimed Jackie's Warrior in upper stretch and powered home a much-the-best winner. Spielberg was slowly into stride from the outside alley, took a mild run at the eventual winner passing the midstretch marker and kept on to be clearly second.

“The plan was to try to follow him [Jackie's Warrior] the whole way,” Saez said. “Everything came together. He broke pretty well and at the five-eighths pole he took the bridle and was really pulling me, but I was waiting, just trying to wait with him. We came to the stretch just so easy. He switched leads and just took off. What a nice horse. He finished very strong and I still had a lot of horse.”

Accorded 'Rising Star' status off an impressive four-length debut success over six furlongs of the Churchill main track on the Derby undercard Sept. 5, Essential Quality validated 19-10 favoritism to give his owners a second consecutive victory in the GI Claiborne Breeders' Futurity at Keeneland Oct. 3. The second choice to Jackie's Warrior on Breeders' Cup Friday, the homebred got the race run to suit, as he closed from midpack off a furious pace to best Hot Rod Charlie (Oxbow) and next-out GII Kentucky Jockey Club hero Keepmeinmind (Laoban) by three-parts of a length. Jackie's Warrior attended those enervating fractions and was scarcely disgraced in finishing fourth.

Essential Quality gave his sire the first half of a sweep of the day's Derby preps, preceding by about 20 minutes the scintillating performance of Greatest Honour in the GII Fasig-Tipton Fountain of Youth S. at Gulfstream. His Grade III-placed dam is a daughter of Contrive, the dam of 2005 GI Breeders' Cup Juvenile Fillies and Eclipse Award winner Folklore (Tiznow) and SW & GSP Divided Attention (A.P. Indy). Folklore is the dam of Rhodochrosite (Unbridled's Song), whose son Contrive (Jpn) (Deep Impact {Jpn}) swept all three legs of the Japanese Triple Crown in 2020 and is preparing for a possible 4-year-old debut in the G1 Osaka Hai Apr. 4. Delightful Quality is the dam of a 2-year-old filly by Uncle Mo and is due to the latter's son Nyquist this year.