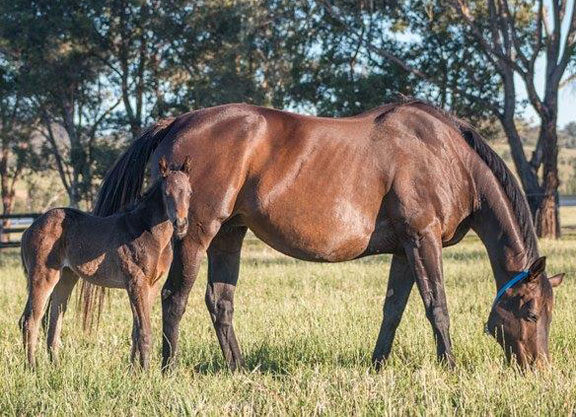 “It’s a sad day for all of us, losing Alinghi and her foal,” said Arrowfield Chairman John Messara. “She was a magnificent racehorse and after more than 11 years with us at Arrowfield, very much part of all our lives. We’re immensely grateful for the joy she gave us, co-owners John Leaver and Alan Jones, her breeders, trainers, original owners and many others, and for her contribution as a broodmare. She has also left us five daughters, four of them already breeding for us, and a gorgeous yearling filly by Deep Impact we’ll now keep.”

Trained by Lee Freedman, Alinghi was named Australia’s champion 2-year-old filly of 2003/04 off wins in the G1 Blue Diamond S., G3 Blue Diamond Prelude and G2 Reisling S., and was third in the fastest-ever G1 Golden Slipper. She added the G1 Thousand Guineas, G1 Robert Sangster S. and G1 Newmarket H. at three before being purchased privately by Arrowfield, Leaver and Jones and sent to the U.S. to join trainer Bobby Frankel. Alinghi won her American debut, the GIII Ballston Spa Breeders’ Cup H. at Saratoga, but suffered a tendon injury after finishing eighth in the G1 Keeneland Turf Mile.

Returning to the paddocks at Arrowfield, Alinghi has produced two winners, including the dual stakes producer Line Honours (Aus) (Hussonet). Her lone colt, America (Aus) (Snitzel {Aus}), sold for A$1.8-million at Inglis Easter in 2015. Alinghi will be buried in the Arrowfield cemetery.