'Champagne' Pops at 33-1 in Juvenile Fillies 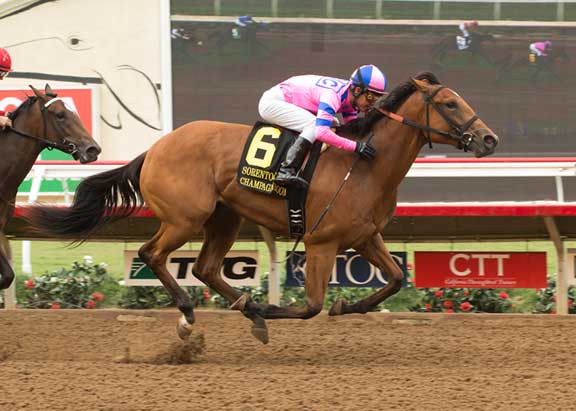 Second on debut in a five-furlong dash at Del Mar July 16, Champagne Room won the Aug. 6 Sorrento convincingly as the 6-5 favorite and completed the trifecta behind reopposing Union Strike (Union Rags) in the GI Del Mar Debutante going seven furlongs Sept. 3. Recently an even fourth in her two-turn debut in Santa Anita's GI Chandelier S. Oct. 1, she was dismissed at odds of 33-1 as American Gal was sent postward as the slight 4-1 choice.

Champagne Room raced in traffic early and stepped forward to secure an ideal spot tracking the pace set by Noted and Quoted (The Factor) from the outside as American Gal was unable to save ground from the 12-hole, traveling seven-wide around the opening bend. Champagne Room remained locked on the outer flank of the pacesetter through measured fractions of :23.77 and :48.19 and dialed up the pressure through six panels in 1:13.01. The bay struck the front turning for home and had enough gas left in the tank to hold off Valadorna's late kick by just less than a length.

“I wasn't feeling utterly confident [down the stretch],” Eurton said. “She was actually moving pretty well. She was getting a little tired, but there wasn't anyone catching her. I'm feeling pretty good right now. This means an awful lot to me.”

Winning rider Mario Gutierrez added, “I had a perfect trip. She broke really sharp. I was able to settle behind the speed and when I asked her, she ran with all her heart today.”

American Gal, wide again around the second turn, kept plugging through the stretch but could only manage third after covering 48 feet more than the winner–or roughly 5 1/2 lengths, according to Trakus data.

“I thought she ran an incredible race considering how wide she had to go the whole way,” trainer Bob Baffert commented. “She's shown she can go a distance and what a good horse she is.”

The winner also represents the first Breeders' Cup success for Joe Ciaglia, a long time partner in ownership with the Alesia family who has recently added new partners to the mix with acquisitions like Champagne Room–who was acquired by Ciaglia for $310,000 at OBS April this year

“We go to the sales with Larry Zap and Peter Eurton, we give them the opportunity to buy what they think is right,” Ciaglia explained. “And they only buy horses that they love, and they love this one. So it's great to have a group of people that can support us and buy in together. It's a lot of fun winning as a group.”

Champagne Room sold for $70,000 as a Keeneland November weanling and RNA'd for $55,000 at Keeneland September as a yearling, prior to her ultimate sale at OBS April. The winner's dam, a half to MSW Inhisglory (Pure Prize) and GSP Hat of Jacks (Cowboy Cal), produced a filly by Drosselmeyer this year and was bred back to Strong Mandate.