Champ Sistercharlie Wins Battle of the Browns in Diana 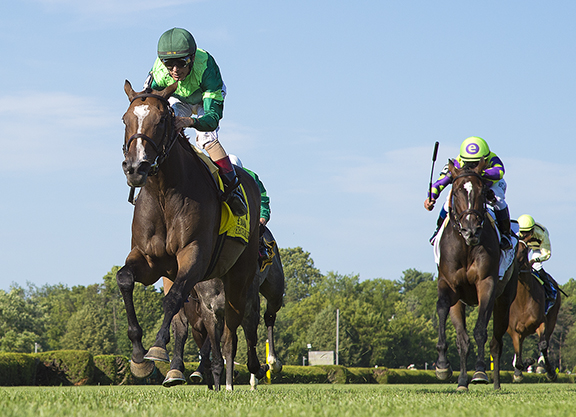 Peter Brant’s Sistercharlie (Ire) (Myboycharlie {Ire}) missed targets in the first half of the season after taking ill, but if her performance in Saturday’s GI Diana S. is a harbinger of things to come for the balance of the year, she could become the first to annex the Filly & Mare Turf back-to-back in California this November.

One of four in the race for trainer Chad Brown, Sistercharlie was somewhat surprisingly sent off the 19-10 second favorite to stablemate and ‘TDN Rising Star’ Rushing Fall (More Than Ready) and took up a position in fifth, inside of Secret Message (Hat Trick {Jpn}) as Thais (Fr) (Rio de la Plata) was gunned to the front by Manny Franco and set an unsustainable pace in advance of GI Kentucky Derby winner Country House (Lookin At Lucky)’s GIII Gallorette S.-winning half-sister Mitchell Road (English Channel). The latter opted out of the speed duel down the backstretch, allowing Thais to bowl along through a half-mile in :45.90 and six furlongs in 1:11.51, but the heavy hitters began to hit their best stride, with Rushing Fall gaining first run three deep outside of Mitchell Road and a spent Thais at the top of the lane. Rushing Fall floated Sistercharlie out into about the five path in upper stretch and pinched a bit of a break nearing the eighth pole, but, possessed of a significantly better turn of foot, Sistercharlie corraled her stablemate and edged away to a decisive tally. Brant’s Homerique (Exchange Rate), previously unbeaten in the U.S., rallied from last to be third despite racing a bit greenly and on her incorrect lead in the final stages.

“Another great performance from a great mare,” said Brown. “She showed why she’s the best. [Owner] Peter [Brant] made the decision to come back and race her another year. He’s a great sportsman and he loves seeing this horse run. We were going to start her campaign a little earlier in the year, and she got sick on us. We had to wait and he was very patient. She just hit all her works right leading up to this race.”

A Group 3 winner in France for Henri-Alex Pantall, Sistercharlie was beaten a neck into second by stablemate New Money Honey (Medaglia d’Oro) in the 2017 GI Belmont Oaks before missing several months owing to an illness. Comebacking winner of the GI Jenny Wiley S. last April, she dropped a head decision to fellow Brown trainee Fourstar Crook (Freud) in the GII New York S. before getting her nose down on the wire in this event. The bay bested Fourstar Crook and Thais in the GI Beverly D. S. in August and capped a championship season with a hard-fought defeat of Wild Illusion (GB) (Dubawi {Ire}) in bottomless ground in the Filly & Mare Turf.

Sistercharlie and Homerique are likely to face a rematch in the Beverly D. at Arlington Aug. 10. Rushing Fall is also a candidate for the 1 3/16-mile test, but could opt for the GII Ballston Spa S. Aug. 24.

One of four top-level winners–two each in the Northern and Southern Hemisphere–and one of two Beverly D. winners (Euro Charline {GB}) for her sire (by Danetime {Ire}), Sistercharlie is a half-sister to Sottsass, winner for Peter Brant’s White Birch Farm of this year’s G1 QIPCO Prix du Jockey Club (French Derby). Starlet’s Sister, a full-sister to French Group 3 winner Leo’s Starlet, is also a half-sister to SW & GI/G1SP Anabaa’s Creation (Ire) (Anabaa), dam of SW Create a Dream (Oasis Dream {GB}). Sistercharlie is a half-sister to the 2-year-old colt Radiant Child (Ire) (Charm Spirit {Ire}), purchased by Brant for €400,000 out of the 2018 Arqana August Yearling Sale, a yearling colt by Fastnet Rock (Aus) and a filly foal by Dubawi (Ire).