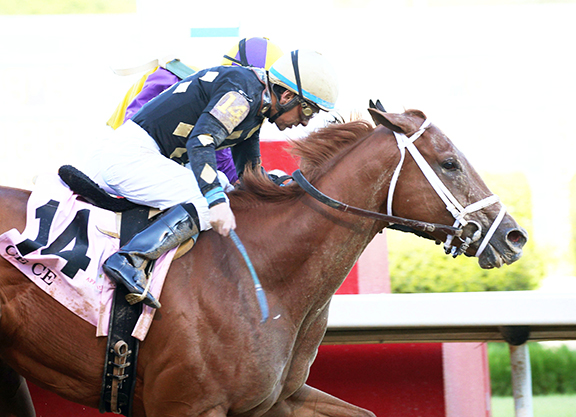 With the end of the championship meet at Gulfstream Park, Oaklawn Park and its Racing Festival of the South is, for all intents and purposes, the current focal point of Thoroughbred racing in North America in the midst of the coronavirus pandemic.

Saturday's GI Apple Blossom H., one of two top-level events staged at Arkansas's spa meeting, attracted an incredibly diverse group of main-track distaffers, including California raiders Ollie's Candy (Candy Ride {Arg}) and Ce Ce (Elusive Quality), who book-ended the 14-strong field when gates were drawn Wednesday. Despite enterprising tactics from the inside by Joel Rosario aboard Ollie's Candy, Bo Hirsch homebred Ce Ce was the recipient of an equally savvy ride from Victor Espinoza from gate 14 and was along in the dying strides to take it by a short head. Point of Honor (Curlin), winner of last year's GII Black-Eyed Susan S. and multiple Grade I-placed thereafter, and Street Band (Istan), whose sophomore season was highlighted by a victory in the GI Cotillion S., rallied from well back and finished heads apart in third and fourth, respectively.

“That was great,” winning trainer Michael McCarthy said. “We were able to sit in a perfect spot, three to four lengths off of them. I'm OK with it now. Had the photo been the other way, I probably wouldn't have been OK with it.”

While favored Serengeti Empress (Alternation) and Florida shipper Cookie Dough (Brethren) figured to go a strong gallop up front, the pace was further fueled by Ollie's Candy, who was somewhat surprisingly not only ridden for speed from the inside stall, but was asked to lead the Apple Blossom field. That mission was accomplished, but it took an opening quarter in an almost-suicidal :22.20 to accomplish and things didn't get materially easier after a half-mile in :45.51. For her part, Ce Ce displayed enough early speed to gain a forward position and she was already into a ground-saving fifth rounding the first turn and held that spot down the back. Angled out into about the five path and in and out of the wake of Serengeti Empress, Ce Ce improved a spot leaving the three-eighths, but Ollie's Candy kicked further in front, despite a six-furlong split of 1:10.27. Well clear into the final furlong, Ollie's Candy kept digging for all she had, but Ce Ce took aim on her entering the final 100 yards and was along in time. The disappointment of the race was Serengeti Empress, who remained a forward factor into the final furlong and a half, but gave way readily from there to finish a well-beaten 11th.

“The idea was to break sharp,” said Espinoza, who won the 2017 Apple Blossom aboard Stellar Wind (Curlin) for Ollie's Candy's trainer John Sadler. “I had to use my brains a little to not go into the first turn too wide. I thought if I could hit the turn four or five wide, then I'm in good shape. I knew if she was good enough, she'd win the race, so I encouraged her out of the gate and put her in a good position. I hit the first turn, three or four wide and it was perfect. I was smiling because it was exactly what I wanted.”

A big-figure debut winner at Santa Anita 53 weeks ago, Ce Ce earned a 97 Beyer when runner-up to subsequent GIII L.A. Woman S. winner Lady Ninja (Majesticperfection) in a May 11 allowance ahead of a respectable fourth to 'TDN Rising Star' Guarana (Ghostzapper) in the GI Acorn S. the following month. Returning from an injury-enforced absence to romp home in a Feb. 17 Santa Anita allowance, she tried two turns for the first time in the Mar. 14 GI Beholder Mile and rolled right past 'Rising Star' Hard Not To Love (Hard Spun) for a 3 1/4-length success.

A half-sister to 2009 Arkansas Derby–then a Grade II–winner Papa Clem (Smart Strike), Ce Ce is one of 17 Grade I winners for her late sire and, in addition to Papa Clem, she is a half-sister to the stakes-placed dam of MGSW Hot Springs (Uncle Mo). Ce Ce's own dam Miss Houdini took the 2002 GI Del Mar Debutante and is a daughter of 1991 GI Hollywood Starlet S. winner Magical Maiden, who also produced the dam of G2 King George S. hero and G1 Prix de l'Abbaye third place-getter Moviesta (Hard Spun). Miss Houdini is also responsible for the once-raced 3-year-old gelding Riggins (Liam's Map) and a yearling colt by American Pharoah. She was bred back to Street Sense last term. This is also the family of champion Good Magic (Curlin).