Cathryn Sophia An Easy Winner of the Forward Gal 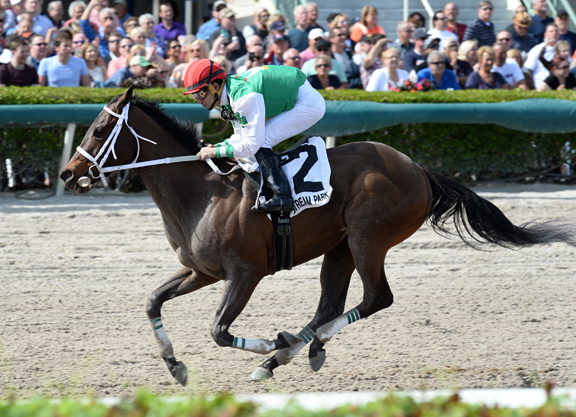 Cathryn Sophia thrashed Parx maidens by 12 3/4 lengths on debut Oct. 30, and aired by 16 1/4 lengths next out in Laurel’s Gin Talking S. Dec. 5 going this distance. She showed an upbeat recent worktab at Palm Meadows leading up to this, and was backed like she couldn’t lose. Surprisingly sluggish early considering the front-running tactics she had employed previously, the bay settled in just behind the leaders while hugging the rail into the turn. Forced to wait for a seam after a half in :45.54, she sliced through rivals hitting the quarter pole and immediately looked like she had it in the bag. She cruised past foes in hand, and galloped home under wraps despite switching back to her wrong lead late.

“She’s a nice filly,” pilot Joel Rosario offered. “I thought she was going to be fast out of the gate and she actually took a little bit of time. When we got to the top of the stretch, she had a beautiful stride and it was all her after that. She was game the whole way. It was very impressive.”

Conditioner John Servis, who was celebrating the end to a graded stakes drought he had endured since Round Pond’s win in the 2006 GIII Azeri Breeders’ Cup S., added, “I think she’ll handle a mile well [in the G2 Davona Dale Feb. 27]. She’ll probably break a lot sharper next time. She hadn’t run for a couple months and I hadn’t gotten her back to the gate. She’s got a great mind. I think now that she broke again and has figured out what she’s supposed to be doing, she’ll leave there running next time and be pretty close, pretty easy.”

The winner’s second dam is Grade II winner and GISP Belterra (Unbridled), who produced SW Taketheodds (Street Sense). Cathryn Sophia is the first foal out of an unraced dam. She has a 2-year-old half-sister by Bullsbay and a yearling half-sister by Denman (Aus). Sheave was bred back to Bullsbay.