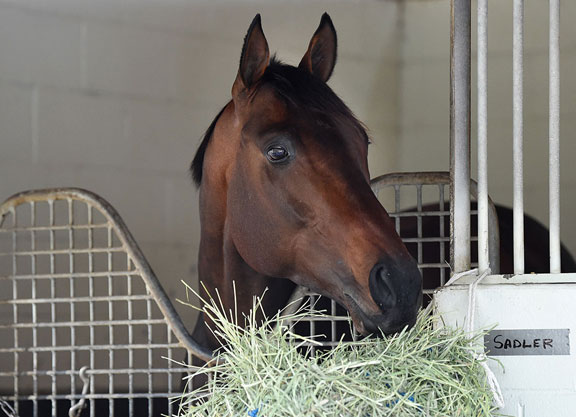 Saturday's rescheduled GI F. E. Kilroe Mile S. may be short on numbers, with just six runners signed on, but it certainly does not lack for quality, with four graded winners–including two at the highest level–among the entries.

It is, however, a horse without a Grade I win to his credit to date that looks toughest of all. Woodford Racing's Catapult (Kitten's Joy) won four of 12 starts for trainer Chad Brown before joining the John Sadler barn, for which he has amassed a record of 5-2-2-0 since linking up last summer. A massive overlay when a 21-1 winner of the GII Eddie Read S. at Del Mar last July, Catapult dropped back in trip and took out the GII Del Mar Mile the following month. The dark bay beat all but Expert Eye (GB) (Acclamation {GB}) home in a boggy renewal of the GI Breeders' Cup Mile Nov. 3, but was tough to settle when last seen in the 9 1/2-furlong GI Pegasus World Cup Turf Jan. 26 and weakened to finish fourth.

Next Shares (Archarcharch), beaten a half-length into second in this event last year, caused a 23-1 upset in the GI Shadwell Turf Mile at Keeneland last October before finishing last but one in the Breeders' Cup Mile. He regrouped with a nose success in the GII San Gabriel S. at this venue Jan. 5, but never got untracked over yielding Gulfstream turf in the Pegasus and came home a well-beaten seventh.

River Boyne (Ire) (Dandy Man {Ire}) had his picture taken following six of his nine starts last season, including Del Mar's GIII La Jolla H. in August and the GII Twilight Derby over this course Nov. 4. Caught late by the gifted Brown trainee Raging Bull (Fr) (Dark Angel {Ire}) in the GI Hollywood Derby Dec. 1, he atoned with a smooth tally in the GII Mathis Brothers Mile Dec. 26, but was only fourth when trying elders for the first time in the GIII Thunder Road S. Feb. 9.