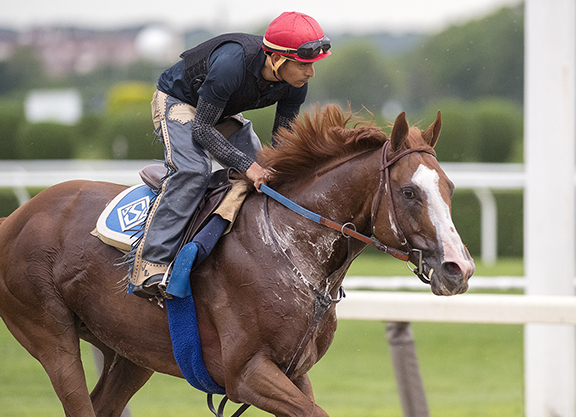 Hronis Racing's Catalina Cruiser (Union Rags), undefeated in two starts to that point, had his coming out party with a 6 3/4-length romp in the GII San Diego H. on opening weekend last summer at Del Mar. He will attempt to repeat that feat as a heavy favorite in Saturday's renewal of the seaside oval's annual prep for the GI Pacific Classic.

Debuting in October of 2017 with a sharp off-the-pace success, the chestnut proved both his talent and versatility when annexing a Santa Anita optional claimer in front-running fashion with an eye-popping 107 Beyer last May. Dominating four rivals in the San Diego, he passed on the Pacific Classic and instead scored an easy 7 1/4-length victory in the GII Pat O'Brien S. Suffering his only defeat when sixth at odds-on in the GI Breeders' Cup Dirt Mile, he returned off a seven-plus month layoff to get up late by a half-length in the GII True North S. last out June 7 at Belmont. The 5-year-old has drilled sharply at his Arcadia base in the interim, including a bullet five furlongs in 1:00 2/5 (1/50) June 29.

Gary Broad's Core Beliefs (Quality Road) looks like the main danger adding blinkers for Peter Eurton. Third to Triple Crown champion Justify (Scat Daddy) in last spring's GI Santa Anita Derby, the bay annexed the GIII Ohio Derby two starts later. Off the board in his next two, he kicked off his 4-year-old campaign with a 9-1 upset of the GII New Orleans H. Mar. 23 at Fair Grounds, but regressed to finish a well-beaten sixth in the GI Gold Cup S. May 27 at Santa Anita.

Dr. Dorr (Lookin At Lucky), a distant runner-up to Catalina Cruiser in the 2018 San Diego, tries to rediscover the form that saw him post back-to-back triple-digit Beyers last spring when romping in the GII Californian S. and finishing second to champion Accelerate (Lookin At Lucky) in the Gold Cup. So far this year, the 6-year-old gelding was second in the GII San Carlos S. and third in the GII Kona Gold S. around one turn at Santa Anita.