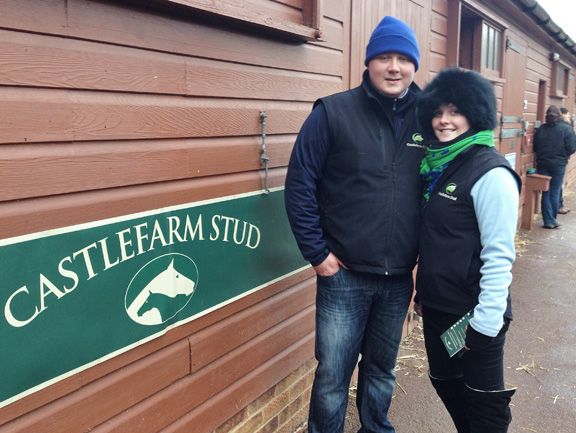 Few people will be looking forward to the return of the dual Group 1-winning juvenile Shalaa (Ire) (Invincible Spirit {Ire}) more than his breeders Mark Gittins and Aisling Kinane.

The young couple first set eyes on each other at Newmarket on the day Aisling's father Mick rode Sea The Stars (Ire) to the first of his six top-flight wins in the 2,000 Guineas, a few months after Shalaa's dam Ghurra (War Chant) had been bought from the Tattersalls December Sale by the Gittins family.

Two years later, the 100 acres of prime Kildare land that comprises Castlefarm Stud would become home to them and, along the way, their sons MJ, four, and Jack, who is almost two, as well as 22 broodmares and their offspring.

“We've been here since January 2011 and we've plans to expand one day,” explains Gittins. “Our broodmare band is increasing all the time and we have a few fillies in training at the moment that we hope to add to the band. We have around 22 mares on the farm, which is a good number, but it would be nice to keep refreshing the pedigrees and trying to improve the stock.”

The vast paddocks skimmed by high, established hedgerows are lime green after a wet Irish spring which has given way to the most glorious of summer days to coincide with the TDN visit in early June. Over the last five years, the stud facilities have been enhanced by the addition of a five-furlong oval gallop in a far tree-lined field, alongside a smart yard to house the horses for breaking and pre-training to offer an extra element to the breeding farm.

The statuesque Ghurra quite rightly acts as if she's the queen of the farm as she stands with an imperious look, allowing visitors to approach her but coolly detached from the sudden entourage in the field she shares with two other mares she clearly feels to be her inferiors. She has no foal at foot this year but she is back in foal to Invincible Spirit, who lives handily close by at the Irish National Stud.

“The plan would be to continue to breed her to him as long as we can,” says Gittins, who adds that Ghurra's yearling filly from the final crop of High Chaparral (Ire) will head to Book 1 of the Tattersalls October Sale. The bay will be consigned under the Norris Bloodstock banner by Liam and Jenny Norris, who have become friends with the couple since Liam bought Shalaa from them as a foal.

“We're obviously delighted to have Ghurra and we'd like to have a few more like her now––we just need to find the next Shalaa. You need to keep evolving as horses can be quickly forgotten.”

It's unlikely, however, that Gittins and Kinane will forget him in a hurry, their faces lighting up as they recall Shalaa's first Group win, in the G2 Arqana July S., almost a year ago.

“No-one was stopping us that night I can tell you, there was plenty of celebrating in Newmarket,” says Gittins with a grin.

A follow-up Group 2 victory in the Qatar Richmond S. paved the way to back-to-back Group 1 successes for Shalaa in the Darley Prix Morny and Juddmonte Middle Park S. The Al Shaqab star ended the 2015 season as the highest-rated juvenile in Britain, behind only Air Force Blue (War Front) in the European rankings. A fractured pelvis has kept him off the track for the early part of 2016 but his trainer John Gosden has indicated that he hopes to have him back in action for some of the later-season sprints.

Shalaa's breeders increased their interest in the family by buying Ghurra's half-sister Alkhawarah (Intidab) at the Tattersalls July Sale in 2011 and her first foal, Oceanus (Ire), (Born To Sea {Ire}), was third on his debut at Newbury behind Frankel's eye-catching first winner Cunco (GB).

Giving Ghurra a serious run for her money in the race to be the favourite mare in the Castlefarm paddocks is the lovely grey Lady Springbank (Ire) (Choisir {Aus}), who was bred by Mark's mother Maura and won a pair of Group 3 races in Ireland in her son's silks. A further family collaboration has seen her benefit from a Galileo foal-share with Mick Kinane––who was in the saddle for all bar one of the great horse's eight races––which has resulted in a strong bay filly foal this season.

“We had great days out with Lady Springbank on the track and there have been good days in the sales ring with her too,” says Gittins. Her first foal, the dual winner Alizoom (Ire) (Invincible Spirit {Ire}) was sold from the same foal draft as Shalaa for 120,000gns, while subsequent foals, a filly and a colt by Sea The Stars (Ire), have made 160,000gns and 165,000gns respectively.

He adds, “Her stock look very racey and we've been lucky that they have ended up with good trainers. The 3-year-old is with Roger Varian and the 2-year-old filly is with William Haggas.

“We'll probably retain the Galileo filly until she's a yearling but everything else is likely to go to the foal sales––we're lucky to have a few to sell by Helmet (Aus), as well as some by Born To Sea and Sea The Stars.”

One of the Sea The Stars foals who may head to the sales is currently alongside his dam, Lady Karr (GB) (Mark Of Esteem {Ire}), the full-sister to Derby winner Sir Percy (GB) who is owned by Aisling's father. As well as being a former Classic-winning jockey, Kinane senior also has bragging rights in the breeding department having been one of the partners in the syndicate which bred Authorized (Ire) (Montjeu {Ire}).

Both sides of the family take an active involvement in proceedings at Castlefarm Stud, with Maura Gittins having been a successful owner for a number of years.

“My parents love racing and love to have horses in training,” says Gittins. “Lady Springbank's foal is shared with Mick so we've had plenty of support from both.”

A number of recent breeze-up purchases from the Craven Sale and Goresbridge have recently joined the Gittins string with a view to becoming Castlefarm Stud mares in years to come, while the Goresbridge-topping Shamardal colt will also race in their colours and has gone into training in Newmarket with Ed Walker. Hopes will be high that he can follow the example of another of their colour-bearers, Lord Shanakill (Speightstown), the winner of the G1 Prix Jean Prat when trained by Karl Burke who has now returned to the land of his birth to stand at Pin Oak Lane Farm in Pennsylvania. From his stallion stint at the Irish National Stud, the 10-year-old is responsible for last week's G1 Prince Of Wales's S. winner My Dream Boat (Ire).

“That gave us all a real boost to watch My Dream Boat win, not just a Group 1 but a Group 1 at Royal Ascot––it was really special,” admits Mark. “He's improved from a rating of 76 this time last year. It's just incredible what Clive Cox has done with him. It's fantastic for Lord Shanakill and for us personally. I'm delighted for his owners, Paul and Clare Rooney, who have invested an awful lot in racing recently.”

He continues, “We started off racing National Hunt horses and then we started to invest in some broodmares and nice bloodlines but thought it would also be good to race a few colts. Lord Shanakill was one of the first yearlings we brought back from America so it was really nice to get a stallion.”

The horses retained or bought as yearlings by the family are all broken in and pre-trained at the farm on the aforementioned recently installed gallop, with the facility benefiting from the wisdom of a particularly experienced work rider.

“Aisling's dad has been great to us––he's here every morning to ride out, so you can imagine we get some pretty good feedback,” offers Gittins.

“On the breaking side, we also have two or three good clients who have been very loyal. It's growing all the time. We broke in 22 yearlings this year but I wouldn't want it to get much bigger than that. The main focus of the farm is on the breeding side and that's what we really hope to develop over time.”