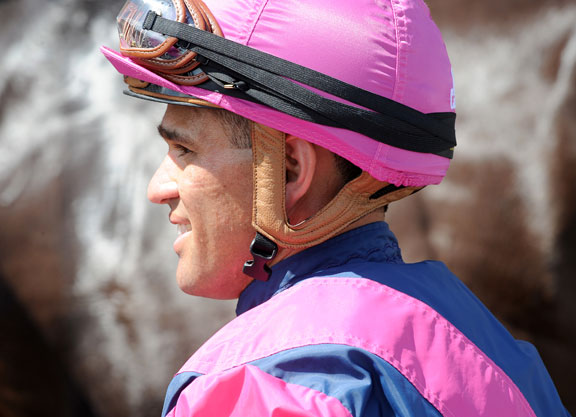 For Hall of Fame jockey Javier Castellano, the hard part of having the coronavirus has not been the physical effects. Relatively young at 42 years old and in peak physical condition, Castellano said he feels “great” and considers himself to be “very lucky and very fortunate.”

But that doesn't mean the coronavirus didn't beat him up, just in other ways. Castellano said Tuesday that the mental toll COVID-19 took on him was substantial and the hardest part of his ordeal.

“This has been one of toughest challenges I have faced in my life,” he said. “That's because I didn't know what to do, what to say. They said I would not have any symptoms for the first couple of days but later on it was going to catch up to me. That's the worst. When you go to sleep, you worry about whether you'll be able to breathe, whether you need to go to the hospital. Then if you go to the hospital you have to be isolated and nobody could have seen me. I didn't know what to think. The problem has been much more mental than physical. I felt fine all along, but I knew that could change.”

It was that feeling of uncertainty, he said, that was the hardest part.

“Everything went through my mind,” he said. “They tell you you have the virus and you think you might die. If they tell you have cancer you know what to expect, what kind of medicine you must be on and what you need to do to get better. In the case of this virus, there's so much we don't know. You don't know how to handle it.”

Castellano last rode at Gulfstream Mar. 15. Afterward, he went to New York, where his wife and children have been living, to spend time with his family. He stayed there when racing resumed at Gulfstream because there was so much uncertainty about whether or not racing would continue in South Florida.

“There was just too much going on,” he said. “Everyone was freaking out about whether racing would continue and a couple of jockeys, like Irad Ortiz Jr., said they weren't going to ride anymore. I decided to wait.”

But Castellano wanted to be back by Mar. 28 so that he could ride on the GI Curlin Florida Derby Day card. Gulfstream required any jockey that had left Florida to take a physical and be cleared before they could ride again. Castellano took the physical and it was announced last Thursday that he had tested positive for the coronavirus. He said he felt fine at the time.

“I was in shock,” he said. “I said to them are you sure that is me? I just ran three miles 24 hours earlier. I'm feeling great. I don't have any symptoms. I don't have a fever. I repeated my name, my date of birth. I gave them my address. They said, 'Yes, sir, it is you, you are positive.'”

Five days after the diagnosis was announced, he said he has felt fine the whole time, saying the worst of it has been a mild sore throat, But he never lost sight of the severity of the situation.

“Everybody needs to be safe, everybody has to stay home and flatten the curve,” he said. “The virus is aggressive. You watch the news and they say we haven't reached the peak yet. I don't think people should be out there and jeopardizing other people. My case is the best example. I didn't have any symptoms. If I didn't take the test I would have thought I was fine. Think of the damage I could have done to other people if I was out there spreading the virus. Then maybe the guy who catches it from me is not going to handle it like I did. Not everyone was going to react like I did.”

Castellano has had to stay in Florida since the diagnosis and is in quarantine at his residence near the track. He's looking forward to having his next physical and hopes that he can then return to New York.

“I want to wait a few days more to make sure everything is fine,” he said. “I feel good. I don't have any symptoms. Maybe I will take a test in a few days and then I will go back to New York.”

Castellano said he feels like he could go back to riding at any time, but going back to New York means he will be sidelined for at least another 23 days. The remainder of the season at Aqueduct

has been called off as the facility is being used to serve as a temporary hospital site. The earliest racing could resume in New York is Apr. 24, the scheduled opening day for the Belmont spring meet. Castellano has the option of staying in Florida and riding there once the quarantine period is over, but said that isn't in his plans.

“There's just too much going on to do that,” he said of riding in Florida. “I want to see what happens with the situation. My family is in New York, my wife and three kids are there by themselves. My kids need support. I want to be there for them and that's the reason I don't want to ride in Florida right now. I need to take time off.”

While in Florida, Castellano is doing what a lot of Americans are doing. He's been texting and talking to friends, watching television and reading. He knows he will ride again, but that's not foremost in his mind. He's been though a lot. Horse racing can wait.