Casse Sees No Reason to Stop Now With 'Empire' 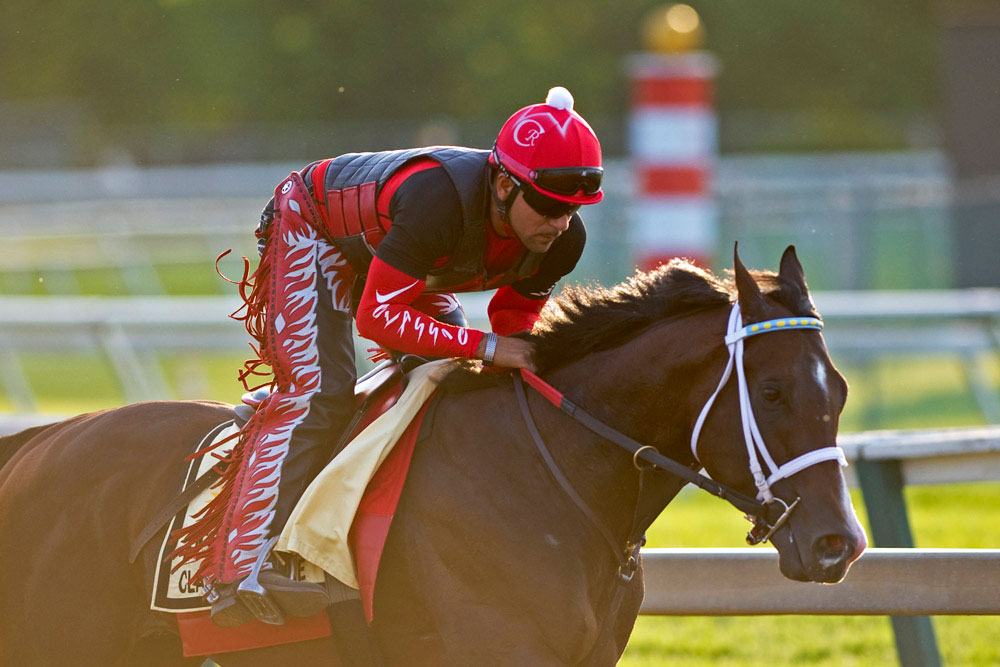 As has been well-documented, next Saturday's GI Belmont S. will be missing GI Kentucky Derby winner Always Dreaming (Bodemeister) and Cloud Computing (Maclean's Music), victorious in the GI Preakness S., each of whom will focus on second-season objectives like the GI Haskell Invitational, the GI Travers S. or the GII Jim Dandy S. or some combination of the above.

Of those listed by the New York Racing Association as probable for the 'Test of the Champion,' just two horses will have competed in each of the legs of the 2017 Triple Crown–Lookin At Lee (Lookin At Lucky), second in the Derby and a running-on fourth in the Preakness; and Classic Empire (Pioneerof the Nile), the reigning Eclipse Award-winning 2-year-old male who endured a horror trip when fourth in the Derby before just being denied victory at Old Hilltop. The latter's trainer, Mark Casse, is approaching the year's final Classic with a can-do attitude and with the impression that his barn houses the 3-year-old king of the hill, despite defeats in Kentucky and Maryland.

“I think I do,” Casse told media assembled on an NTRA national teleconference Thursday afternoon when asked if he believes he conditions the divisional leader. “Our horse just had unbelievably bad luck in the Kentucky Derby. He ran hard in [victory in] the Arkansas Derby–he probably ran harder in the Kentucky Derby than any of his races–and then he showed up in the Preakness. That's one of the reasons we're going to show up for the Belmont. We still feel we have the best 3-year-old and we want to prove it. We've been so close and we feel we've been a bit unlucky. Hopefully the third time is the charm.”

Casse, who has steadily risen through the ranks to become one of North America's top trainers, earned his first Classic placing in the Preakness and he readily adopts the mentality that when horses are doing well, you lead them over.

“We're not afraid to run,” he commented. “I think too many horses sit in the barn when they should be running. If we can run, we're going to run. He's ready to run, so we're going to do it.

He continued, “I would love for the horses all to run in all three races because I think it would truly prove who the best horse is–not only the best, but the toughest. I'm not disappointed that Always Dreaming is not coming, because I think the Preakness showed that he was not at the top of his game right. I think those connections are wise. I am disappointed the Preakness winner is not going to be there. If he's fine, why not? [Going into the Preakness], he had six weeks' rest and we had three races in five weeks. I really don't know why he's not in there, but they own him and Chad [Brown] trains him so they get that privilege. But I'm disappointed he's not there.”

With a little more than a week to go, Casse suggests that whatever may have been bothering Classic Empire earlier this season is a thing of the past and that the colt, who will retire to join his Triple Crown-winning paternal half-brother American Pharoah at Ashford Stud at the conclusion of his racing days, has taken his recent exertions in his stride.

“I thought going into the Arkansas Derby that he looked good. I thought going into the Kentucky Derby that he looked better and was training better than he did into the Arkansas Derby. I thought at Pimlico, he was better for the Preakness than he was for the Kentucky Derby,” Casse opined. “I think our horse has handled it well. He trained great [Thursday] morning and he seems to be thriving. Tepin thrived on running and I think Classic Empire thrives on running. If we get beat in the Belmont, we're not going to say he was tired. We know our horse, we know what we're up against and we're ready for the challenge. If we get beat, we sure aren't going to blame his schedule. He's actually getting bigger and stronger with racing. He's telling us he wants to run, so we're going to let him run.”

As for tactics in a race run historically at a moderate pace, Casse hinted that Classic Empire will be prominent, if not at the head of affairs.

“In the Breeders' Cup and in the Preakness, [jockey] Julien [Leparoux] got pretty aggressive with him early to get him onto the bit and get him up there,” the trainer explained. “In the Belmont, I'm not so sure we want to do that. I'm hoping he'll just fall out of there and I'd like to see him run like he did in the Arkansas Derby, where he was back a little bit.” But, he added, “If nobody wants to lead, we'll be on it.”

And as for the grueling Belmont distance?

“You never like the unknown,” he admitted. “One thing about him–he broke his maiden going 4 1/2 furlongs and he was still finishing going a mile and a quarter on a tough racetrack [in the Kentucky Derby], so I find it tough to believe that can't go a mile and a half. The indication is that he's a great horse, a true athlete and that he can do a little bit of everything.”