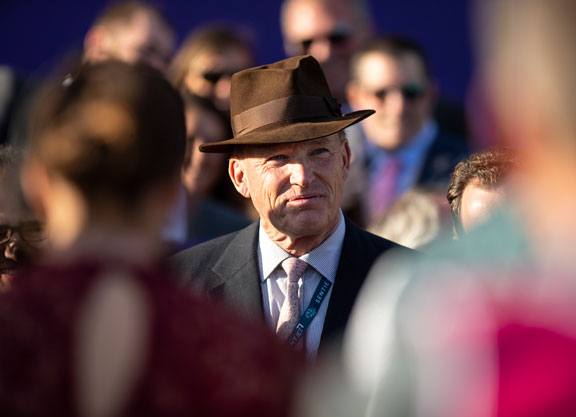 The unveiling of the Cartier Award winners for 2018 has highlighted the dominance of John Gosden, who has ended the 2018 season as Champion Trainer of Great Britain for the third time. It is not merely that Gosden has trained the Cartier Horse of the Year for the fourth time in the last five years, Roaring Lion (Kitten's Joy) following in the footsteps of Kingman (GB) (Invincible Spirit {Ire}), Golden Horn (GB) (Cape Cross {Ire}) and Enable (GB) (Nathaniel {Ire}), who were the Cartier Horses of the Year in 2014, 2015 and 2017. This year, Roaring Lion (who also received the prize for Cartier 3-Year-Old Colt) was one of four Cartier winners handled by Gosden, also responsible for Enable, Stradivarius (Ire) (Sea The Stars {Ire}) and Too Darn Hot (GB) (Dubawi {Ire}), recipients of the awards for Cartier Older Horse, Cartier Stayer and Cartier 2-Year-Old Colt, respectively.

Born in 1951, John Gosden grew up as the son of a very successful trainer, but tragically John Montague 'Towser' Gosden died in 1967 when his son was still at school in Eastbourne. Towser Gosden ranked as one of Britain's best trainers in the decades after the Second World War, sending out numerous high-class winners from Heath House, Lewes, in East Sussex.

Having gained both a degree (in economics) and a blue (for both discus and javelin) at Cambridge, John Gosden set out in the early '70s to follow in his late father's footsteps by securing positions in arguably the two best stables in the British Isles, working as assistant for Sir Noel Murless in Warren Place in Newmarket and for Vincent O'Brien in Ballydoyle in Ireland. After completing his education by working for Tommy Doyle in California (while making sure that his homework included keeping an eye on everything that Charlie Whittingham did with his horses) John Gosden took out a trainer's license there in 1979.

While it's a myth that it never rains in Southern California, it must have seemed to John Gosden and his wife Rachel (whom he had met at Cambridge) as if the sun always shone there. They may well have stayed forever, but Sheikh Mohammed was expanding his empire in Newmarket and needed a trainer. Moulton Paddocks Stables had become available for rent following the retirement of Jeremy Hindley, and the Sheikh had bought Stanley House Stables (formerly the hub of the racing empire of the Earls of Derby) from Gavin Pritchard-Gordon as well as Highfield from John Winter. The Sheikh made Gosden an offer which he couldn't refuse, and in 1989 he and Rachel duly boarded an eastbound 747.

Through the '90s, John Gosden gradually established himself among England's leading trainers. Initially the bulk of his string were Maktoum-owned, such as the trainer's first British Classic winner Shantou (Alleged) as well as Flemensfirth (Alleged) and Sheikh Hamdan's Muhtarram (Alleged) and the top sprinters Wolfhound (Nureyev) and Keen Hunter (Diesis {GB}). He also had, understandably, a nucleus of American owners. George Strawbridge's Presenting (GB) (Mtoto {GB}) finished third in the Derby in 1995 (as did Sheikh Mohammed's Shantou the next year) before Landon Knight's Benny The Dip (Silver Hawk) took his trainer to the summit of his profession in 1997, landing a thrilling short-head victory at Epsom in the Blue Riband.

When Peter Chapple-Hyam relocated to Hong Kong at the end of the 1999 season, John Gosden moved into the Sangster family's estate at Manton in Wiltshire in his stead, thus taking the helm of the property where Alec Taylor Jr had won 11 trainers' championships between 1907 and 1925. After six very successful years there, he and Rachel returned to Newmarket, putting down roots by buying Clarehaven Stables, famous as the former home of the great filly Pretty Polly (Ire) (Gallinule {GB}), at the end of the Bury Road. The property had become available following the death of Alec Stewart, who had trained several top-class horses there including the champion Mtoto (GB) (Busted {GB}).

In the post-war years former dual Champion Trainer Joe Lawson, a long-time assistant to Alec Taylor Jr before taking over as trainer at Manton on the latter's retirement, had made the move from the famous estate to Clarehaven. In his new home and in the twilight of his great career, Lawson had achieved a lifetime's ambition in 1954 when sending out Robert Sterling Clark's Never Say Die (Nasrullah {Ire}) to become the first Kentucky-bred Derby winner. In time, John Gosden would bring even greater glory to Clarehaven than Joe Lawson had done.

While Sheikh Mohammed and his immediate family have been John Gosden's major patrons since the trainer's repatriation, it has been remarkable how broad the stable's ownership base has become. It speaks volumes for the trainer's diplomacy, as well as for the extremely high regard in which he is held, that so many major investors are happy to sit side by side on the same ownership bench. We seem to have moved on from the 'Cold War' when Darley was Darley and Coolmore was Coolmore, and never the 'twain would meet–but even when that seeming stand-off existed, Gosden was far enough above it all to train for both camps simultaneously.

In all, John Gosden trains for nearly every major owner/breeder in Europe, and plenty from other continents too. It is not just that owners know that, by sending their horses to Clarehaven, they will maximise their chances of success; they also know that they will be treated fairly by a man with the dignity to stand unmoved through the earthquake, wind and fire, and to speak throughout with the still voice of calm. It speaks volumes that Gosden's five 2018 Cartier Award winners of the last two years–a list which includes 2017 Cartier 3-Year-Old Colt Cracksman (GB) (Frankel {GB})–were all raced by different people.

To see John Gosden's string going about its business on Newmarket Heath provides on-lookers with the type of education which he made sure that he secured when he took the opportunity to watch Charlie Whittingham marshaling his cavalry all those years ago. It is very rare to see a horse trained by John Gosden misbehaving at exercise, and even rarer to see one who does not look fit, well, healthy and content. It is rarer still to see one of his usually-smiling jockeys or exercise-riders flustered. There is no fuss, no rush, no panic. His several assistants and head lads who supervise the work (each of whom would be more than capable of being a very good trainer in his own right) do so with an aura of calm proficiency and helpfulness. If/when you see one of them helping to coax a difficult horse towards the gallops, the likelihood is that the horse is trained by someone else and they're just lending a helping hand. At the centre of these perfectly choreographed daily equine manoeuvres stands the trainer directing operations; never flustered, seeing all, missing nothing.

This list of champions trained by John Gosden has been growing year by year, as has the list of big races which he has won. His tally of Group/Grade I victories is already into three figures. Among the landmarks which must surely have given him the greatest satisfaction would have been his triumphal 'homecoming' to Santa Anita for the Breeders' Cup in 2008 when Princess Haya of Jordan's Raven's Pass (Elusive Qualilty) won the GI Breeders' Cup Classic. Even more poignant, one imagines, would have been the G1 King George VI And Queen Elizabeth S. victories of Lady Rothschild's Nathaniel (Ire) (Galileo {Ire}) in 2011, of Sheikh Hamdan al Maktoum's Taghrooda (GB) (Sea The Stars {Ire}) in 2014 and of Prince Khalid Abdullah's Enable in 2017. His father enjoyed arguably his finest hour when sending out Sir Harold Wernher's Aggressor (GB) (Combat {GB}) to lower the colours of the mighty Petite Etoile (GB) (Petition {GB}) in the same race in 1960.

John Gosden's Derby victories (two of them at the last count, although that total could obviously rise) must also have brought a lump to the trainer's throat. In his last season (1965) before handing over his stable to Gordon Smyth, Towser Gosden trained a promising 2-year-old colt called Charlottown (GB) (Charlottesville {GB}). The great man lived long enough to see Smyth send his protege out to win the following year's Derby, but sadly not much longer than that.

John Gosden is currently a trainer at the peak of his powers. It is not just that he seems to have perfected the art of having a horse in perfect condition on the day that matters; he has developed an uncanny ability correctly to identify the day that matters, playing his hand of equine trumps with such deftness and assurance that the right horse inevitably ends up in the right race, which can be easier said than done when one is training a large number of good horses for a variety of powerful owners. Gosden currently ranks as undisputedly the pre-eminent trainer in Great Britain, and it is our privilege and pleasure to stand back and watch a master at work.