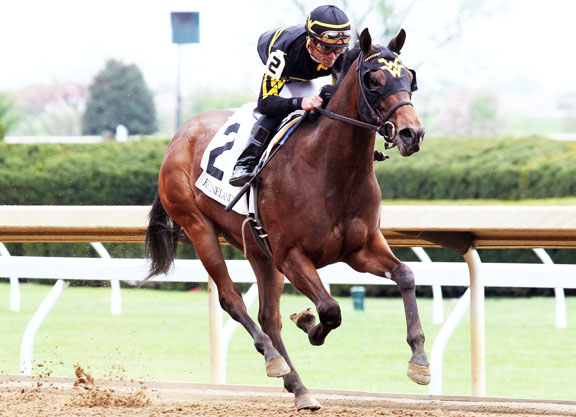 Nayibeth (Carpe Diem), whose first-crop sire (by Giant's Causeway) loved Lexington himself as evidenced by his romps in the 2014 GI Claiborne Breeders' Futurity and GI Toyota Blue Grass S. the following year, became the WinStar resident's first winner from his first starter and a 'TDN Rising Star' to boot Wednesday. Having fired a number of bullets at Turfway and over this strip, the 1-5 favorite beat the gate like a typical Wesley Ward trainee and had only stablemate Owlette (Frac Daddy) at her heels as she zipped along. Getting away from that runner a bit heading for home, she cruised to the line 4 1/4 lengths to the good. There was a large gap back to third place. Nayibeth stopped the clock in :51.54–fellow Ward firster Chili Petin (City Zip) took :52.65 to complete the same trip in the day's second race. The winner is a half to Soldat (War Front), MGSW, $622,760. Stonestreet–who also campaigned fellow 'Rising Star' Carpe Diem after purchasing him for a co-sale-topping $1.6 million at the 2014 OBS March sale–bought dam Le Relais for $800,000 in foal to Blame at the 2011 Keeneland November sale. The half-sister to GSW/MGISP Mulrainy (Star de Naskra) produced a Ghostzapper filly last April but was not bred back that season.