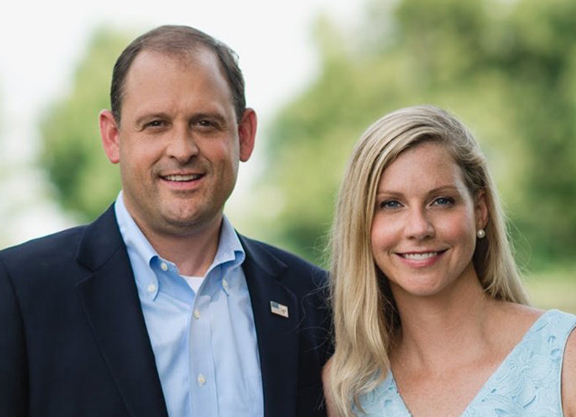 She died of mitral valve prolapse, a condition where the two valve flaps which make up the mitral valve do not close properly.

“Congressman Andy Barr's wife Carol passed away suddenly tonight at the family home in Lexington,” Mary Rosado, the congressman's chief of staff, said in a statement Tuesday night. “During this tragic time, we respectfully ask for privacy for Congressman Barr and his family to grieve Mrs. Barr being called home to heaven.”

Rosado added that Barr “may release a more detailed statement at a later date, but right now is solely focused on being a father.” The couple had two young daughters.

“Britainy and I are heartbroken for U.S. Rep. Andy Barr and his family tonight at the sad news of the unexpected passing of the congressman's wife, Carol. We are praying for the Barr family,” said Gov. Andy Beshear in a statement Tuesday night.

Said Senator Mitch McConnell: “Her warmth filled whatever room she entered and her contributions made Kentucky a better place for all of us. And to Eleanor and Mary Clay, Carol was a wonderful role model and source of constant love. We send our sincere condolences to Andy, their family and his staff at this terribly painful time.

“Kelley and I offer our deepest condolences to Rep. Andy Barr, his two daughters, family, and friend,” said Senator Rand Paul also expressed his sympathies in a tweet. “Please join us in praying for them during this incredibly difficult time.”

According to the Lexington Herald-Leader, Carol Barr, grew up in Georgetown, Kentucky and majored in communications and information at the University of Kentucky. Barr worked for Pfizer and previously served as the executive director for the Henry Clay Center for Statesmanship in Lexington. The Barrs married in 2008.

Barr, a Republican, is running for reelection in in Kentucky's sixth congressional district. His opponent, Josh Hicks said: “While we may disagree politically, we're both family men and I can't fathom the pain he must be experiencing right now.”

Congressman Barr is known as a friend to horse racing and in 2019 reintroduced the Horseracing Integrity Act and is the co-chair of the Congressional Horse Caucus.