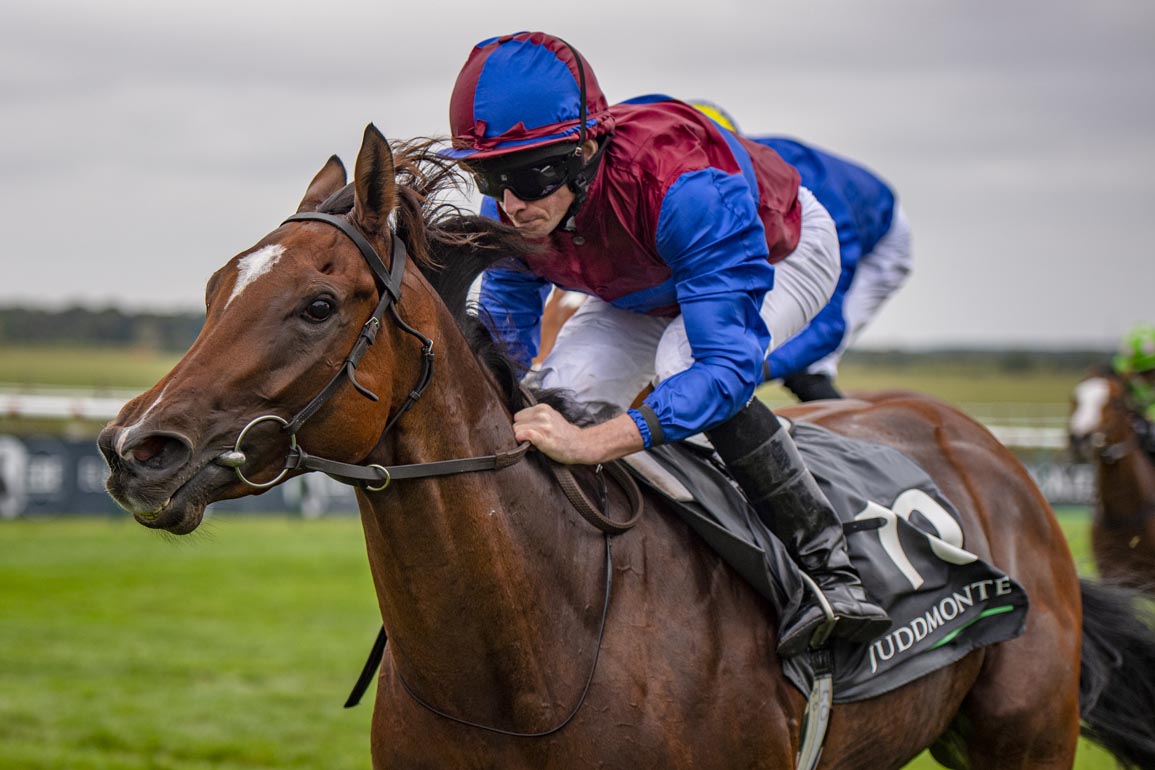 Westerberg, Coolmore and Merriebelle Stables' 2-year-old filly Tenebrism (Caravaggio) was the first runner for her freshman sire (by Scat Daddy), attaining 'TDN Rising Star' status in an instant when posting an impressive 3 3/4-length success in a Mar. 28 five-furlong Naas maiden, and notched another first for the now Ashford Stud incumbent with another taking performance on her comeback in Saturday's G1 Juddmonte Cheveley Park S. at Newmarket. The March-foaled dark bay was under a patient ride through halfway and raced off the tempo in rear. Nudged along to close passing the quarter-mile marker, she quickened smartly to go third entering the final furlong and went through an array of gears on the rise to the line to inhale 'TDN Rising Star' Flotus (Ire) (Starspangledbanner {Aus}) in the dying embers for a one-length success. Kirsten Rausing's G3 Albany S. and G2 Duchess of Cambridge S. victrix Sandrine (GB) (Bobby's Kitten), coming back off a second to Zain Claudette (Ire) (No Nay Never) in last month's G2 Lowther S., ran on well to finish three lengths adrift in third. Zain Claudette never featured at the business end and ran 10th while Juddmonte's hitherto unbeaten G3 Round Tower S. winner Sacred Bridge (GB) (Bated Breath {GB}) tanked into contention at halfway, but was unable to land a telling blow in the closing stages and finished eighth.

“I didn't think it was possible for her to do that, not because of ability but because of the [181-day] lay-off she'd had,” admitted trainer Aidan O'Brien after claiming a fourth renewal. “She had a setback after the last day and was off for a long time. She was just literally ready to come racing and I had a knot in my stomach whether it was fair to be running her or not. But there is only one Cheveley Park and you don't get horses with the speed and the turn of foot she has very often. That's why she's here really. Her dad had a terribly good turn of speed as well and that's what she has. I asked Ryan [Moore] to just get her to relax and find herself and see what's going to happen. She did the very same thing in her maiden and it's a rare thing when you see them able to quicken like that. How far would she stay is the next thing. I had her entered over seven furlongs at the weekend and, usually, if they get seven they might get a mile. Wherever she is, you'll be riding her for speed. You have to train her now as a [G1 1000] Guineas filly and you can come back in trip any time.”

O'Brien, looking to the immediate future, indicated a trip Stateside is an option. “I would say if she's going to go again this year it will be in America,” he said. “The lads will decide if they want to go to the Breeders' Cup and it will depend how she comes out of today. To go travelling would be a great experience for next year and I'd say, if she comes out of it well and the lads want to do it, we'd be delighted to go. It's definitely something we'd have to think about.”

Flotus appeared set fair for victory when bursting clear inside the final quarter mile, but first lady status was denied by the unrelenting surge of Tenebrism in the dying strides. “I thought there was nothing coming out of the pack to catch her, and then you just saw Aidan's filly coming and I thought 'oh, no!',” said trainer Ed Crisford. “She's a proper filly, she ran a huge race and showed what we've been seeing at home. We'll see how she is, there's not that many options left this year. Whether we go to America or not, I'm not sure. She's definitely got the size and scope to make a 3-year-old, which is exciting.”