Caracaro Works Despite The Rain, Tiz the Law Move Postponed 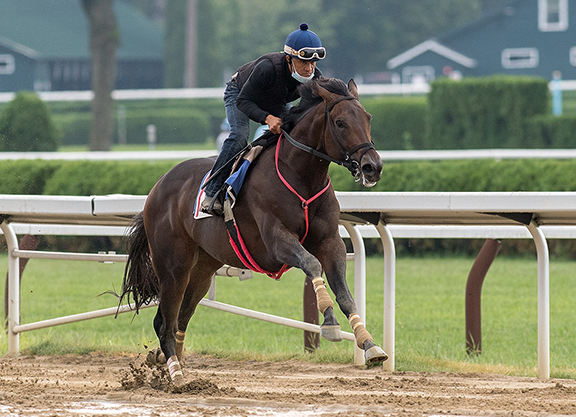 The connections of presumptive GI Kentucky Derby favorite Tiz the Law (Constitution) called an audible Saturday morning when heavy rains pelted Saratoga, opting for a gallop (XBTV video) and moving a scheduled breeze for the treble Grade I winner to Sunday. But the inclement weather did not stop 'TDN Rising Star' Caracaro (Uncle Mo), as he posted a five-furlong move in 1:01.02 over the main track (XBTV video). It was the first serious piece of work for the bay colt since his distant runner-up effort to Tiz the Law in the GI Runhappy Travers S. Aug. 8.

“We wanted something easy. In his first work after the Travers, we just want to see where we're at,” said Gustavo Delgado, Jr., son of and assistant to trainer Gustavo Delgado. “Ideally, we'll have [Hall of Fame jockey] Javier [Castellano] aboard next Saturday. We'll see during the week how he comes back from this work and where his energy level is at, but so far, he's doing well.”

Accorded 'Rising Star' status off his six-length graduation going Gulfstream's one-turn mile Jan. 11, Caracaro was off six months before running Country Grammer (Tonalist) to a neck in the GIII Peter Pan S. on opening day at the Spa July 16. He earned a 101 Beyer Speed Figure for his Travers, in which he was 5 1/2 lengths behind Tiz the Law and two lengths ahead of Max Player (Honor Code).

Caracaro is scheduled to depart for Louisville Aug. 30.