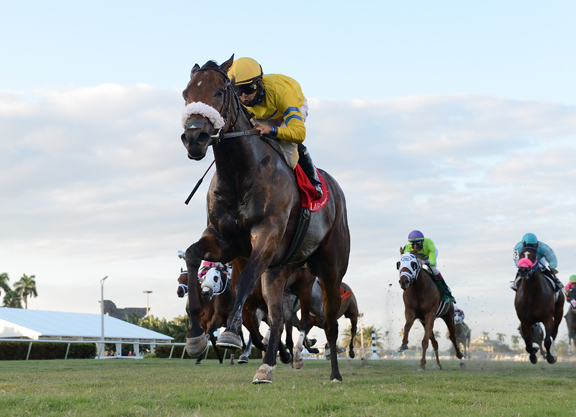 Rob Masiello's fleet-footed Fiya (Friesan Fire) looks to remain unbeaten on the grass while making his first start of the year in Churchill's GII Twin Spires Turf Sprint S. The dark bay broke his maiden third out on the Laurel lawn last June before earning a 98 Beyer Speed Figure for a sharp allowance tally in July for trainer Michael Merryman. He was subsequently offered in the Wanamaker's July Online Auction, and Masiello ponied up $400,000 to acquire him. Transferred to Tom Albertrani, Fiya picked up right where he left off, annexing a Belmont allowance in September followed by the Maryland Million Turf Sprint H. Oct. 24 and the Claiming Crown Canterbury S. at Gulfstream Dec. 5–he had run for a $25,000 tag first out. The versatile Diamond Oops (Lookin At Lucky) won this race last September before returning to the dirt to annex Keeneland's GII Phoenix S. Sixth in the GI Breeders' Cup Sprint, he was most recently ninth in the GIII Mr. Prospector S. at Gulfstream. Trainer Peter Miller is always deadly with a turf sprinter, and will be represented here by Sombeyay (Into Mischief), who was second by a neck in Santa Anita's GIII San Simeon S. Mar. 13. That was just the second time the 5-year-old had gone short on the turf. He took last February's GIII Canadian Turf S. over a mile for previous owner Starlight Racing and trainer Todd Pletcher.