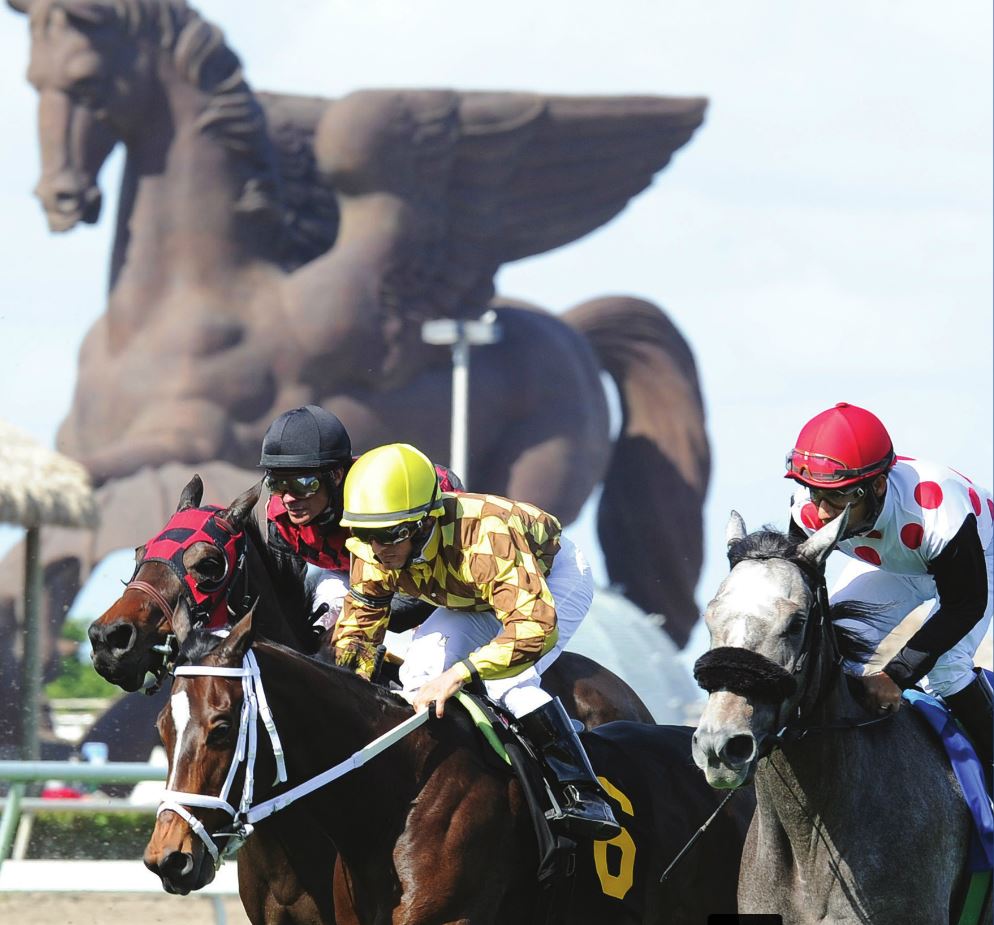 The Pegasus statue at Gulfstream Park

The Thoroughbred industry perpetually wrestles with the concept of how to attract new fans and racehorse owners. And to keep the sport relevant, marketers and publicists are always on the hunt for engaging storylines that will promote interest and foster participation.

Jim McDonald, a former racehorse owner who is the founder of a Pennsylvania-based private equity investment banking platform, is floating an intriguing new concept that might pay off on both of those counts. And if his idea makes it past the “testing-the-waters” phase, it won't cost the industry a penny.

McDonald's goal is to fuse the glitz, glamour, and potential long-term financial rewards of the $12-million GI Pegasus World Cup (PWC) with the “everyman” affordability of crowdfunding. He aims to do this by allowing small-scale investors to buy shares for as little as $250 in an initiative to collectively purchase a $1 million PWC starting slot.

“This is a fascinating new way to introduce casual observers to a big opportunity in the racing industry and to have a vested interest in the PWC,” McDonald said in a phone interview. “From a marketing standpoint, it is interesting to have 12 really rich people participating in a race of this kind. But I think it's exponentially more interesting to have 11 of the richest people around and one starting gate position that's owned by the common man.”

The equity crowdfunding campaign, dubbed Pegasus Crowd, LLC, has been active since Aug. 9. Full details are posted here within the website of McDonald's firm, ALTZ Investment Strategies.
During the 1990s, McDonald was active as a Thoroughbred owner, campaigning about a dozen horses in Maryland. He also participated in partnerships at the national level with several prominent owners, such as Overbrook Farm, with whom he co-owned Lost Pan (Lost Code), the winner of Keeneland's 1994 Phoenix S.

“I'm still a great fan of Thoroughbred racing, although I don't participate [as an owner] any more,” McDonald said. “I love the game, I love the sport, and I most of all love the equine athlete. So this looked to us like an opportunity to involve lots of people in an opportunity that might grow over time.”

McDonald said typical ALTZ clients who want in on one of the sophisticated investments that the firm has on offer typically must meet the Securities and Exchange Commission (SEC) definition of being an “accredited” investor, which generally means having a net worth of $1 million. But recently revised regulations now allow private companies to raise up to $50 million from non-accredited investors, which means you don't have to be one of the 2% of wealthiest Americans to buy in to Pegasus Crowd.

Furthermore, the SEC is cognizant that there is considerable cost involved in registering this type of public offering, so it is allowing these so-called Regulation A+ investment vehicles to “test the waters,” as McDonald puts it. He emphasized that no money is being solicited or accepted for the time being. Rather, Pegasus Crowd is asking potential investors to indicate a financial level of interest and to provide contact information via an online form. If there is significant interest over the next several months, he will then move forward by launching a formal offering, and will contact those who expressed interest.

McDonald is realistic about the tight time frame of the proposed Pegasus Crowd investment. Assuming there is enough investor interest after 10-12 weeks of floating the concept, he said it would take an additional 70-120 days just to process the proper SEC paperwork.

“The truth of the matter is that it's probably unlikely that we'll be able to participate in 2017 because our testing of the waters has just begun,” McDonald said, adding that the initiative could carry over into a bid for acquiring a 2018 PWC slot.

McDonald added that the Pegasus Crowd web portal will be updated on Aug. 26 to show the current level of investor interest.

The Stronach Group (TSG) unveiled the plan behind the PWC in May. Within several weeks, it sold out all 12 million-dollar ownership slots for the $12-million, 1 1/8-mile dirt race on Jan. 28, 2017, at Gulfstream Park. Each slot entitles any horse (not just a specific nominee) to a spot in the starting gate, and the slot-holders are free to lease, contract, or otherwise sell their privilege to start in the race.

Some PWC investors who have already bought in directly with TSG are gambling on value beyond the purse money. In essence, they are speculating that even if they lose money initially, there will be value in the form of having a first option to participate in future PWC races and in the sharing of revenue from PWC handle, media rights, and sponsorships.

“We aren't looking at this in a myopic way. We aren't saying this is a one-year opportunity or a one-race opportunity,” McDonald said. “You have to compare this to any other private equity. If I told you that I was going to be positioning this as a pharmaceutical opportunity, you wouldn't expect to make money in the first few years. And that's the way we view this. [Pegasus Crowd] is a company that's acquiring an asset [a PWC slot], and we think the asset over time has value.

“And to be really honest with you, I think it has much more value if we're involved. Because the demographic of the TV networks, the advertisers, the sponsors; people that the racing game needs to watch and participate, will be attracted to our opportunity more so than watching 12 very rich people compete against one another.”

McDonald said he had a conversation with PWC chief executive officer Jack Wolf prior to floating his concept. “We thought it was a smart idea to let TSG know what we're attempting to do,” he said.

Wolf told TDN that, “If indeed it is approved by the SEC, it's my understanding that the crowdfunding concept is acceptable to TSG. But it's important to point out that the 'shares' Jim is trying to sell are different from the 'slots' that we have already sold to our initial subscribers. If his group wants a starting slot for 2017, they are going to have to try to acquire one in the secondary market from somebody who already owns one and wants to sell or barter it.”

McDonald said the total amount that Pegasus Crowd is seeking to raise is undetermined, because it's open-ended exactly how the crowdsourced slot would be utilized, and since Pegasus Crowd does not have its own horse to fill it. To assist in developing strategies, McDonald has signed on as advisors Eclipse Award-winning trainer Todd Pletcher, Sequel Bloodstock's Becky Thomas, and NBC Thoroughbred and NHL television commentator Eddie Olczyk.

In addition to the investment opportunity, a portion of the offering's proceeds will be donated to the Thoroughbred Retirement Foundation, the Permanently Disabled Jockeys Fund, and the Thoroughbred Aftercare Alliance.

And what does ALTZ get out of the deal?

“ALTZ is not a broker/dealer. I want to make that clear,” McDonald said. “We're an investment platform. And in this particular instance–I want to be careful how I say this–we really don't get much. We are getting a continuing annual fee of probably 1% called an 'investor communication fee.'”

McDonald also disclosed that ALTZ has a business relationship with an online broker, so if Pegasus Crowd does officially launch, investors will need to open a brokerage account with that particular broker. He also acknowledged that ALTZ would benefit from positive publicity if Pegasus Crowd is successful in a big way, which could boost the allure of the company's other investment opportunities.

Even if a deal doesn't materialize in time for the 2017 running, one core value that McDonald is intent on preserving moving forward is the ceiling of the proposed Pegasus Crowd buy-in limit, which is capped at $10,000 per investor.

“I can tell you that we have had was an instance where an individual approached us through a third party about making a much larger investment, and we declined to include that because we would like to take our time here to see if there is an interest among casual spectators,” McDonald said. “One of my hopes is that [Pegasus Crowd] can enable the racing game to attract new blood. And 'new blood' means younger blood, kind of a different demographic. We hope that this promotes that.” @thorntontd