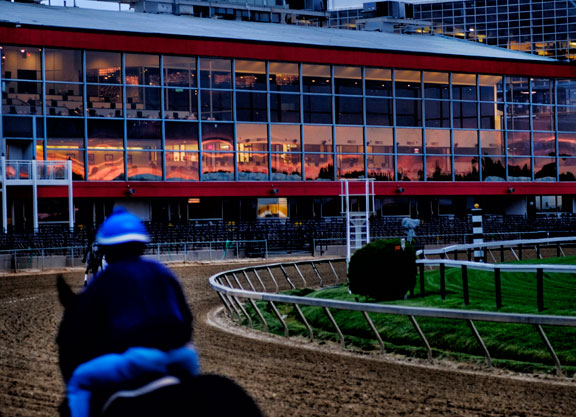 As a pre-emptive strike to keep the GI Preakness S. from being moved from its historic Baltimore home, civic leaders filed a Mar. 19 lawsuit against the owners of Pimlico Race Course that petitions for “condemnation” of the track, which is the legal term for the taking of property by eminent domain.

Tucked in near the end of the civil complaint filed in Baltimore City Circuit Court is a one-paragraph demand that largely escaped scrutiny in the initial reporting of this case: The plaintiffs want not only the track's physical property, but also the “trademarks…and other intangible and intellectual property…associated with the Preakness.”

Is this a valid legal argument? Can the city really lay claim to the naming rights and brand of the second jewel of the Triple Crown even though it is a federally registered trademark that belongs to the Maryland Jockey Club (MJC)?

The answer is yes, according to two Washington, D.C., attorneys who specialize in trademark law–although both experts told TDN that the complexities of the case will make it challenging for the city to prove its point.

“Theoretically, legally speaking, this could happen,” said attorney Josh Gerben. “But it's a very high bar that the city would have to hit here…. Basically, the question is, 'Does the city of Baltimore have [such an] overriding public interest that it could actually acquire the trademark by force?'”

Attorney Michael Kondoudis agreed: “The key is this: Trademarks are treated as property, just like a piece of land,” he said. “And that last count [in the lawsuit], which isn't laid out in much detail and looks like it was tacked on at the end, actually could be troublesome and the most contentious part of it.”

In separate phone interviews, both trademark lawyers pointed to sports-related cases involving the 1982 relocation of the NFL's Oakland Raiders to Los Angeles and the 1984 move of the Baltimore Colts to Indianapolis that could be relevant in the Preakness suit.

Although those legal seizures over control of the franchises failed (in general, because the plaintiffs couldn't prove that their state's interest outweighed the interstate commerce burden on the NFL), Kondoudis said those precedents “support the proposition that seizure of a professional sports team's trademark is possible, contingent on the satisfaction of certain requirements.”

Kondoudis said the question of jurisdiction will be the major factor in the Preakness trademark case. The complaint was filed in a Baltimore court, which only has jurisdiction over Baltimore property. And according to the United States Patent and Trademark Office, the owner of record for the “Preakness Stakes” trademark is “Maryland Jockey Club of Baltimore City.”

The question of jurisdiction could have been different, Kondoudis said, if co-defendant The Stronach Group (TSG), which owns the MJC, had instead been listed as the trademark's owner, because TSG's principal place of business is in Canada–well outside the jurisdiction of the Baltimore court.

TSG could try to retroactively amend the trademark ownership or even try to get the venue of the court changed, but either way, jurisdiction “is certainly going to be something that will be litigated, I can tell you that,” Kondoudis said.

“This is gong to get highly contentious, and to be honest with you, most judges don't like these types of cases because they don't like infringing on private property,” Kondoudis said. “It generally offends our notions of fair play. But [eminent domain] is authorized, and it does happen, and this is a definite risk. And so Pimlico and [TSG]'s legal team need to take it seriously, because it does look as if [based on] where that trademark is said to be owned and located, their trademark could be attached to the case. And that's bad news. Because even if they didn't have to run any more races at the track, the only one that matters is the Preakness. That's the essence of branding. A race by any other name is not the Preakness.

“This is me speculating, but I would think they would not be all that concerned about losing the [physical Pimlico] property [in exchange for just compensation],” Kondoudis continued. “Let's be honest: It's a dump. How could you really sell it? It may take years to sell to somebody who would redevelop it. But that last count, for that trademark, is the one ironically that could be the sleeper out of all of this, because that name means everything.”

And what would be a viable defense for TSG and MJC?

“The best thing they can do is work with the city to try to find some way to settle this, which I think is the intent behind the complaint in the first place,” Kondoudis said. “I cannot believe the city wants that property. [The city] wants the track to be running, they want the revenue, and they want the prestige that goes with [the Preakness].”

In general, Kondoudis explained, eminent domain seizures are problematic for defendants, regardless of whether they involve physical or intellectual property.

“When there's a valid taking through eminent domain, the private party's hands are pretty much tied. All they can do is fight about the amount they receive for it,” Kondoudis said. “And so what is the [defendants'] last line of defense? They need to come up with a number, and justify a monetary amount.