Can Analyze It Seal the Deal in Secretariat 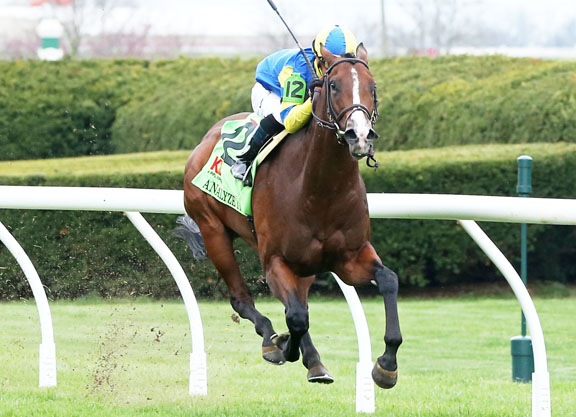 If there were in-running betting, 'TDN Rising Star' Analyze It (Point of Entry) would have been minimum odds inside the final 100 yards in the GIII Pennine Ridge S. and last time in the GI Belmont Derby. But he was caught each time by the Travers-bound Catholic Boy (More Than Ready) and there appears to be no great margin for error as the favorite in Saturday's Secretariat S. at Arlington, arguably the most interesting of the three Grade Is.

Possessed, when needed, of a rare combination of early speed and an outstanding turn of foot, the $190,000 OBS March graduate romped home to defeat Captivating Moon (Malibu Moon) in Keeneland's GIII Appalachian S. Apr. 6, but elected to sit off Catholic Boy in the Pennine Ridge and the Belmont Derby. It appeared those tactics would prove successful, but he failed to put Catholic Boy away and went down to narrow defeats each time.

Hunting Horn (Ire) (Camelot {GB}), sixth in the G1 Prix du Jockey Club June 3, returned to England and turned in one of the more visually impressive scores at Royal Ascot, breezing home to take the newly graded G3 Hampton Court S. by 4 ½ lengths from close range. He couldn't quite gain on the top two in the Belmont Derby, but certainly wasn't disgraced in third. Trainer Aidan O'Brien is a four-time winner of the Secretariat.

'TDN Rising Star' Untamed Domain (Animal Kingdom) is an intriguing option, even if his morning-line odds of 5-1 would represent an underlay. Winner nearly in spite of himself of last year's GII Summer S., the bay closed well to finish runner-up to Mendelssohn (Scat Daddy) in last year's GI Breeders' Cup Juvenile Turf. He has yet to win this season and will need a career effort to win this, but his last when sixth–placed fifth–in the GIII Kent S. is far better than it looks and 10 furlongs over ground that should be fast enough could be exactly what the doctor ordered.

Bandua (The Factor) won his first two career starts going this distance and was listed as a GI Belmont S. possibility before connections opted to remain at home. Eighth in the G1 Irish Derby over a mile and a half and fifth as the favorite in the 14-furlong Listed Vinnie Roe S., he drops back to his winning distance for this. Trainer Dermot Weld won the 2008 Secretariat with Winchester (Theatrical {Ire}).