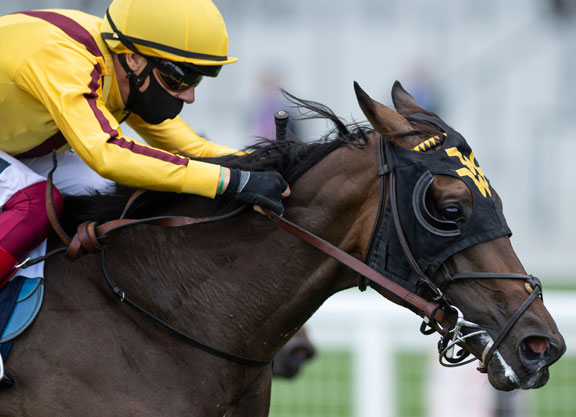 No one could win from stall one.

That's what Stonestreet Stables' Barbara Banke heard throughout the Royal Ascot Meeting as she prepared to watch her juvenile filly Campanelle (Ire) (Kodiac {GB}) make her second lifetime start in the G2 Queen Mary S. on the final day of the meet.

“All during the week I kept hearing that nobody was winning from the one post position, and that we probably couldn't either,” Banke said.

So from California, the top American commercial breeder set her alarm for before the crack of dawn to watch the filly go off as the second choice favorite at 9-2 and then, under Frankie Dettori, fight past her rivals and sail to victory.

“Lo and behold, she managed to make a really strong run for it,” Banke said. “I think if she had been in a better post position, she probably would have won with even more lengths of separation.”

“That was so unexpected and so spectacular,” Banke recalled of Lady Aurelia's Queen Mary S. “I've never seen any horse win a long sprint like that. We knew that she was super fast and she had some great competition that day, but I've never seen anything like that win. They called her a flying machine, and I think that's about right.”

Since that memorable day for Stonestreet Stables, the organization has been on the lookout for another filly that could give them a repeat victory in the prestigious race. They found such a horse last October in the first book of the Tattersalls October Yearling Sale, when Ben McElroy purchased Campanelle for 190,000gns.

“Ben McElroy was over at the Tattersalls sale,” Banke said. “He told me, 'There's one horse that we just absolutely have to buy, because she could be your Queen Mary winner.' So I said 'Well, we have to do that then.' And she was perfectly well-balanced, and was well-bred.”

After her purchase, the yearling filly caught a flight to Ocala, Florida to begin her initial training at the Stonestreet Training Center.

From there, she was moved to the barn of juvenile specialist Wesley Ward in February.

“Ben McElroy did such a great job picking out such a talented filly,” Ward said. “It made my job easy. All I had to do was keep her on a weekly schedule, and she did the rest. Every work was better than the next. All the competition I put her with, she was easily better than, which instilled confidence in her.”

As the filly progressed, Banke received continual notes that the filly showed promise.

“Wesley was fairly effusive about her. Of course sometimes he's effusive about everything,” Banke quipped. “But he said that she was really doing well and we were going to try to get her to Ascot. This year was so tough with the Coronavirus and having to get a race into these two-year-olds before you ship them over.”

They found a spot for the filly to make her first start on the last day of May at Gulfstream Park. She was the first to take the lead in the five furlong maiden race and never looked back, beating the rest of the field by over three lengths.

From there, the wheels were put in motion for a trip overseas for the Ascot meet.

“We only had three weeks or less until the race,” Ward said. “Shipping from Miami to England was a little bit of a concern, going from a tropical climate over to a nice, cool one in London. But she took to it, and thrived. She broke out of the gate with Frankie Detorri and went straight to the winner's circle.”

Banke said that they had always felt like Campanelle had the potential to be a top-class turf sprinter.

“She has a lot of that strength in the hind end that you need for getting up that hill at the end,” she said. “And we had experience with Lady Aurelia, so we knew that she was that kind of filly.”

Of course, keeping the same world-class trainer and jockey duo can only work in your favor when attempting to pull off a repeat victory.

“Wesley has been good friends with Frankie for a long time,” Banke said. “Frankie was the assistant trainer for Lady Aurelia one summer when we wanted to leave her over there and not bring her back and forth. So we knew Campanelle was in good hands. Wesley just says, 'You know what to do,' and of course he does. So it worked out very well.”

Since her break-out achievement at Ascot, Campanelle has returned to the States and is back at Keeneland, Ward's home base in Lexington.

“She looks like she hasn't even ran,” Ward said. “Some of these good horses, they can take everything in stride. So hopefully she progresses to keep doing great things for us. The way it looks right now, she's going to.”

What's the next step for this promising two-year-old?

“We won the G1 Prix Morny in Deauville with Lady Aurelia,” Ward said. “It's a six furlong race, and Lady Aurelia was more of a five furlong horse. She was just so good at the time, that she stayed the extra furlong. But Campanelle looks like she's going to appreciate the added distance.”

Ward said he is hoping that by the time the calendar turns to August, he might be able to make the trip along with the filly.

“I look forward to getting to fly back over to Paris with her and hanging out on the beach for a couple days,” he said. “Hopefully, she can do the same thing as she did in her first two starts. From everything I've seen and the ability she's shown, her figures show that she's going to be pretty tough to beat.”

Banke is starting to sketch out long-term goals for the star filly.

“Maybe a Cartier Award would be nice,” she said. “We can see what happens after the Prix Morny, if we want to go to the Breeders' Cup with her. There's plenty of good turf racing [in the U.S.], so we'll target a few of those races.”

In the future, Banke said there are several international races that she hopes Stonestreet can claim some day.

“I would love to win group ones in longer races in England and Ireland,” she said. “We have a few horses picked out that are in training right now and could possibly do that. And then, I'd love to win a group one in Australia as well.”

Banke also said that the goal is to continue increasing international exposure for Stonestreet's red and gold silks both as a business tactic and to better the farm's bloodlines.

“I think this is an increasingly global business, especially in bloodstock,” Banke said. “We have a wonderful broodmare band here, and we like to get outside influence. Australian, New Zealand, German, South African, or in the case of Campanelle, Irish. We also really enjoy racing in Europe and Australia. The turf sprint, I think, is increasingly a very global race, and we can go a lot of places to have that kind of racing experience.”

As for Stonestreet's most memorable turf sprinter to date, and the first American-trained horse to win a Cartier Award, Lady Aurelia now resides at Stonestreet Farm in Lexington, and is just beginning her career as a broodmare.

“She's relaxing. She's doing well, thriving,” Banke reported. “She's in foal to Curlin (Smart Strike) and is expecting a colt, that'll be very exciting. I hope to see her later today,” she added with a smile.

If Campanelle can continue to follow the path paved by her Stonestreet predecessor, there will be much to look forward to in watching the career of the Irish-turned-American Ascot winner.