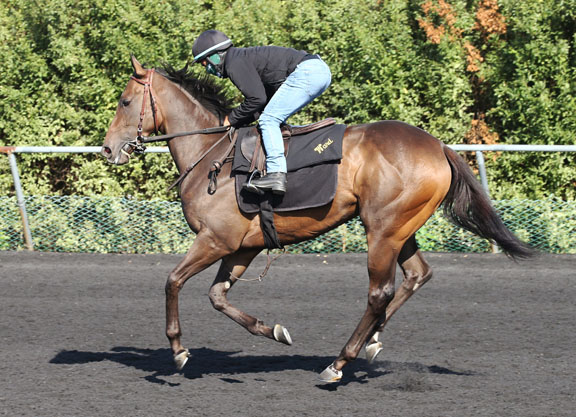 Campaigned by Stonestreet Stables, the Wesley Ward-trained filly broke her maiden at Gulfstream Park May 31 before taking the G2 Queen Mary S. during the Royal meeting at Ascot June 20. In her latest start at Deauville Aug. 23, she gave her trainer his third victory in the G1 Darley Prix Morny.

“We took her out of the Cheveley Park,” confirmed Ward. “I just felt I’d like to keep her under my thumb a little bit before going to the Breeders’ Cup. I think this filly could be something really special and I don’t want to ship her over and back again before the Breeders’ Cup. By keeping her [in America], we have a good couple of months to make sure she’s at her very best.”

In regards to her juvenile campaign thus far, Ward added, “She’s done everything we’ve asked of her–she’s three for three. We were struggling to find a turf maiden for her, eventually we did at Gulfstream and it was only 20 days between that race and the Queen Mary. With the shipping as well, I would never usually run them back that quick, so for her to go and win at Royal Ascot showed she’s a super good filly. And then she won much more impressively at Deauville after a good spacing since Ascot.

“It was a shame we couldn’t come over for York, but he’s a super quick horse, as he showed in his last race at Saratoga,” Ward said. “The Breeders’ Cup race for him is over five and a half [furlongs]. He’d prefer five as he has so much speed, but it’s his home track and I still think he’s going to be tough.”