Camelot's Luxembourg In Control In The Futurity Trophy 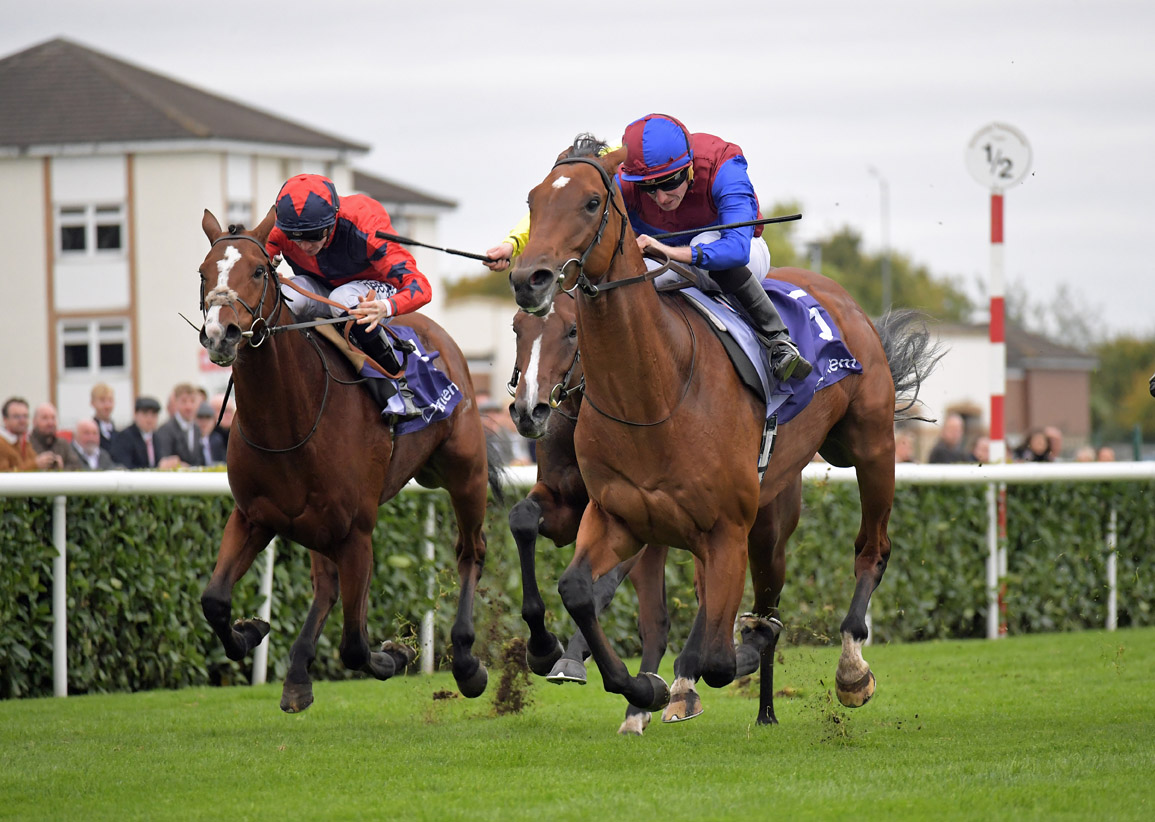 Backed down to 4-6 favouritism as the heavy-hitters came out to play on Saturday, the new beau of Ballydoyle Luxembourg (Ire) (Camelot {GB}) gave his supporters a comfortable ride in Saturday's G1 Vertem Futurity Trophy at Doncaster to head into winter quarters one of the leading members of his generation. Not the quicksilver he was when taking The Curragh's G2 Beresford S. on good going Sept. 25, the Westerberg colour-bearer instead moved through this soft-ground renewal with straightforward ease as Ryan Moore sought to collect without asking a serious question. After taking over passing two out, the rangy bay was quickly able to carve out safe advantage and extended that late on with a couple of light flicks with the whip to 1 3/4 lengths at the line. Compatriot Sissoko (GB) (Australia {GB}), who had helped force the pace, held on for second by a short head from Bayside Boy (Ire) (New Bay {GB}) after Luxembourg had secured a record-equalling 10th edition for Aidan O'Brien. “He's a really smart horse, very scopey and he travelled easy,” Moore said. “I lost my cover at halfway and I had to keep going. He took me to the front and when I asked him the question, he just waited a bit. I grabbed hold of the him the last 100 yards and he found a bit more. We're delighted with what he's done and he's an exciting horse to look forward to. It couldn't have gone smoother and there's more improvement to come.”

Luxembourg had not looked an obvious star on his winning debut over this trip at Killarney July 14, but that 2 1/4-length defeat of Tuwaiq (Ire) (Elzaam {Aus}) was followed by a performance of genuine dash as he put 4 3/4 lengths between them in the Beresford. Demonstrating an ability to accelerate sharply as he dispatched that rival and the eventual runner-up Manu Et Corde (Ire) (Teofilo {Ire}), he was following a familiar path to this taken in recent times by the likes of the stable's St Nicholas Abbey (Ire) (Montjeu {Ire}) and Saxon Warrior (Jpn) (Deep Impact {Jpn}). Kept back initially by Ryan Moore racing on the wing as Royal Patronage (Fr) (Wootton Bassett {GB}) was kept honest by Sissoko on the front end, the imposing bay went forward as if in a piece of work at Rosegreen and at no stage did this look anything other than a comfortable stroll.

With the last four winners of this race going to win either and English or Irish 2000 Guineas the following spring, there is certain to be much debate over the intervening period as to the prospects of Luxembourg following in the steps of his sire who came back from this to land the Newmarket Classic in 2012. Given the snug nature of his two pattern-race wins, he goes into the recess with confidence high and ego boosted. “What he's able to do over four furlongs at home says that he probably wouldn't have any problems starting in the Guineas if that's what the lads wanted to do,” commented O'Brien, who was drawing level with Sir Henry Cecil in the race's annuls. “He would have preferred a stronger gallop, but he's a high cruiser and he got there a little bit after halfway. He was very babyish in front, but he's a lovely horse.”

“He's been coming along slowly and he's got a lot of class,” the Ballydoyle handler said. “Ryan was impressed with him. He's always been very exciting. The work he's been doing he shouldn't have been able to do over four furlongs, but that is what good horses usually do. He has a big, open stride, but that's what good horses have. Like human beings–the good athletes cover the most ground, don't they?”

Wayne Lordan said of Sissoko, “Donnacha has always thought he was a very nice colt. He only won his maiden a week and a bit ago. It was huge step up, but he looked like he could run very well and Donnacha was duly right. He feels like he's going to be a better 3-year-old. It was a very good run going into the winter with prospects for next season.” Roger Varian was pleased with the effort of Bayside Boy, who was third again as he had been in the G1 Dewhurst S. “He's a smart colt and ran a good race,” he commented. “He was a touch unlucky. When he needed room he didn't have any. I don't think it stopped him winning, but he'd have been a good second with a clear run. We'll winter him and aim him at a Newmarket Guineas, because I think he deserves that.”