Camelot's Arthur Kitt an Emotive Winner of the Chesham 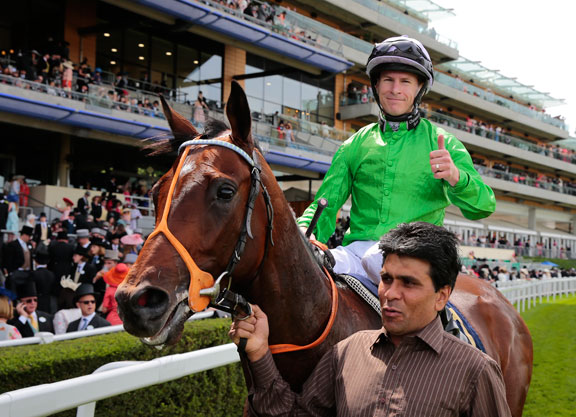 Royal Ascot's final day opened with one of the stories of the week, as Chasemore Farm's Arthur Kitt (GB) (Camelot {GB}) emerged from a story of genuine adversity to prevail in the Listed Chesham S. Having almost died at birth when his dam, the 2012 G2 Queen Mary S. heroine Ceiling Kitty (GB) (Red Clubs {Ire}) had to be euthanized, the winner needed resuscitating several times and had a twisted leg but came through all that to be raised by a foster mare en route to his eventual debut at Haydock May 25. Successful by 2 1/2 lengths in that six-furlong contest, the bay traded at 13-2 here and after being in touch early on the outer of the group racing up the centre was ridden before halfway and given reminders three out. Staying on stoutly to gain the lead with a furlong to race, he veered left but held on from Nate the Great (GB) (Nathaniel {Ire}) to score by a neck, with Duke of Hazzard (Fr) (Lope De Vega {Ire}) 3 1/4 lengths behind in third. The red-hot 5-4 favourite Natalie's Joy (GB) (Lope de Vega {Ire}) was only seventh.

For owner Andrew Black, the success of Arthur Kitt must have felt almost pre-ordained. “It's the most special moment,” he said. “I have more emotional attachment to him than I've ever had to a horse–the night he was born was such an incredibly difficult and painful time, so I always hoped he'd be special. He was always much more friendly than the other horses, which is often the case with foals raised by foster mares. I think Royal Applause was brought up by a foster mare. We put her to Camelot and I just thought we would win the Chesham and make it right somehow.” Chasemore Farm's in-house vet Patrick Sells was on hand to explain the details of the night in question. “We had the panic when we knew something badly had gone wrong, the sorrow when you know you can't save the mare, then the relief when the foal is responding to resuscitation–it took a good five minutes for him to breathe,” he said. “We were thinking of giving up and he was like a phoenix through the flames to get through that. The joy of then seeing him with his black-and-white nanny mare on the farm and he was always very calm and collected and this is the realisation of all our dreams. Andrew bred him for this race–and that is no exaggeration. Looking at Arthur now, the scope of him, I'll say he'll be a very exciting three-year-old.”

Trainer Archie Watson said of Nate the Great, “I couldn't be happier. I've loved the horse from the moment he came in the yard. I'm sure there's a lot of improvement in him. It may be that we just mind him now until the first mile stakes race and he's got a big future as a middle-distance horse next year.”