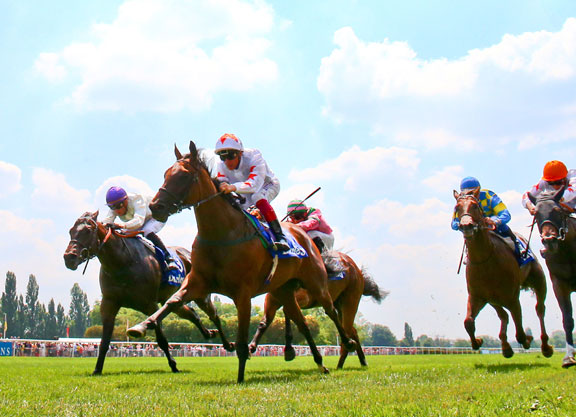 Signora Cabello (Ire) (Camacho {GB}), who posted a career high with a narrow victory in Royal Ascot's June 20 G2 Queen Mary S. last time, franked that effort with another game performance in Sunday's G2 Darley Prix Robert Papin at Maisons-Laffitte. The bay has not looked back since registering an Apr. 28 debut fourth at Beverley and also annexed a May 7 novice heat at Bath and York's May 18 Listed Marygate Fillies' S. in her penultimate start. She was alert at the break here and accepted a tow in second, positioned on the shoulder of G2 Norfolk S. runner-up Pocket Dynamo (Dialed In), through the early stages of this first overseas foray. Stoked up to gain a slender advantage soon after passing halfway, the even-money favourite did not require the full Frankie Dettori treatment when strongly pressed inside the final furlong and was ridden out to hold the late surge of Sexy Metro (Fr) (Diamond Green {Fr}), a shade cosily, by a neck.