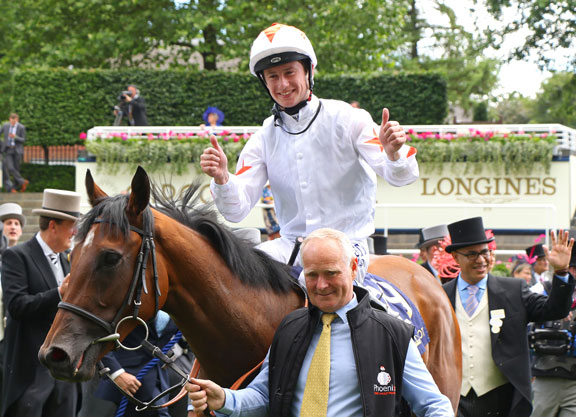 Yorkshire-based trainer John Quinn had captured the G2 Coventry S. with the Al Shaqab purchase The Wow Signal (Ire) (Starspangledbanner {Aus}) here in 2014 and pulled it off again on Wednesday as Signora Cabello (Ire) (Camacho {GB}) justified the recent investment of Phoenix Thoroughbreds to win the G2 Queen Mary S. for the North. Sent off at a bewildering 25-1 considering her connections and the fact that she came here off a win in the Listed Marygate Fillies' S. over this five-furlong trip at York May 18, the bay was rousted along from the break by Oisin Murphy and raced prominently in the centre as the 10-3 favourite and TDN Rising Star Chelsea Cloisters (First Samurai) blew the start. Driven into a narrow lead from Shades of Blue (Ire) (Kodiac {GB}) inside the last 100 yards, she held off Ballydoyle's Gossamer Wings (Scat Daddy) in a pulsating finale by a short head, with the same margin back to Shades of Blue in third. Yorkshire-based Quinn was not among the surprised. “All she did was improve and she got hampered at halfway at York but was still well on top at the line,” he said. “She has trained lovely since and is very unassuming, but keeps pulling it out. She is terribly tough and we have real belief in her.”

Introduced at Beverley Apr. 26, Signora Cabello ran a respectable fourth there before winning at Bath May 7 and proving well up to black-type standard with a game defeat of two of these rivals Daphinia (GB) (Kuroshio {Aus}) and Snazzy (Ire) (Kodiac {GB}) in a competitive Marygate on York's Knavesmire. There were a flurry of challengers to deal with here as well but again she refused to buckle under pressure, demonstrating a courage that can only be inherent at this fledgling stage of her career. “Signora Cabello is very laid-back, but she does help you,” Quinn added. “Even today, she was very relaxed. She has a very good mind and she has plenty of ability.” With a quarter-share still with her original owners Zen Racing, made up of Ross Sankey and Chris Edwards, the winner is set to take that partnership on a thrill ride now. “Phoenix Thoroughbreds enquired about the filly two weeks ago and bought her a week ago,” her trainer said. “Ross and Chris are currently in Barbados watching the cricket! This is the first horse we have bought for them and my son Sean bought the filly for them at Newmarket as he loved the pedigree. Signora Cabello is in everything, but we'll see how she comes out of this before making a definitive plan.”

Oisin Murphy added, “This is the Olympics of flat racing, the most important week in British flat racing for sure and to ride a winner here is a dream come true. I came agonisingly close yesterday in these colours on Advertise. I would just like to thank John Quinn, Dermot Farrington and all of the Phoenix Thoroughbred operation for letting me ride their horses at the moment. It is a dream come true. They have a very exciting bunch of horses.” Shades of Blue's trainer Clive Cox was delighted with the third and commented, “She's very strong and a proper two-year-old. I don't think there's any doubt she's all speed and we won't be experimenting by going any further up in trip. It was a great run and fair play to the first two–she deserved to be bang up there. She's been beaten two short-heads and while it is not an excuse it would have been nice not to have been drawn on the wing. Last year we took Heartache to the [G2] Prix Robert] Papin after she won here, but there are all sorts of options for this filly.”

Signora Cabello is another advertisement for Camacho after the G1 Poule d'Essai des Pouliches heroine Teppal (Fr) and is the last known foal out of the G3 Princess Margaret S. runner-up Journalist (Ire) (Night Shift). She has produced three other black-type performers including the G3 Firth of Clyde S. third La Presse (Gone West), while her half-brother Sheer Viking (Ire) (Danehill) captured the G2 Flying Childers S. and was second in the G3 Norfolk S. here. The third dam was responsible for the G1 1000 Guineas and G1 Phoenix S. winner Las Meninas (Ire) (Glenstal) and her descendants include the high-class sprinter Kingsgate Native (Ire) (Mujadil) who took this meeting's G1 Golden Jubilee S. and the G1 Nunthorpe S. Click for the free Equineline.com catalogue-style pedigree.